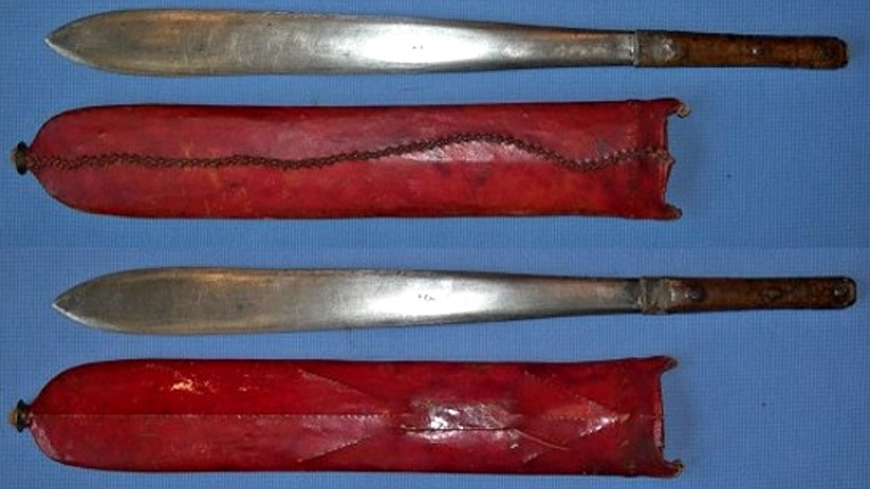 The seme (ol alem), or lion’s sword, is the constant sidearm of the Maasai man. It is a light short sword with a double-edged, leaf-shaped spatulate blade, often made from spring steel.

The Maasai use this blade for everything from clearing brush, butchering cattle, to peeling fruit. They also use it for self defense.

Before to talk about Maasai weapons it is important to describe who they are, their traditions, customs and habits of this famous people.
Maasai are a population living on the highlands around the border between Kenya and Tanzania. They are often considered nomadic or semi-nomadic people, but nowadays also breeders practicing the transhumance, and often settled in particular areas, mostly in Kenya.
The transition to a settled life style happened together with the transition from the breeding to the agriculture as primary source of sustenance; this transformation is evident in the Maasai clans of Kenia as the Kaputiei, Matapato, Kikunyuki, and the Arusha in Tanzania. 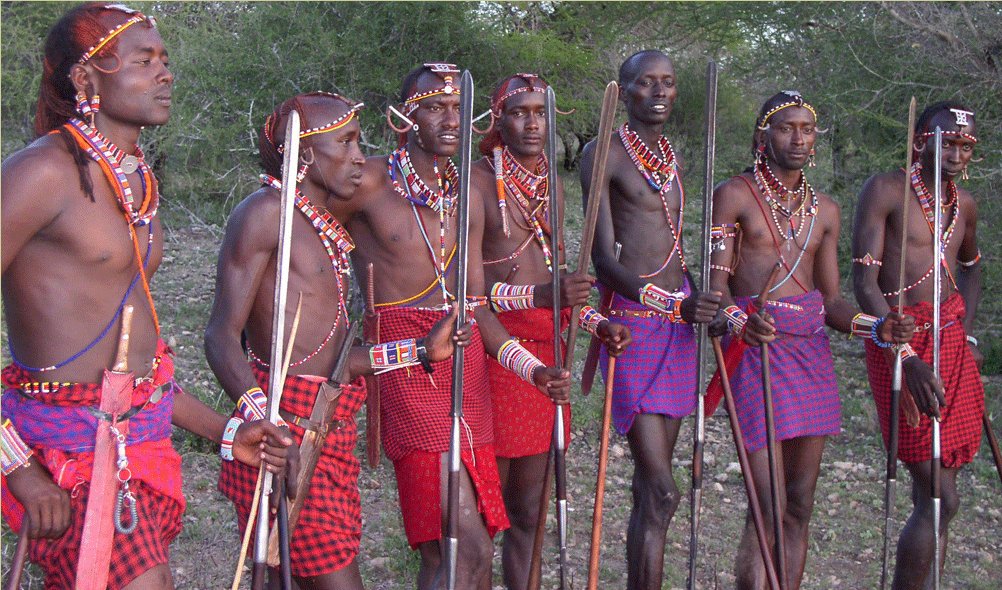 Maasai are traditionally shepherds and their culture revolves around the care of the cattle. They have been semi-nomadic people for generations, following the seasonal rains of the Eastern Africa and moving their herds from a place to another to allow the grass to grow up again.
Their life style was made possible by a community management of the land, that guaranteed to everybody free access to the water and the grazing lands.
Maasai Joseph Ole Simel states "According to our traditional philosophy, the land does not belong to any person: it belongs to the living and the dead and the unborn people".

Breeding has always played a central role in the Massai life. Cattle are the basis of the Maasai economy, providing food (in the form of milk and blood), and property for payment of bride price. Today again the wealth of a man is still valued in terms of cattle and sons; persons, families and clans establish intimate bonds by giving away or trading cows. Maasai also breed goats and sheeps, not only cattle.

Row meat, milk and animal blood were the basis of the traditional nutrition but in the last decades Maasai became more dependent on other food as corn, rise, potatos and cabbage.
While cattle constitute the primary source of food for the Maasi, it is less well known that they obey strict dietary habits forbidding them for instance to consume milk and meat in the same day. They also observe a taboo against eating fish. 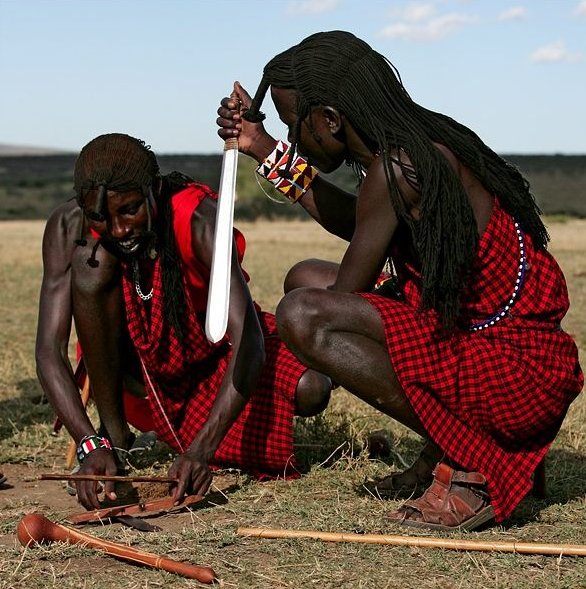 Maasai speak "maa", from which the name of the ethic group is derived. The language belongs to the group of the nile-saharian languages, the same branch of the languages spoken by the Pokot, Dinka and Nuer people. Maasai are the nilotic population living in the most southern area of Africa.
Nowadays they are divided in twelve primary clans.

Maasai are monotheist and believe in Enkai, a god that reveals in different colours according to his mood. God is black (narok) when he is kindly or friendly, red (nanyokie) when he is irritated. The real nature of god is difficult to understand, but it is known that Enkai is mostly parnumin, a multi-colours god, it means a complex realty. God loves every human being and help him in case of need. In this good thing, god is helped by certain spiritual beings, some of which are sent by god to follow the human events in the earth.

Maasai men belong to age groups that determine their status, each age group being set apart by a distinctive style of weapons. At the age of about 15 to 21, Maasai youths (called layok) are initiated into the status of young manhood (called moran), at which point they are first allowed to wear swords.

Swords are not commonly found amongst the people of the more northerly regions of Eastern Africa, even if Baker lists a long bladed knife or sword in his 1866 description of the Lotuxo of southern Sudan. However, taking as a model the classical Maasai sword, ol alem, with its red leather sheath and spare, elegant blade flaring slightly towards the tip, weapons of broadly similar type are found in a wide belt of Eastern Africa from the Victoria-Nyanza in the west to Swahili coast in the east. Such swords would normally be used as a slashing weapon. The older style of Maasai sword may be roughly classified in groups of long, middle-sized and short weapons, though there is little documentation to say whether a certain type was the preferred weapon of a particular age group.
Leakey relates that among the Kikuyu the warrior’s sword, ruhiu rua Njora, was longer and thinner than that commonly used by the elders. He also maintains that Maasai living in the adjacent areas to the Southern Kikuyu exclusively commissioned Kikuyu smiths to the manufacture of their swords. However, Nerker’s work confirms that the kunono, the Maasai smiths, did make swords and that, as in the case of spare blades, it is possible to distinguish between these and weapons made by Bantu smiths. The cross section of a sword made by the kunono of the Kisongo Maasai has the appearance of a twisted rhombus, whereas that of a sword of Bantu manufacture is virtually symmetrical. Both types of sword show a median ridge and this a characteristic of all the other weapons of the region.

In more recent times bush knives (Pangas) have been imported form Great Britain and have formed the basis from which smiths produces swords in the older style. The main difference between the old and the new is that the blades of the latter are completely flat, lacking any sort of median rifge. The leather-covered wooden grip is also smooth in the newer versions, as opposed to the ribbed hilts of many of the older swords.

The production of sword sheaths and belts was a complex process. Strips form particular parts of an ox hide would be taken along with the craftsman by his client, together with the sword itself and two splints of wood to make the armature of the sheath. The hide would be left to soak in water. Meanwhile, the two pieces of wood would be carefully shaped to leave slight lip at either side of the aperture at the top, and to taper slightly towards the point. Thin string made out of sinew would be bound around the tip, brought roughly two thirds of the wayup to centre of the sheath, then passed several times through both pieces of wood, thereby securing in its final position a small strip of leather which form the basis of the eye through which the sword belt would eventually pass.
The thread was then run almost to the top of the sheath where it was wrapped several times around both pieces of wood, then knotted and cut. At this point the first step would be taken in creating the embossed decorations which can sometimes be seen on the older sheaths. A number of little pieces of string would be arranged in sunburst patterns on the surface of the wood. One such arrangement might radiate downwards from the top of the sheath, another from the bottom of the eye. 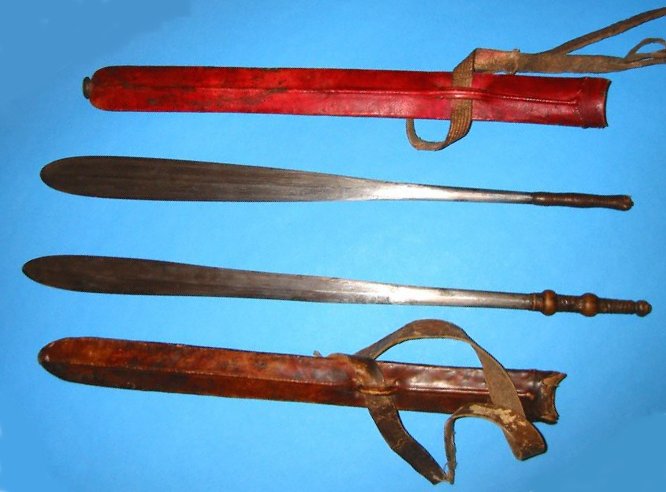 The soaked hide would be laid on a board and the prepared sheath placed upon it with decorations and eye downwards. The craftsmen would then calculate exactly where to cut the thin hide so that there would be just sufficient to meet in the middle of the upper side of the frame when both sides were pulled together with thread.
Stitching would commence, the craftsman turning the sheath over when he came level with the eye, then cutting and sewing the leather to form a hole large enough for the client’s belt to pass through. Once the stitching was complete the hide would be allowed to dry, shrinking tightly onto the wood frame and showing up the underlying sunbursts of string and embossed patterns. The sheath would be dyed red with an extract which among the Sothern Kikuyu came from a root of the gakaraku kairu mixed with water, sugar cane juice and soda (Leakey, 1977).
The Elgeo obtain a similar dye from the stem of the chesalei plant which is chewed, spat out and mixed with ashes (Massam, 1927). The finishing touches to the embellishment might be made by adding a metal button or coin to the point of the sheat, winding it with brass wire and perhaps adding a bunch of small pieces of chain or the tail of a monkey. 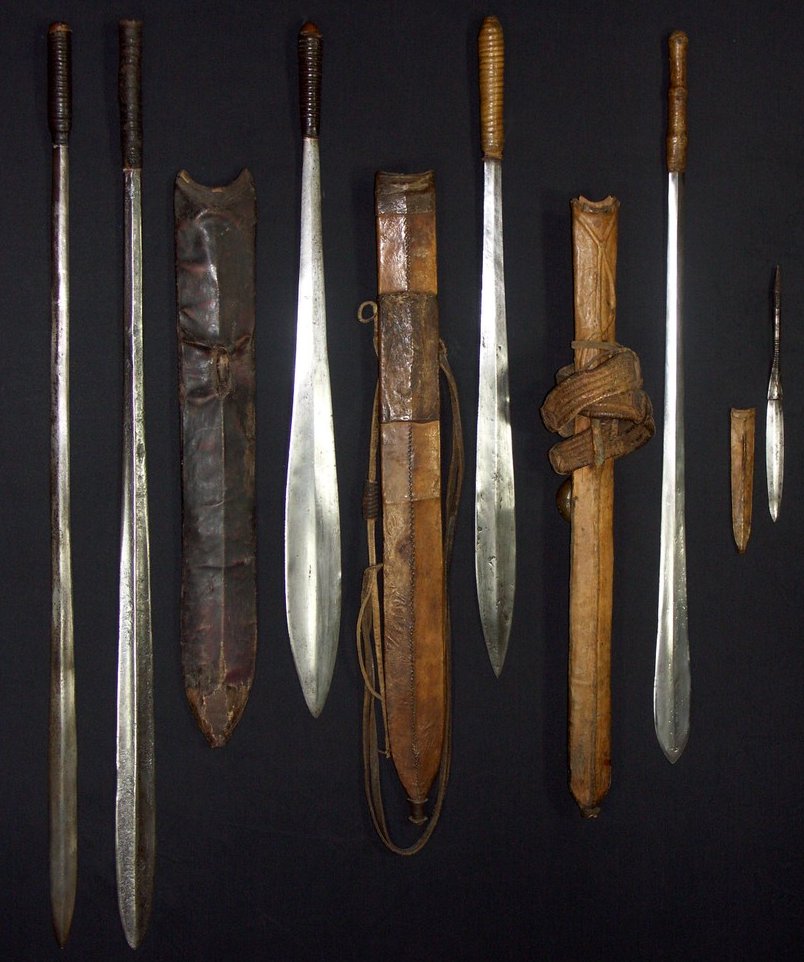 When the young moran sheathed his sword for the first time, the sharp blade would cut the now redundant pieces of sinew which had been used in the early stages of the sheath’s construction.
Ribbed leather sword belts, often inset with beads, are characteristic of the Massai and Kikuyu.
The belt would be worn by means of a soft leather thong which would be passed between the eyelets end and knotted in the middle. The sword in its new sheath and belt would be worn, as a further symbol of his status, on the right hip of the moran or the equivalent warrior grade among peoples other than the Maasai. 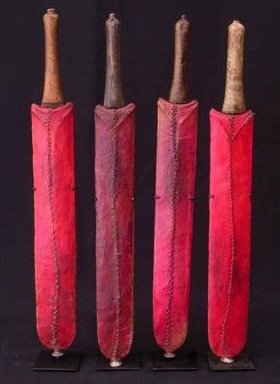 In addition to the traditional sword, Maasai shepherd and warriors also carry a spear and sometimes a throwing wooden club called rungu.

The spear is the pastoralist’s weapons for excellence. The shepherd uses it to defend his livestock, the community and himself against wild animals and cattle raiders.
It is often difficult to determine the tribal affiliation of either the manufacturer or the likely user. Smiths produced spears in a number of different styles to satisfy the needs of clients throughout a broad catchment area and the tastes of those clients have changed over a perido of years.

The Turkana spear (akwara) may be up to 8 feet in length and comprises a long top and bottom section of iron which is socketed onto a short central section of acacia wood and secured with hardened wax. The small razor-sharp leaf-shaped blade is sheated in a thin, leather thong when not in use. Each Turkana household will have at least one spare kept in the roof and spanning the room from wall to wall, its blasìde facing the door way ready to repel a surprise raid. The Turkana is the spear of the adult male and is presented to him when, after initiation, he has attained the status of a warrior. Before the initiation he is armed with a shorter spear used to protect the family herds from wild animals.

In the southern Sudan a similar spear (same length) with broader blade is characteristic of the Dinka people and the Shilluk among whom the lower section and butt of the spear is decorated with ostrich feathers. Two or three smaller spears are often carried by Dinka and distinguish three shapes where the blade flares before joining the socket: heart-shaped, spoon-shaped and shovel-shaped. 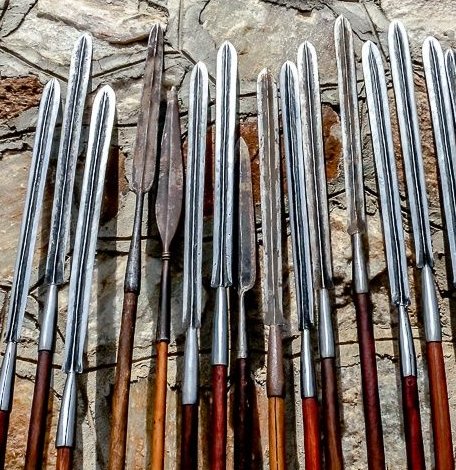 The rungu is a wooden throwing club or baton bearing special symbolism and significance in certain East African tribal cultures. It is especially associated with Maasai morans (male warriors) who have traditionally used it in warfare and for hunting. It is a commonly encountered tourist souvenir in that part of the world. 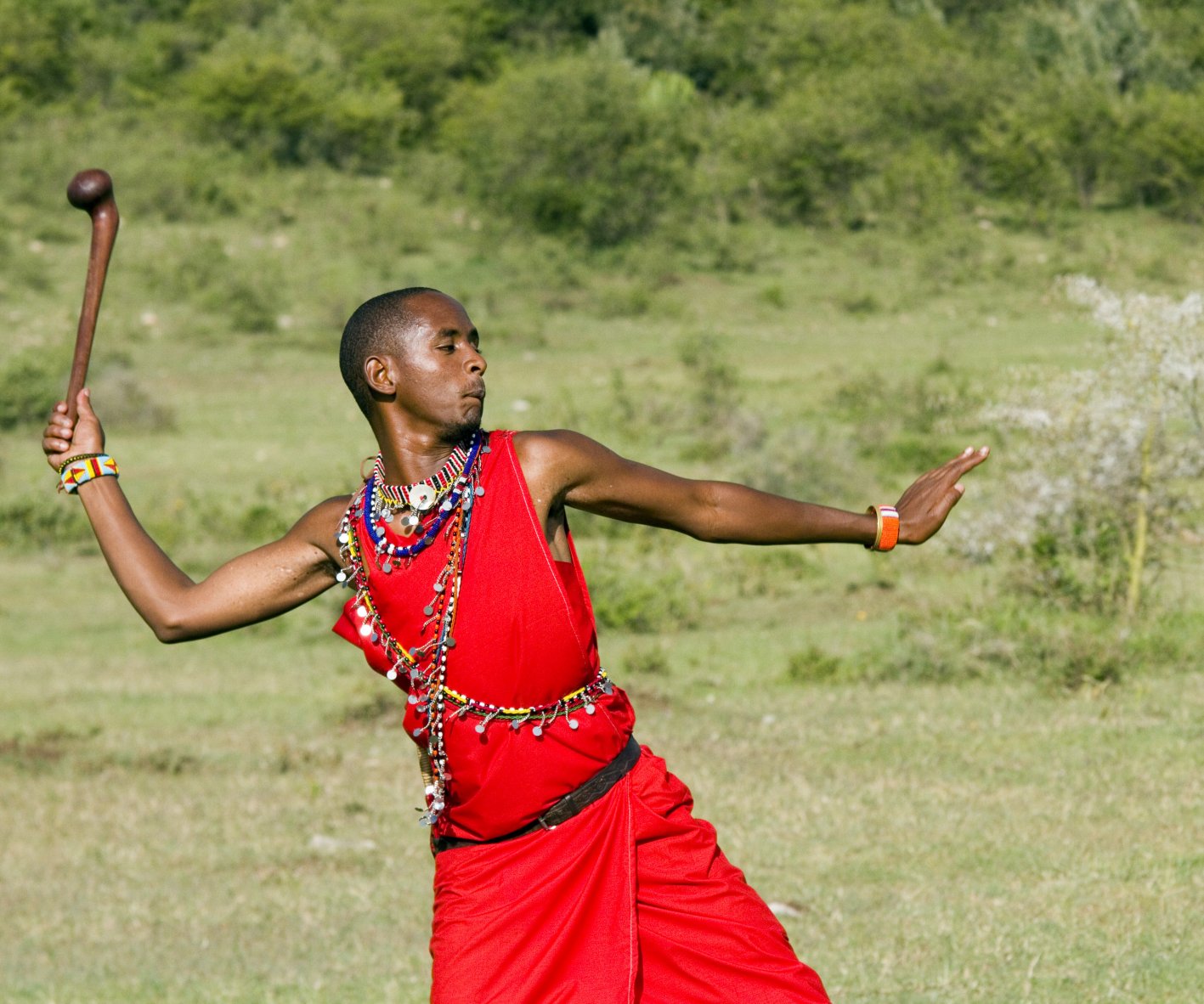 Rungus are typically about 45–50 cm (18–20 inches) in length with a long narrow shaft for a handle and heavy knob or ball at the end in the manner of other indigenous cudgels such as the Irish shillelagh or South African knobkierie. In Maasai culture, the rungu is an important emblem of warrior status for young males.