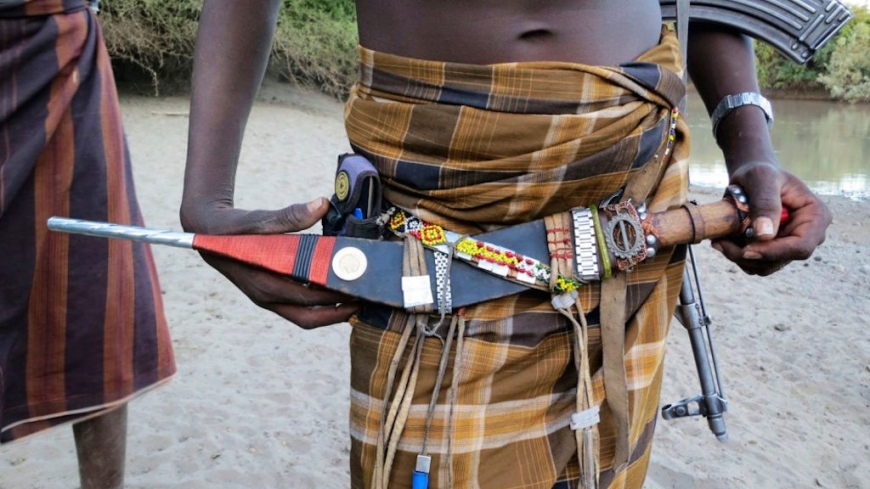 The gile (Afar: guile) is the typical knife of the Afar, tribal people of Africa.

This large and showy knife, sometimes a bit longer than half a meter, is maily worn as an ornament or a prestige object. At war the gile become an effective defense weapon. The gile is also carried by the Issa people of Djibouti state, adjoning Eritrea.

The Afar (Afar: Qafár), also known as the Danakil, Adali and Odali, are an ethnic group of nomadic tribes of Muslim religion, inhabiting the regions of the Horn of Africa. They primarily live in the Danakil Depression, a desertic area considered as one of the less hospitable place of the Earth, with depressions that reach 150 meters below sea level. The hot air burning the desert and the salt lakes can reach 65° C. Earth’s crust appears to be ripped and eroded sometimes by the action of tornados and storms triggered by the Kashim, an active volcano. In this area we find the lower point of Africa, the Assal lake, located at 155 m below the sea level.

Mostly part of the Afar are shepherds addicted to breed sheeps, goats and cattle which represent their primary source of sustenance as well as picking salt and trade. They move on a wide area including regions of Ethiopia, Eritrea, going up to Somalia through the state of Djibouti.
Afar people also walk long distances and use dromedaries for bringing merchandise and materials expecially during the transhumance. They show a dark reddish skin, wolly and curly hear and are generally higher than other african people and have narrow noses.
They are a proud and bellirerent population. Besides knives and lances, they often own Kalashnikov rifles. The men of the Afar’s tribes are well known for martial prowess. They boast a wide inventory of war dances and battle songs.

The lack of water in the territories of the Afar has become cause of conflicts between Oromos and Afar or between nomadic and sedentary tribes. This situation has brought to an army war lasted from beginning 1992 to February 96. Oromos and Issas are the historical enemies of the Afar.

Afar are generally surly with strangers and keep their distance. Socially, they are organized into clan families and two main classes: the asaimara ('reds') who are the dominant class politically, and the adoimara ('whites') who are a working class and are found in the Mabla Mountains.
Afar’s houses appear as islets in a sea of savannah and sand. Wooden structures covered with mats forms the tends. If the wood lacks, they use dry grass and lava to build a shelter.
Afar language has a latin alphabet and is written only for 20 years now, therefore we know very little about their historical origins. There are two hypothesis: according to the first the Afar descend from arabs mixed with a caucasian ethnicity, migrated from arabic peninsula and actual Yemen towards Africa.
The second hypothesis, also supported by some Afar people, says that this ethnic group should always lived in this reagion of the planet. If that’s true, Afar could be considered as the ancestors of the modern man. In fact, just in Hadar, right in the middle of Afar’s area, paleontologists found Lucy, the oldest human skeleton brought to light.

Characteristics of the gile

It has a large curved iron blade with double cutting edge (it is a dagger). Nowadays the blade is often obtained from metal plates recovered from leaf spring suspensions found in cars and truck wreckages. Infact, due to the poor availability of metal in the areas inhabited by Afar, a car or truck wreckage can be a useful source of metal for building tools.
The sheath/scabbard is generally made by a wooden structure wrapped by leather skin, sometimes adorned with leather or tissue stripes. Brass plates can be present on the scabbard expecially on the top area close to the handle. The scabbard always ends with an extra long tip, sometimes embellished by a metal upholstery that can have an enlarged part on the end point.

The sheath is often attached to a leather belt with circular or square buckle. Handle and sheath can be encircled with brass-plating. 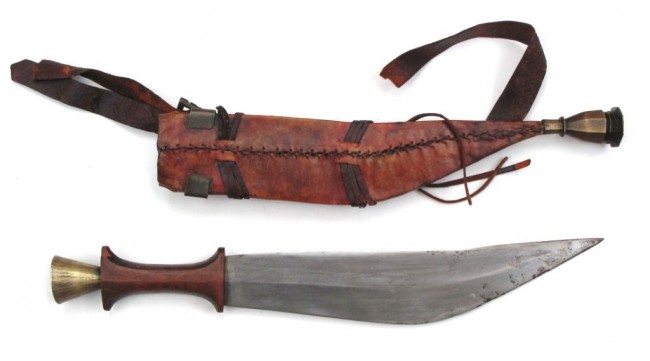 The handle is usually made in wood and rarely in horn. In the first case handle’s round sections can be coiled by a tin brass wire. Some giles have a truncated brass cone fixed on the handle probably for aesthetic purpose.
There are many variations of the gile, few of them have both the handle and the scabbard made in aluminium and usual brass parts can be missing, but the constant is the tipical curved iron blade and the skin leather scabbard. Another common thing is the leather belt sewn or bound to the scabbard. 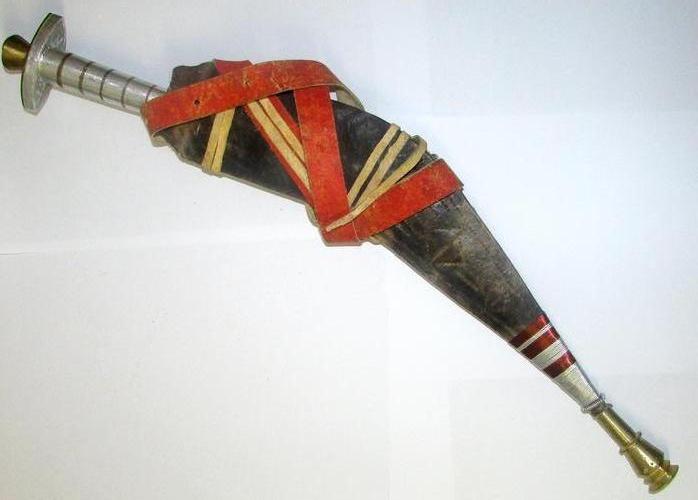 Old and worn out gile knives are often sold to the merchants who then sell them as souvenirs to the tourists that visit towns as Asmara or Addis Abeba in Ethiopia. Expecially in mid 90s the gile had become a searched and cherished object by tourists.

Old giles are not easy to find in the field but rather in some shops of Addis Abeba. In this case an old gile could be difficult to export because at the airport the custom can stop you and prevent to carry with you. A new one is not a problem. For an old one they say it is a national heritage. Anyway old gile often appear in the web for sale by on-line auctions.