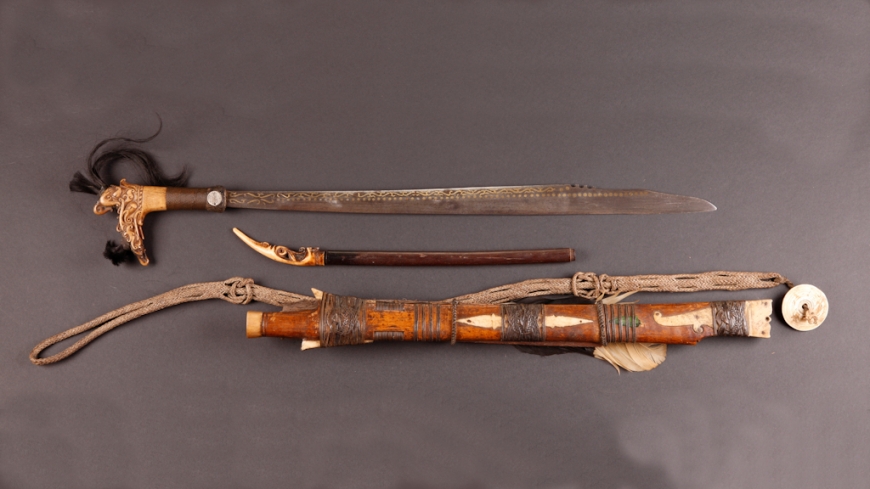 The Mandau or Parang Ihlang is a short sword or machete less than a meter long.

It is the typical weapon of the Dayaks, the headhunters of the Borneo. The blade has a narrow single-cutting edge with a shorter opposite side often decorated and a slanting tip.
The handle, made in wood or horn, is generally engraved and often embellished with feathers, animal’s hair and sometimes colored wire or rattan.

The mandau is one of the most romanticized, albeit macabre, weapons of Borneo.
In Italy these weapons were made popular and famous by the novelist Emilio Salgari (1862-1911) who made the mandau the weapon of choice together with the kriss, used by the pirates of Sandokan.

The Dayaks are a population of the insular Asia located into the forests of the Borneo island (Indonesia). They are divided in about 200 ethnic groups or tribes, each one having its own dialet, customs and traditions.
The main tribes are the Iban (see Dayak), Taman, Klemantan, Panan, Kenyah, Kenyan and Murut. 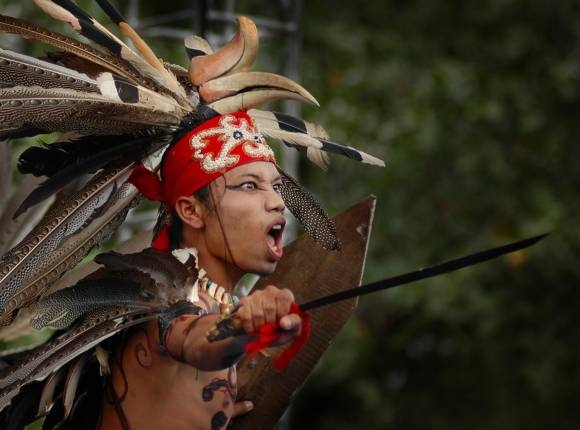 The Dayaks are farmers also engaged in poultry and piggery. They hunt and fish as well. Due to their anthropological characters and culture they are considered early indonesians. They work the metals, in particular copper, with which they produce remarkable handycrafts. Typical Dayak weapons are the mandau, the blowgun and the club with stone head. 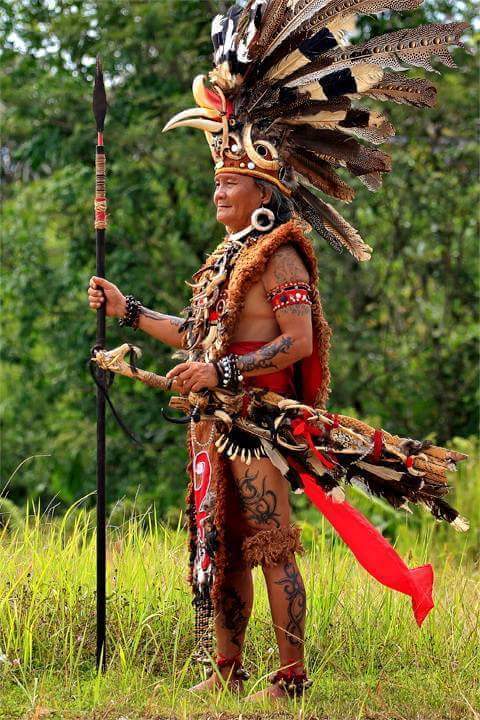 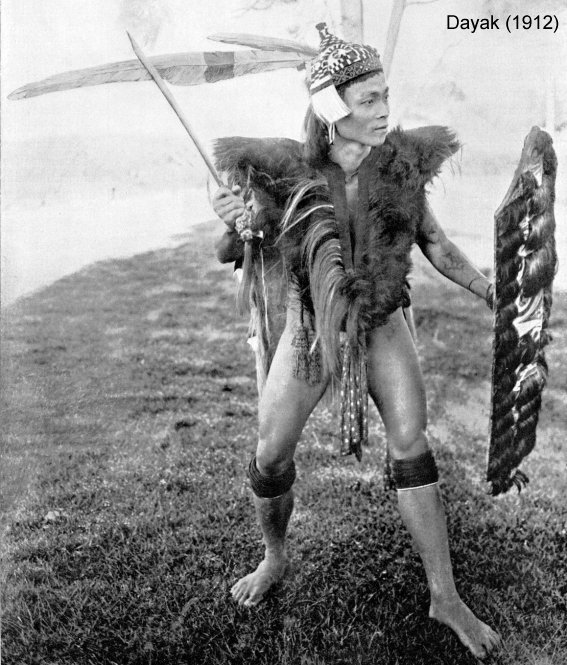 Dayaks live into collective rectangular and very long houses, built on platforms elevated above bamboo sticks and wooden pile. The men are divided in age classes, where the passage from one to the next involves gory initiatory rites (circumcision, mutilations, etc.). The family has a patriarchal structure and they follow the rules of the ambilian marriage (the husband becomes part of the wife’s clan).

In the past animists and head-hunters, nowadays Dayak are mostly Christians due to the massive action of the missionaries in the last century. Despite almost all the tribes plead to be Christian, in many tribes people believe in the presence of evil or benevolent spirits and still preserve animist traditions and ceremonies. 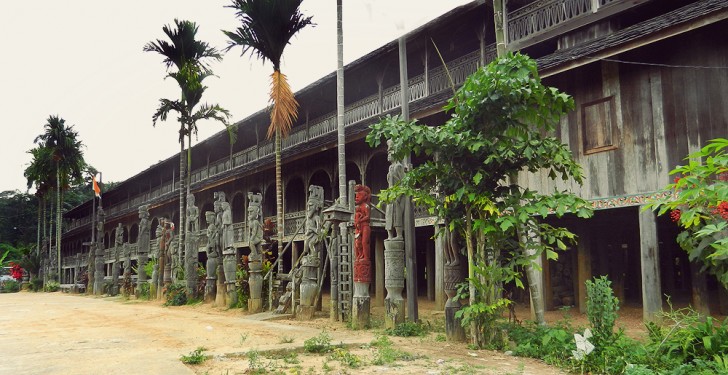 Long time ago the Dayak tribes were often fighting among themselves and coming back to the village with one or more severed heads guaranteed prestige and admiration to the warriors. Headhunting practice was not only linked to the war: Dayaks believed, and many of them still believe, that the skull is the container of the soul and the human essence. Bringing new heads to the village meant bringing life spirit to people and to the soil. It was customary to cut enemy’s heads before the harvest to make the soil fertile, or before a marriage to show courage and value of the future husband. 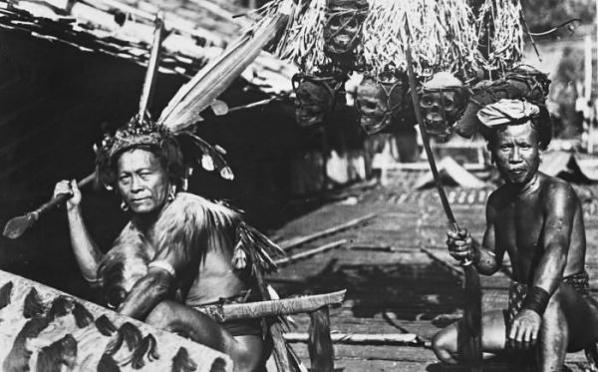 Killings and beheadings were shown by tatoos, at least among the Iban: a black ring arounf the thumb of the hand meant to have killed the chief of a village, the same ring on the index finger meant killing of a shaman, on the middle finger a warrior, on the fourth finger a woman and on the little finger a child.
After the mass conversion to the Christianity (partially also to the Islam) and the introduction of anti-headhunting laws by the colonial powers, such as practice seemed to be disappeared but on the occasion of conflicts and riots, Dayaks brush up the ancient customs and start cutting heads agan.
In 1940 the heads were those of the Japanese invaders and in the 1960 those of the Borneo’s Chinese citizens suspected to support the Communism in China. In both the cases Dayaks were encouraged by the major powers as the Allies in the 40 and the Indonesian government in the 60. 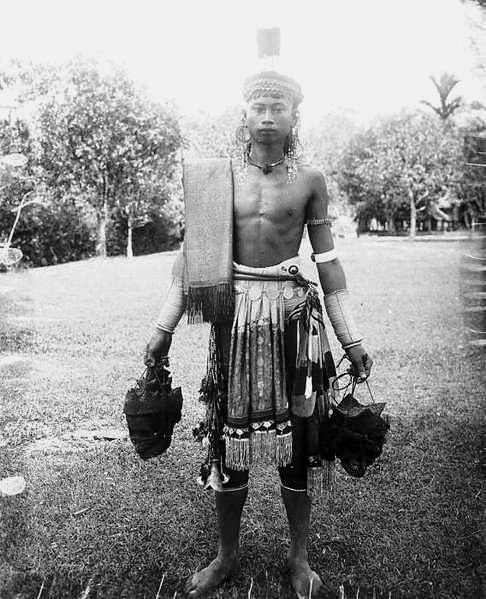 In 1998 and 2001 the Dayaks began a fierce etnic clash against the muslims migrated from the island of Madura to Borneo.

From an article of Corriere della Sera (Italian newspaper) on June 10, 1997:
Thousands Dayaks in T-shirt but with the face painted for battle as required by the ancient customs, and incited by their shamans, began to attach the madurese and sistematically have burned down their homes in the region north of Pontianak. The journalist of the Indipendent reports that “beheaded bodies of men, women and childs lie along the road from Pontianak to Pahauman with gashes in the chest that have a clear meaning: the hearts have been ripped from the bodies still warm and eaten in complex dark magic rituals.

From an article of Repubblica (Italian newspaper) on February 24, 2001:
Hundreds beheaded corpses float on the river, the houses of immigrant Madurese have been all burned, Willbald Pfeufferil, chatolic priest, said to Misna missionary agency. The 700 policemen mobilized by the authorities don’t succeed, and maybe not even try, to stop the raids of the Dayak that continue to set on fire, destroy and show the severed heads of their victims as trophies.

Probably, if we imagine these events, screaming and barefoot warriors in tribal dress with painted faces come to our mind. Partly this is true, but the situation of the tribal populations is different from that of our imagination. Infact it seems that the clashes in 1997 began after two Dayak boys have been stabbed at a pop festival, whereas in 2001 the spark was the theft of a motor scooter.
Things change, some customs and ancestral beliefs remain.

The mandau is associated to the dayak’s headhunting traditions although it is more commonly used as a machete in everyday life. The mandau is used by many people of Kalimantan and is widespread.

The mandau is believed to have supernatural power and it is passed as an heirloom from generation to generation. In addition to an important role in custom rituals, the mandau is also used as payment or as a richly symbolic gift, for example, at a wedding.

Mandau is the traditional weapon of the Dayak people of Borneo. It has several names as:

The mandau is single-edged, but not flat in section. Rather, it is slightly concave to ensure an effective cut. Cutting is its purpose, so the tip is of little importance and may even be slightly rounded. The blade is made of a softer iron, to prevent breakage, with a narrow strip of a harder iron wedged into a slot in the cutting edge for sharpness.

Mandau means "double knife" because it has 2 blades: the main sword and a small knife fitted in the back of the sheath. The small knife is caleld Langgei Puai that means whittling knife.

The headhunting necessitated being able to draw the sword quickly. For this purpose, the Mandau is fairly short, which also better serves the purpose of trailcutting in dense forest. It is holstered with the cutting edge facing upwards and at that side there is an upward protrusion on the handle, so it can be drawn very quickly with the side of the hand without having to reach over and grasp the handle first. The hand can then grasp the handle while it is being drawn. The combination of these three factors (short, cutting edge up and protrusion) makes for an extremely fast drawing-action. 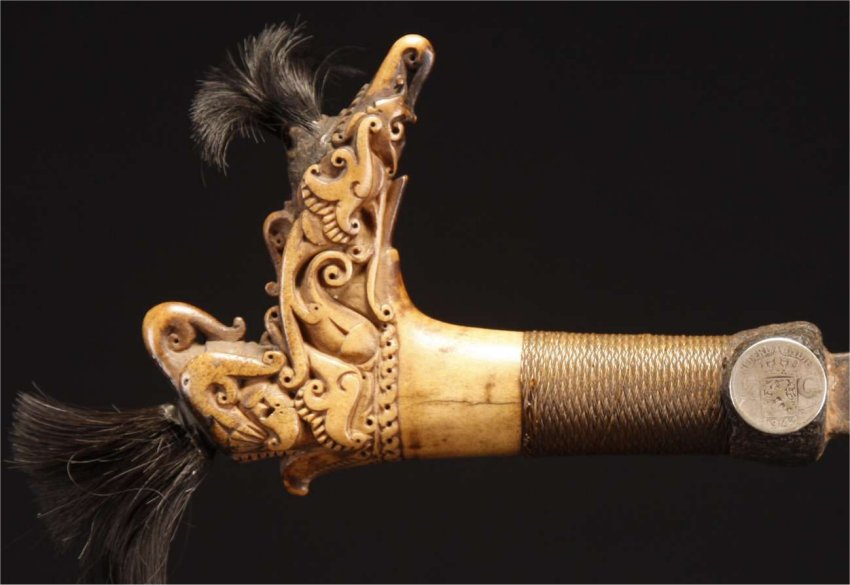 The mandau swords of all Dayak tribes typically conform to the same pattern: a blade narrow at the grip, widening gradually towards the point. There is a slight difference in curvature between the blades of different tribes.

These are different from the Parang Ihlang: they have a curved blade and a hook (krowit) on the blade near the hilt, which serves as a finger guard. They can be divided in four different types: 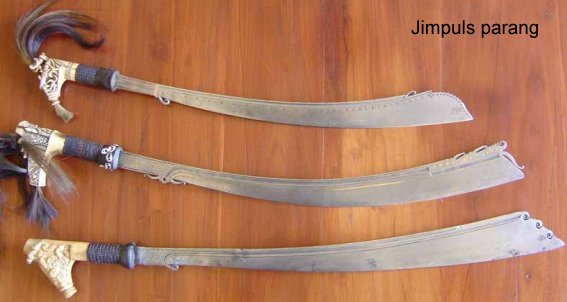 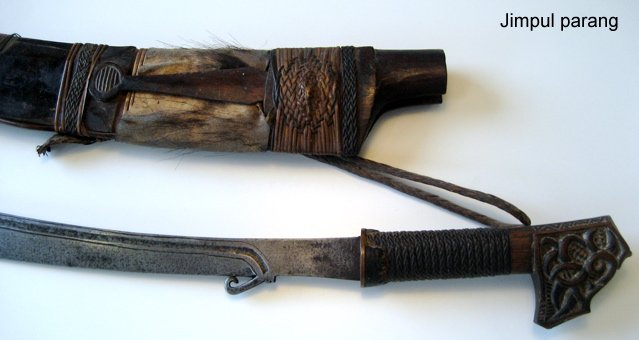 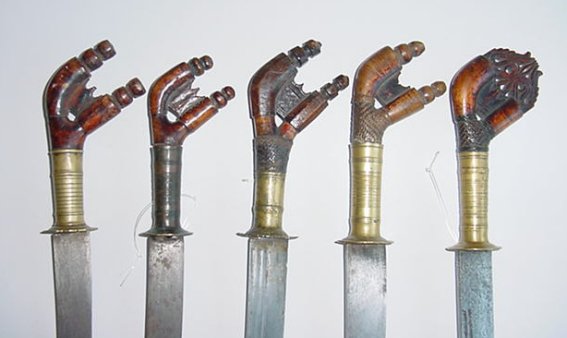 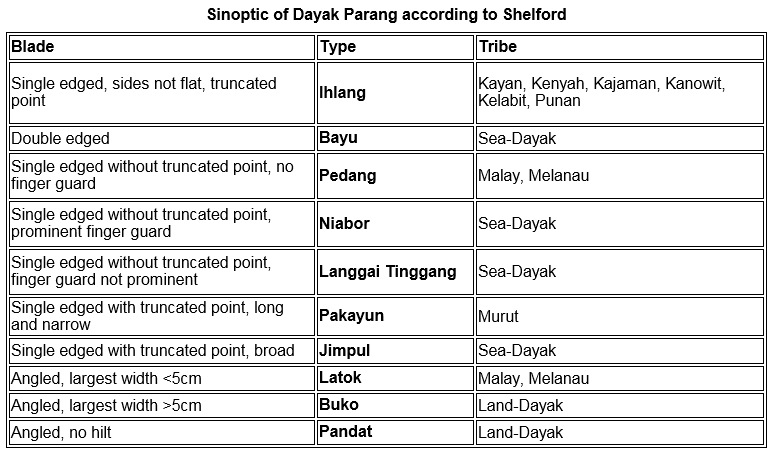 "A Glossary of the construction, decoration and use of arms and armor" George Cameron Stone
Various websites: indoneo, viaggiarelibera, old.blades.free.fr/swords/dayak/parang_dayak