The BF2 V is the first folding boat knife developed by Extrema Ratio, and its launch took place on the Italian training ship, Amerigo Vespucci.

The Amerigo Vespucci, one of the most beautiful sailing ships in the world, was designed in 1930 and launched the following year in Castellammare di Stabia, together with her sister, the Cristoforo Colombo (which was ceded to the Soviet Union after the Second World War). It was on this historic ship of the Italian Navy the BF2 V was presented; a compact folding knife belonging to Extrema Ratio's Basic Folders (BF) line.

The knife has a saber grind and a drop point / tanto blade, in which the american tanto tip is joined to the blade spine with a slight curvature. The steel used is the N690 with stone washed finish, hardened to 58 HRC. The compact size of the blade (65 mm long and 3 mm thick) makes the BF2 V a handy tool especially during particular situations that occur on board a boat. As has already been found in other products that use the N690 steel, corrosion resistance in brackish water is rather minimal, so careful maintenance of the blade is strongly recommended after each use. 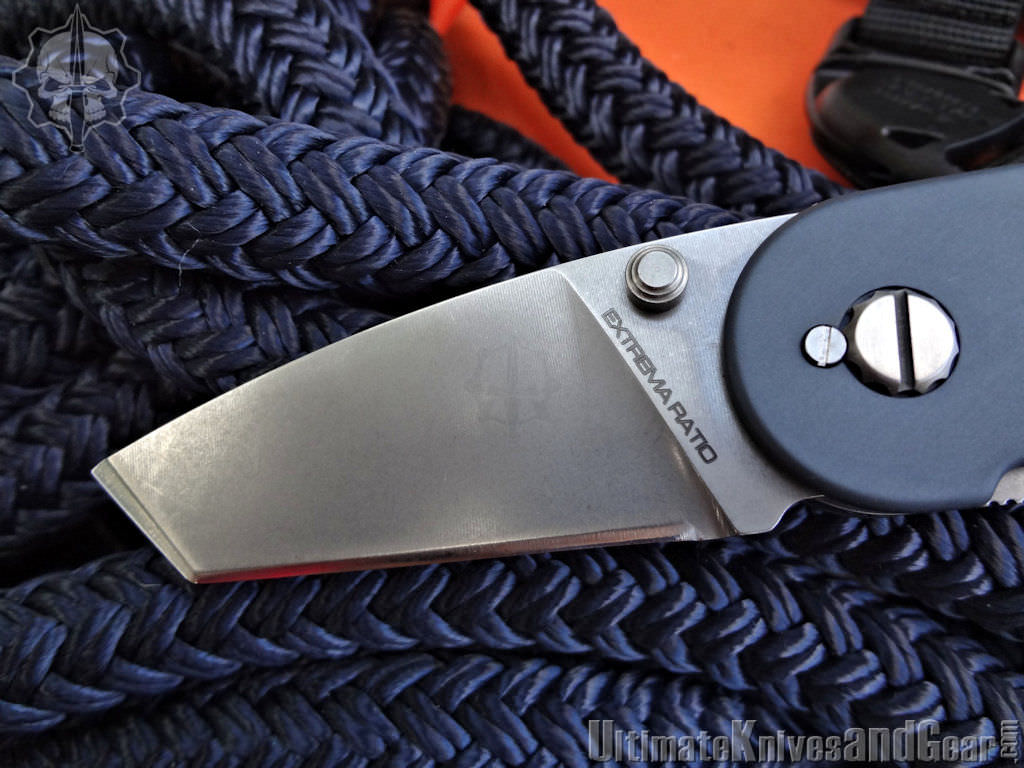 The blade, equipped with ambidextrous thumb-stud, rotates around a pivot adjustable via slot screwdriver and provided with a 12 position small stop-screw to keep the pivot in the desired setting; to reduce friction of the blade traditional Teflon washers have been used.

The liner-lock mechanism is also equipped with an additional safety system consisting of a steel part which goes into position under the liner spring, so as to prevent accidental unlocking of the blade. The safety mechanism is operated by moving up the red slider, and discovering the word "LOCK" engraved on the bottom of the knife scale.
The safety system, being located in place of the pivot on the knife grip at the liner-lock side, may not be easily accessible for right-handers without rotating the knife and being able to use the thumb.
All couplings of knife parts are very well made and with the blade opened, held in position thanks to the stop-pin, there is no play. 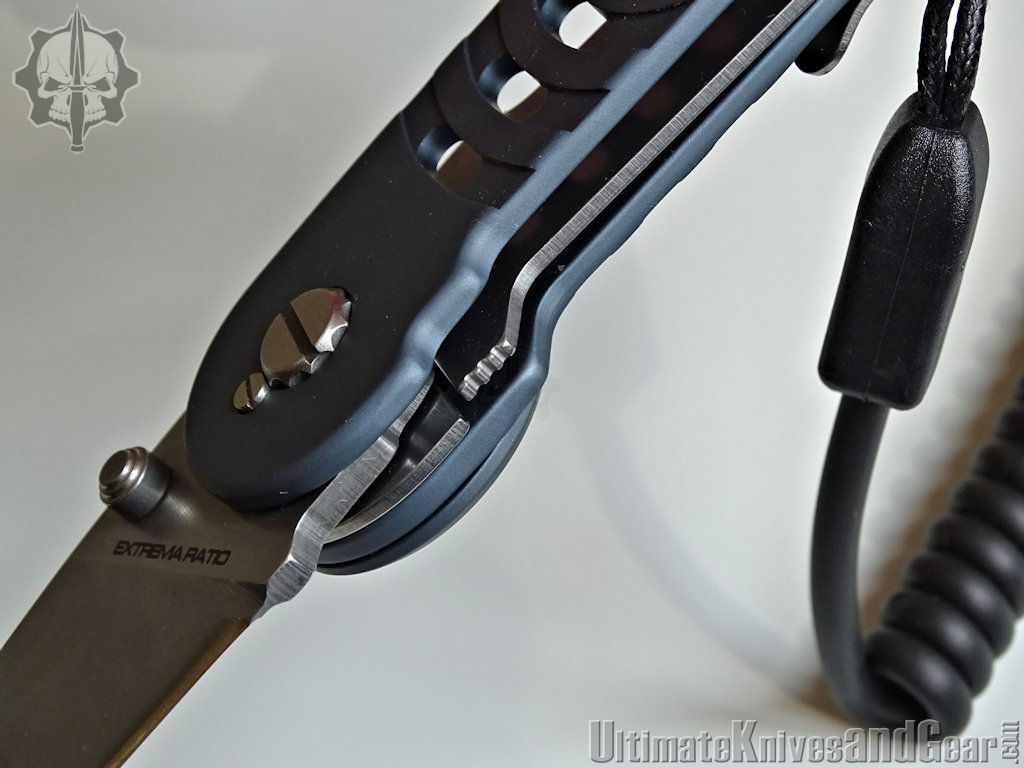 The handle is formed by two anodized anticorodal aluminum scales, on which have been practiced a series of milling that, in addition to further lightening the knife, makes the operation of rinsing and cleaning simple and straightforward. In addition to these holes, the scales are equipped with concentric circle patterns (obtained by milling) previously used on other products of the Basic Folders line. 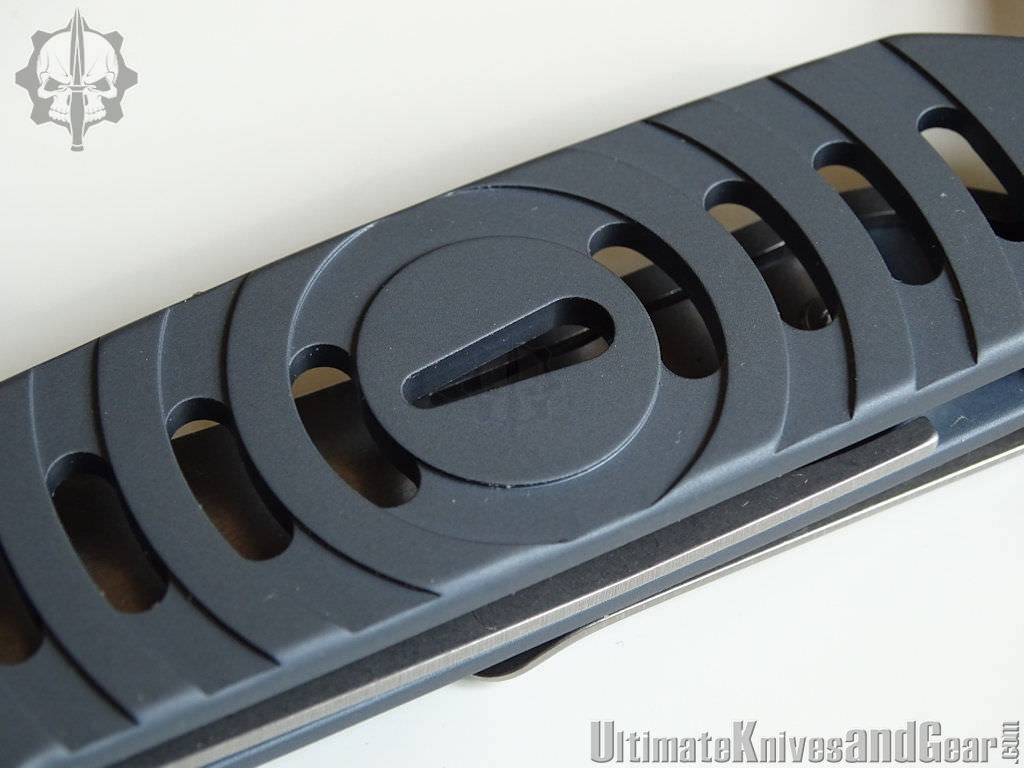 In the central part of the scales there is also a slot which can be used as a screw-pin shackle wrench of small dimensions (the most annoying to be clamped with fingers!). It should be noted, however, that there is only one steel liner to reinforce one of the aluminum scales (and therefore the slot). You will have to reckon with the inevitable damage to the aluminum in case is actually used on very strong steel components, such as shackle wrenches.

On a boat knife the marlin spike cannot be excluded; always useful when you have to deal with halyards or mooring ropes. 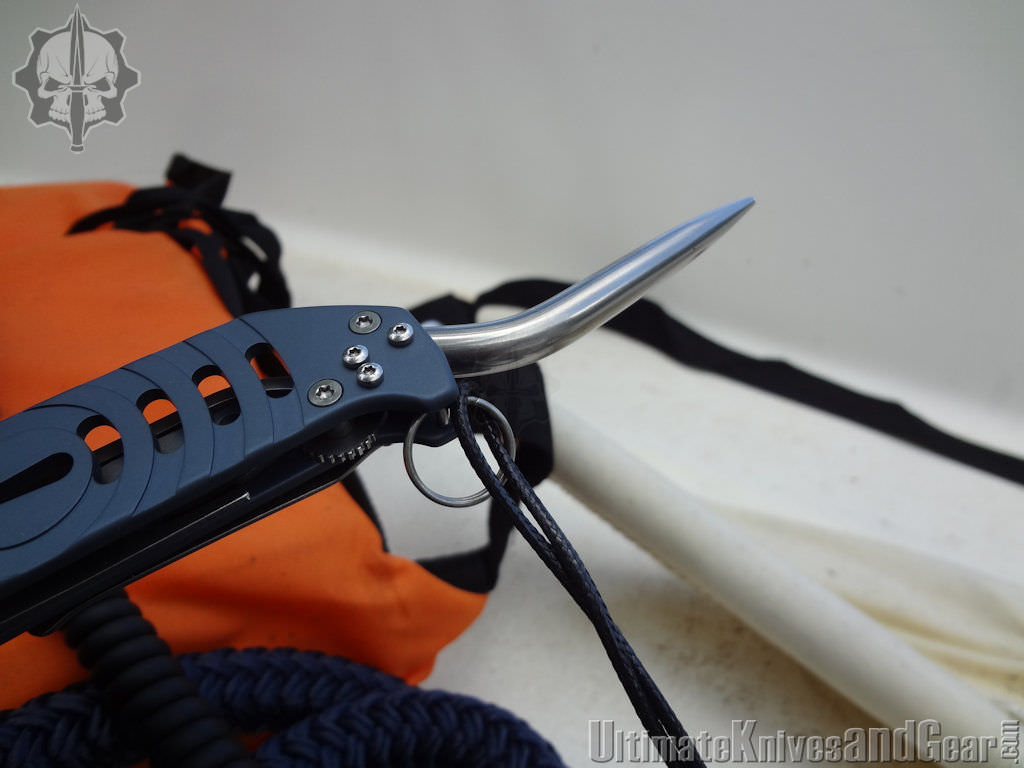 This tool, placed in a recess formed on the scale, is made of stainless steel and has a length of 7 cm, and is equipped with a steel locking mechanism that goes to act on the spring placed at the base of the marlin spike, and keeps it fixed in two positions: at 90 ° relative to the handle or completely extended. 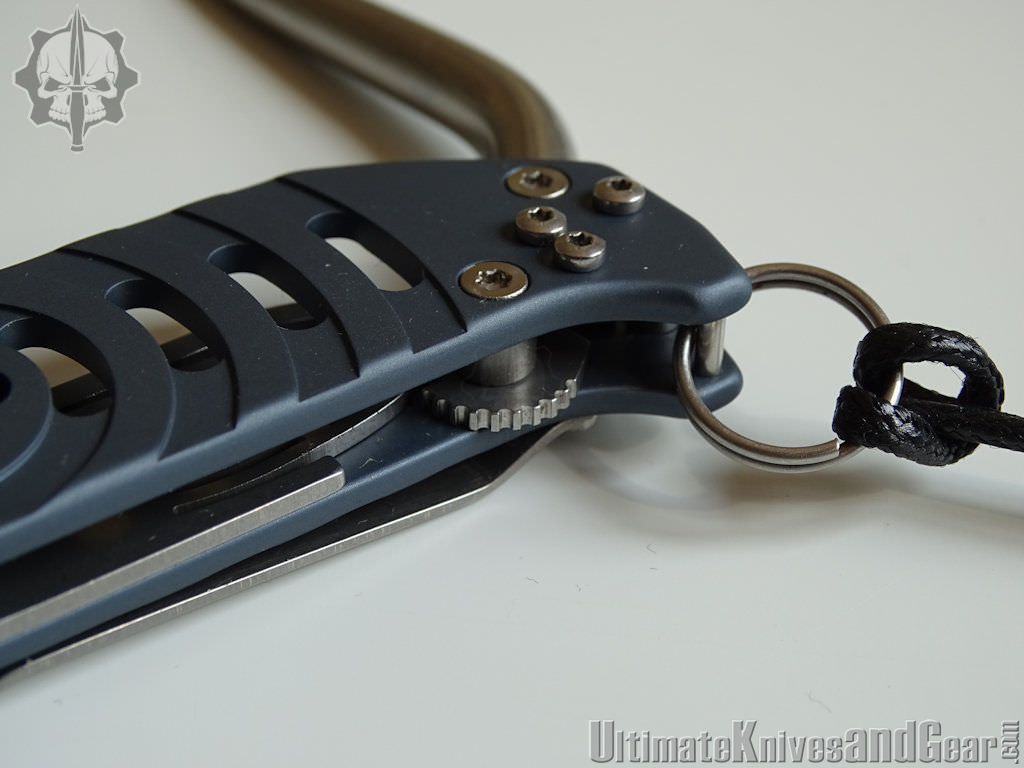 The knife features a simple clip, in tip-up ambidextrous configuration and with stone-washed finish that reproduces that of the other steel components. The other holes for changing clip configuration are closed with the spare screws.

The BF2 V is provided with spiral plastic lanyard, with a total length of 62 cm at rest (about 135 cm in maximum extension) and constituted by a belt loop made of nylon with Velcro, a rigid plastic joint equipped with quick button release and, at the other extreme, a thinner cord to be joined to the ring placed on the bottom of the knife handle. 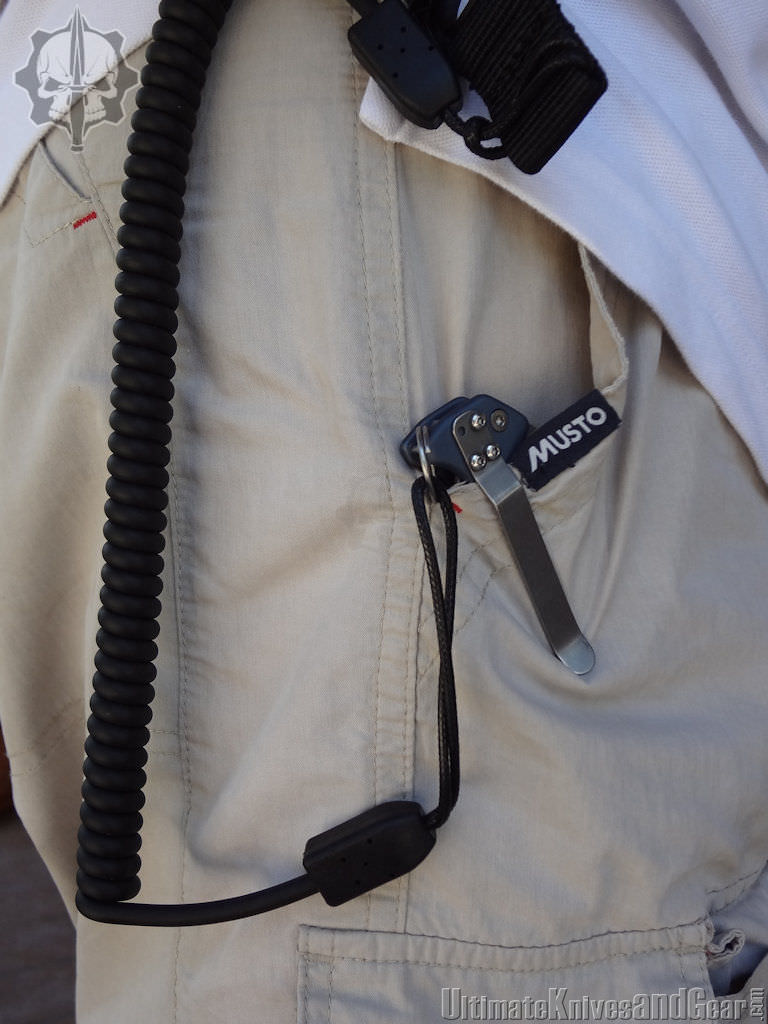 Clearly this kind of system is very useful to avoid losing the knife but, if on the one hand the length of the elastic lanyard is such as to allow a wide freedom of movement, on the other side it constitutes a possible handhold point - which generally is not desirable when operating a boat. Furthermore one needs to take care in case the knife falls from the hand during use, because the lanyard is long enough that the blade could reach the feet.
All of these aspects have to be taken into account and are an inevitable compromise to avoid the risk of losing your knife into the sea. 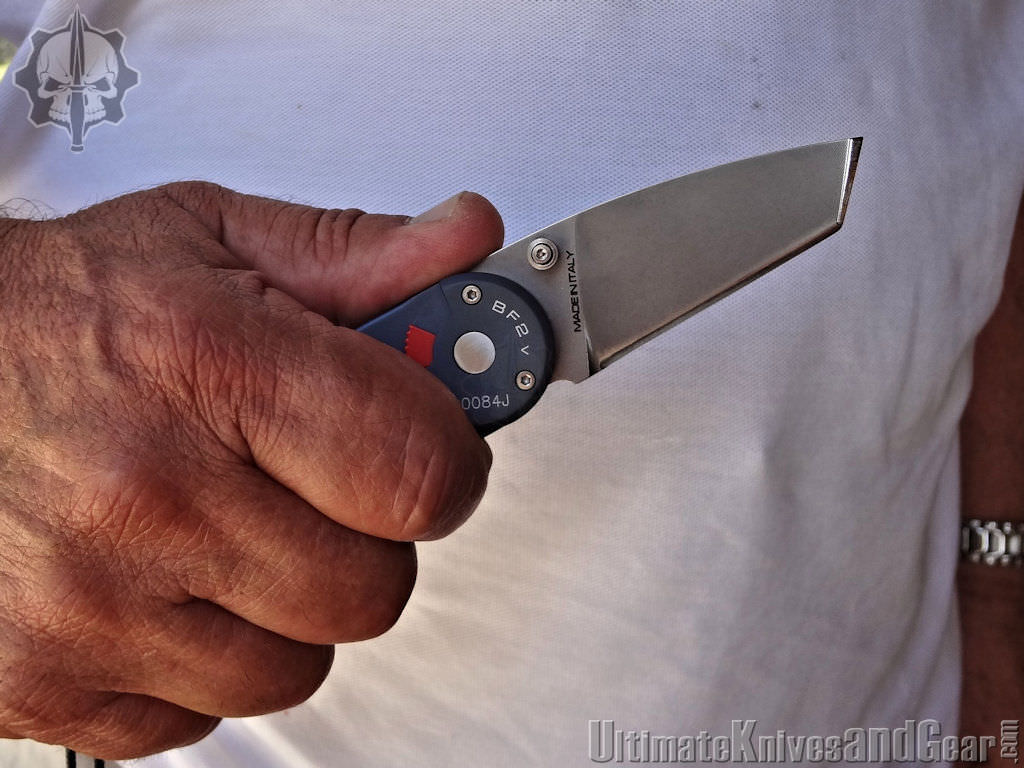 We made several qualitative cutting tests on mooring ropes of different types (twisted 3-strand polyester rope with diameter 16 mm, and a regular polyester rope of a diameter of 10 mm), and on a multipurpose polypropylene lanyard of 5 mm in diameter. The outcome of the tests was positive and the sharpening of the product proved to be optimal, producing clean cuts with ease and without the slightest effort. 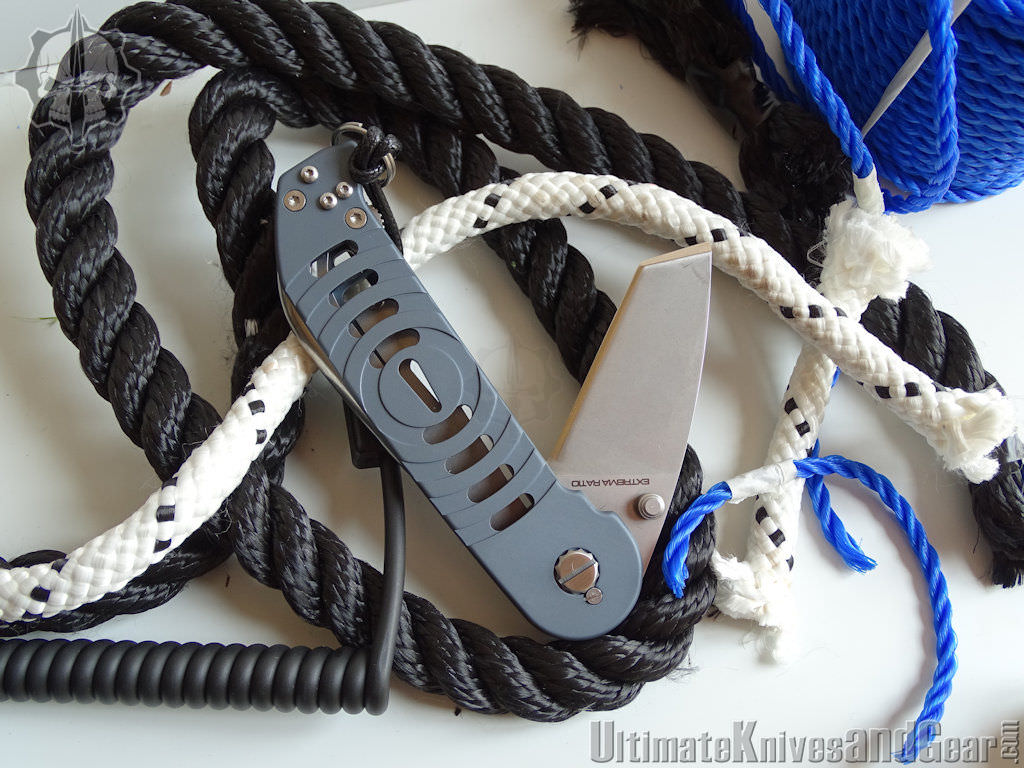 Overall, the BF2V is a good multipurpose knife, safe, well built and reliable. Generally specific knives for onboard life are equipped with a sheep-foot tip to prevent accidental falls that could damage the surface of the boat, or to limit the chance of injury (often maneuvers, especially on sailboats are made so quickly and in confined spaces) and therefore probably the tanto tip of the BF2 V is not the most suitable one for this kind of product but, in any case, the technical characteristics of the BF2 V make it potentially suitable for different uses and contexts, not necessarily related to activities on the boats, an attitude that will appeal to lovers of the prestigious Italian brand, who can count on a tool that will accompany them constantly, at sea and ashore.

This article has been published on the Magazine "Armi&Balistica" n.42