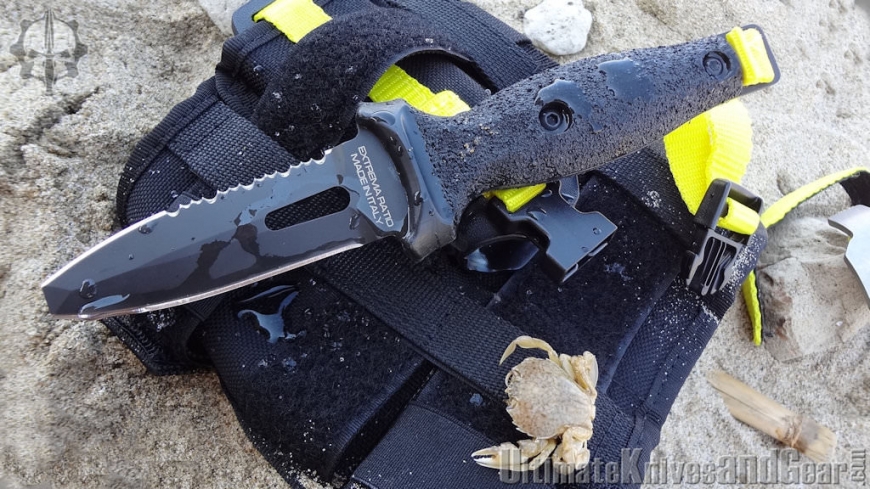 The Diving COmpatc Knife (DICOK), presentend in 2013, is the first sub compact knife made by Extrema Ratio, which completes the range of products produced by the famous Italian Company, Extrema Ratio, specializing in the development and production of professional military and civilian knives.

The Company from Prato, supplier of the Italian Armed Forces, has a strong identity that is reflected above all in a major marketing strategy that has allowed them to emerge on the international market, becaming also a supplier of the French Armed Forces. Extrema Ratio products are always easily identifiable at the first glance, distinguishing themselves from competition mainly thanks to their distinctive designs.
The first ER product dedicated to divers was the famous ULTRAMARINE, designed and built for military use for underwater and amphibious units. The DICOK, a more compact version, seems to be more geared towards civilian scuba divers.

In general, the use of diving knife is mostly aimed to an emergency context. Indeed it happens with a certain frequency that while diving in particularly complex and hostile environments, such as caves or wrecks, we can encounter fishing lines, fishnets, lanyards, ropes, etc. and the only way to save us in case of entrapment, is to have available an efficiently and easily accessible cutting tool.
In fact, in all these contexts where high stress and reaction times to solve the problem should always be very small, the diver must be able to intervene decisively and quickly.

The DICOK, designed and developed in collaboration with experts divers, has the typical compact size of a backup knife (with a total length of 196 mm), which help to handle and transport it in aquatic environments and in adverse conditions.

The blade, 76 mm long and 4 mm thick, has a double edge with a partial serration on one of the two sides that extends for about 40 mm.
The full tang knife is made of Bohler N690 steel (EN / DIN X105CrCoMo18-2) hardened to 58 HRc, finished with a burnished surface compliant with MIL-C-13924, which confers a better resistance to corrosion. Furthermore it has been practiced on the blade a slot with the function of screw-pin shackle wrench. 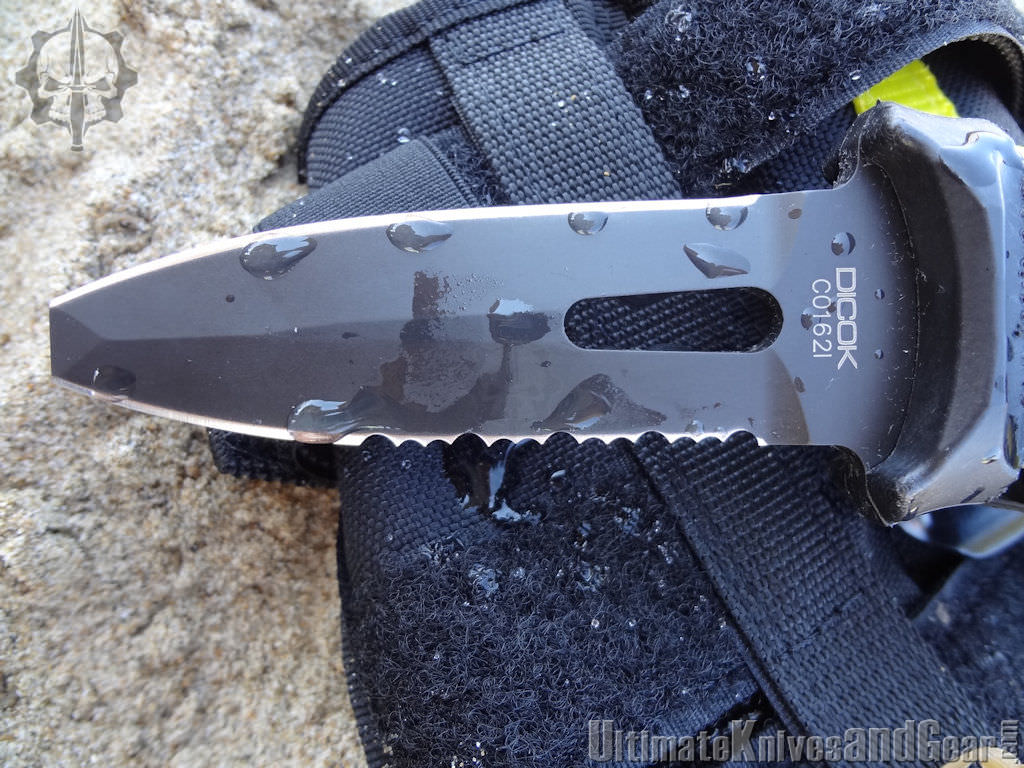 The knife has a chisel tip, in order to carry out lever works, but also for increased security both during diving and onboard uses (an accidental knife fall would avoid to damage the boat or raft).

The handle is formed by two scales made in fiberglass renforced nylon, easily removable through Allen screws, thus allowing to perform maintenance in a practical and rapid way. The anti-slip texture allows an absolutely flawless grip on the handle, both with the gloves and bare hands. The grip is firm on the knife and during use in diving you don't have the sensation that knife can escape from hands. 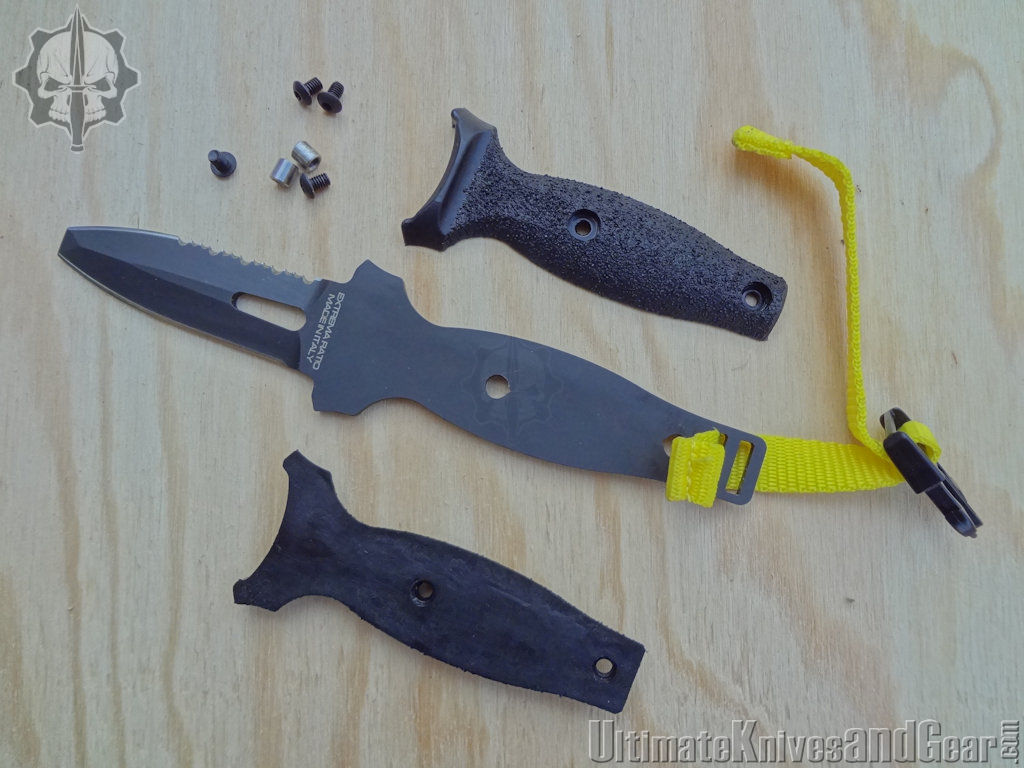 The sheath is made of nylon and polyester and inside it houses a kydex insert in which the knife is inserted through a retention system on the guard. In addition to this system, a bright yellow safety buckle has been added, that connect the knife to the sheath through a fastex closure. Given that under stress conditions the release operation of this system can be problematic, fastex closure can be bypassed thanks to an anti-panic closure made by a snap fastener connecting the end of the buckle to the sheath. On the inner side of the nylon sheath, the one that comes into contact with the wetsuit, there is a non-slip rubber like membrane. 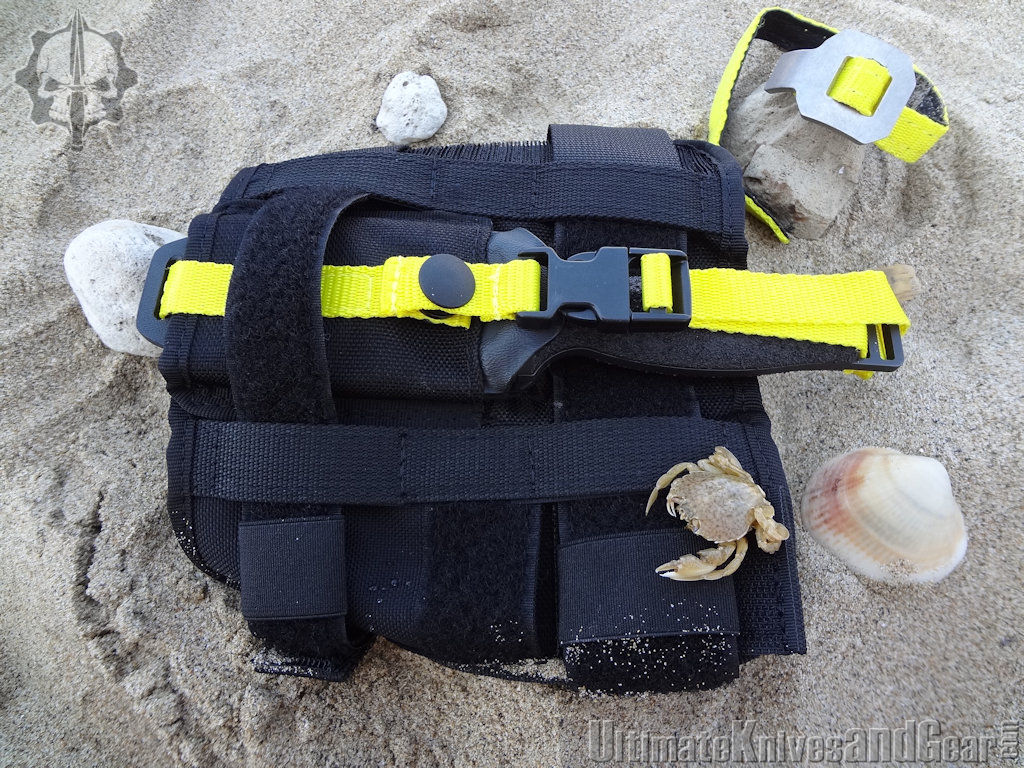 Furthermore, the sheath is equipped with a small pocket in which there is the key to unlock the first stage valve.
The sheath is designed in such a way to allow it to be worn in various configurations, including fixing it to equipment as the BCD (Buoyancy Control Device) or to the belt, through the Extrema Ratio's belt-lock system  (sold separately) or the attachment to calf or forearm of diver.

We are used to seeing, in various films, divers who wear knives on their calf, but this configuration is actually less widely used and obsolete, as well as present several disadvantages such as poor hydrodynamics, the difficulty of reaching the knife, the risk of get hurt when put it into the sheath, and the danger to get caught up because of the knife itself. Despite this consideration, the sheath is designed also for this positioning, made it possible thanks to strong elastics that ensure the adaptation of their length thanks to Velcro closure.
Indeed experienced divers place the knife on BCD corrugated hose or on the other shoulder, location that is easily accessible with both hands. Thanks to ER's knife and sheath design the risk of damaging the corrugated hose is minimized, but probably the best placement is on the shoulder strap of the BCD.

Another solution, simple and usable, is the positioning of the sheath on BDC belt on front side (if this is possible), where the knife is quickly and easily accessible in most circumstances. Finally, the last solution, that is the one generally adopted by most divers, is the positioning on forearm, where the knife is reached in an intuitive way, but with only one hand. It must also consider that this location preclude other instrumentations which are generally fastened to the wrist. In the latter case the DICOK's sheath appears to be, in my opinion, a bit bulky and not very practical.

Before entrust the knife to a dear friend, Gianni Melis, experienced certified diver of the Italian Navy ARA 60 meters and ARO 12 meters, were made some qualitative cutting test on a polyester boat rope of 16 mm diameter. The cut was not particularly easy to do, and it needs a time of about 30'', due to the factory sharpening that was not completely impeccable.

Then the knife, after being lubricated as indication of manufacturer's instructions, has been tested during a boat trip on Lazio's coast to the south of Rome (Italy).

Knowing the N690 steel properties, I had some perplexity about its corrosion resistance in the marine environment. Generally average quality knives for divers are made of Bohler N680 steel (low carbon and high chromium), while the most prestigious brands use H1 steel (where nitrogen is used instead of carbon, avoiding oxidation problems), or French X15TN steel, and titanium (which however presents some problems with cutting edge retention).
Indeed, as I suspected, after only 4 hours to salt water exposition, the DICOK was covered with a layer of rust on the cutting edge and in parts where the surface coating had been scratched due to use.

Given that generally all carbon-containing steel knives are subject to surface oxidation and that the knife should always be maintained before and after use, rust has appeared too soon confirming the suspicion that the N690 is not the right steel for this type of environment. 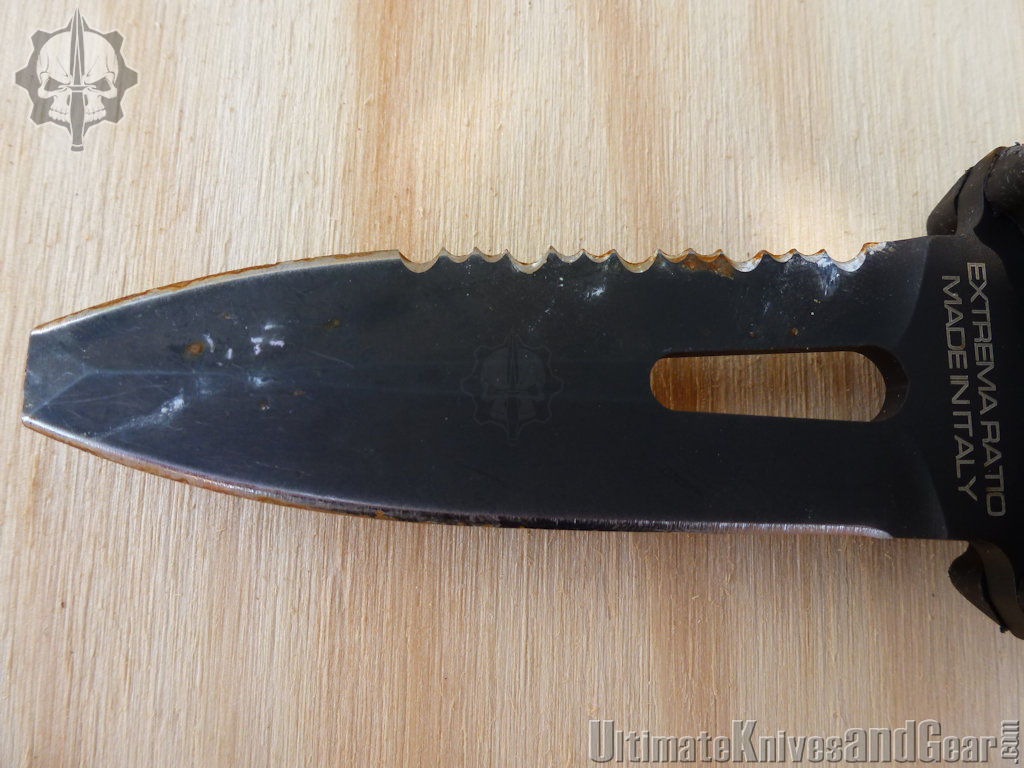 Anyway, it was enough to clean the blade with a rag soaked in lubricant, to remove oxidation, since it was a thin passivation layer.
There is to say, however, that the N690 steel, unlike the steels generally used for manufacturing of cheaper diving knives,  allowing to use the knife not only exclusively as a security tool, but also as a all-purpose backup. 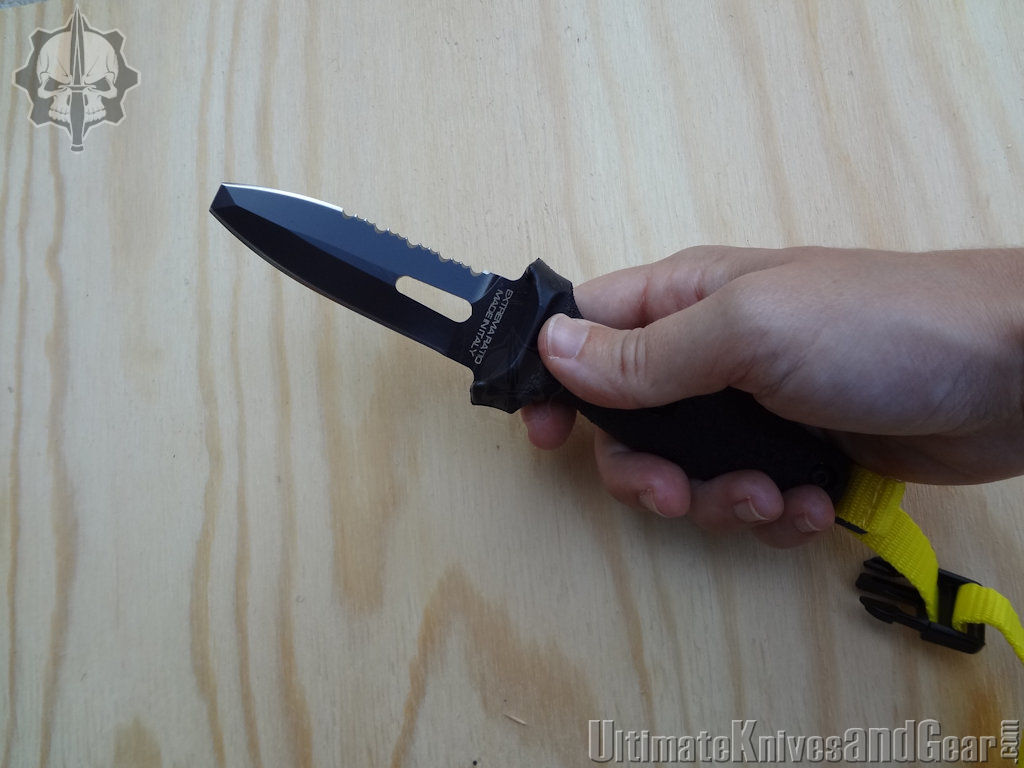 During our test, in fact, the knife was also used to draw out octopuses among the rocks (sometimes digging and impacting the blade against the rocks), to break sea snails shells (in this case the blade has inevitably stabbed the rocks). It's best to avoid to make this activities with other softer steels, because the cutting edge would be ruined in a very short time. 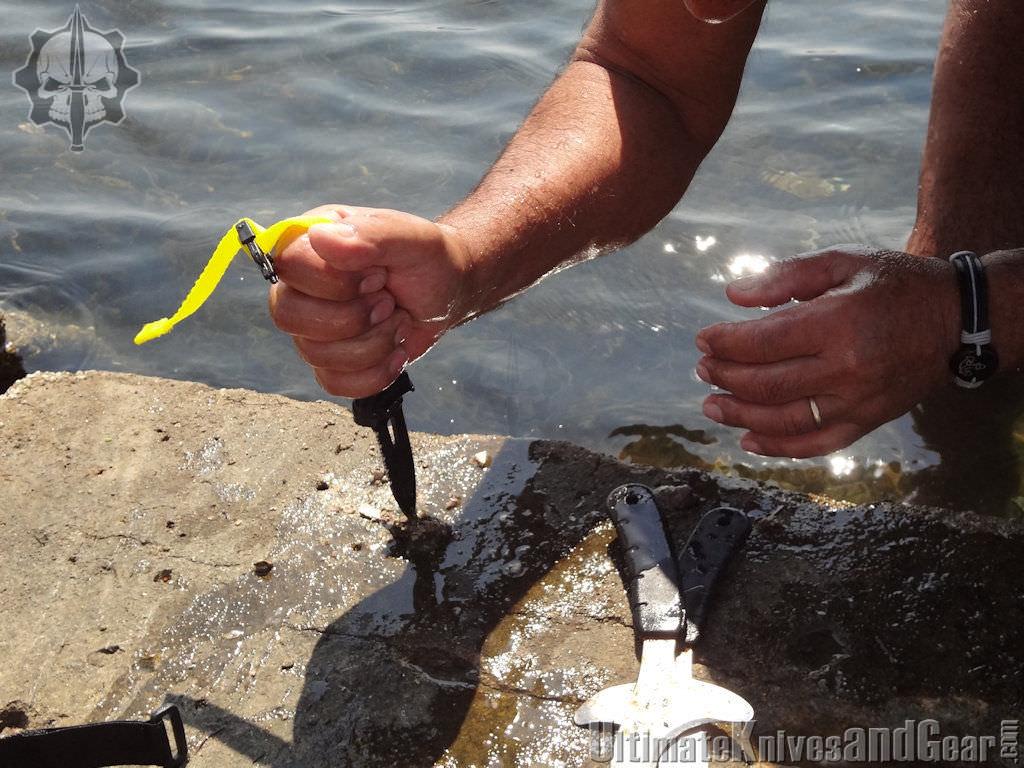 Therefore, as always when we talk about knives, the steel properties makes knife more suitable for certain activities and less to others. The user have to choose the knife that best meets his needs.

The retail price of the DICOK is of about 175 euro on Italian online stores. This price places it on the high-end market segment compared to competing products that are found in specialty stores. 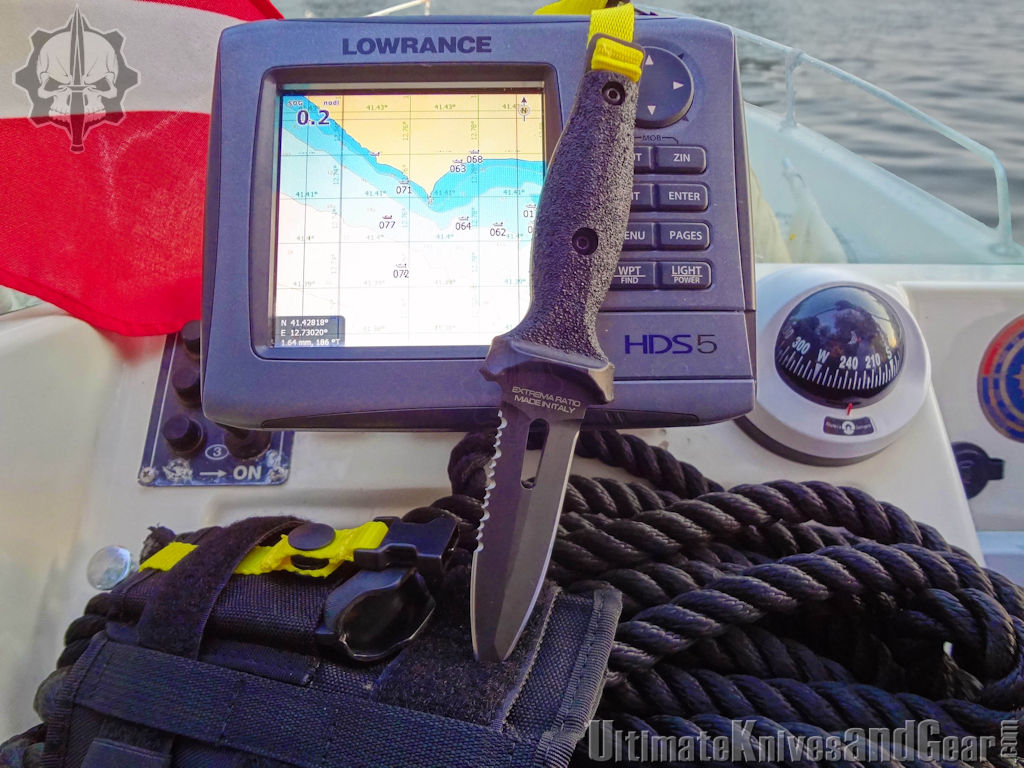 In conclusion, the evaluation of a diving knife purely depends on context and the kind of activities that diver wants to accomplish, which can range from sea cave diving to fishing (in a more or less professional way). The cutting ability, a good handle grip and the positioning onto the body, are essential for divers safety. And if you ask more to your instrument, using it also for heavy-duty tasks, then you will have to accept the compromise with less corrosion resistance, which will require assiduous knife maintenance. The DICOK fits in this category.

This article has been published on the magazine "Armi & Balistica" n. 21 (October 2013)