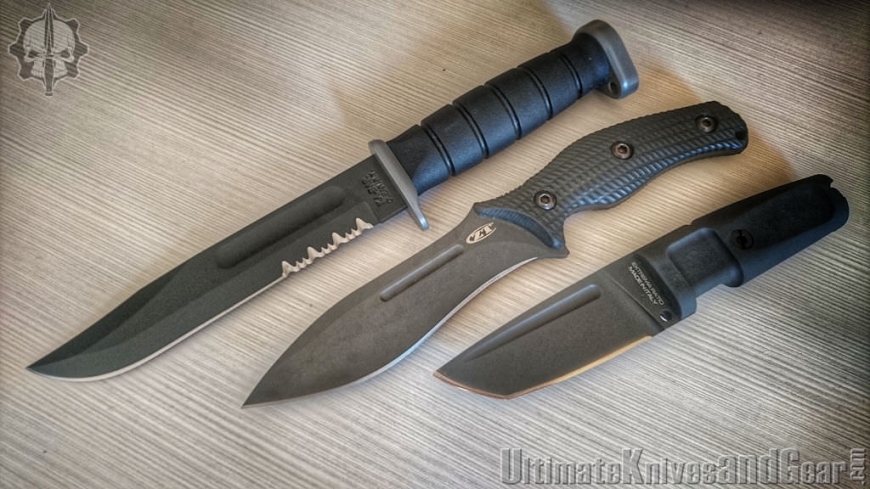 Even today someone calls "blood-groove" the groove sometimes present on blades. We will try to analyze its real function, providing the most common interpretations.

The first interpretation, and even the most erroneous, is the one that associates the "blood-groove" with the function of "draining the blood" along the blade, to avoid getting dirty hands and losing grip on the knife.

According to another theory, the blood-groove is made on blades to facilitate the release of the knife from person or animal body. In this context, it is said that the muscles contraction around the blade create a kind of vacuum effect, that makes difficult the blade extraction. The blood-groove presence would act in order to break this adherence state, spilling blood, and allowing a less difficult blade extraction.

There is no evidence that this thing really occurred; many experts, including surgeons, reports that there is no difference in the difficulty of blade extraction from a contracted muscle, both with or without blood-groove.

Obviously, this theory caused a stir in the common sense, especially in the masters of martial arts who live in sensationalism. The experts however, say that it is totally false: if the knife can penetrates the muscle, cutting a path along it, it can also come out easily, with or without blood-groove on blade. It may instead happen that the knife will break (especially the tip) between the bones, but this is independent on the blood-grove presence.

Therefore in the following discussion we will replace the word "blood-groove" with the more correct term "fuller".

According to someone, the fuller is purely decorative. This interpretation has some truth, although a fuller has a specific function, on a short knife the effect might be so small as to be insignificant, thus assuming a purely aesthetic connotation.
It is generally believed that the fuller has a purely decorative role in the blades with length under 40 cm; the fuller plays an increasingly important role as the length of blades gets bigger.

So what is the fuller function?

The application of grooves (fuller) to the knives probably derives from their application on swords blades.
The fuller had two main functions: lighten and stiffen the blade.

While the first function is easily understood, since remove steel means reducing the weight (in forging using less material extending more the blade, working in removal instead you remove the steel present), the second function is a bit more complex.

In an unfullered double-edged sword, there is only one center spine, with a flattened diamond cross section (like common daggers).

This cross section would be rather "flexible" on a blade that is close to three feet long. The presence of the fuller, instead, introduces a second spine on the blade, stiffen it considerably; obviously the perception of the difference between a blade with fuller or without is significant in a certain length blades.

The fullers on knives act in the same way, although in the short blades the difference is not easily perceptible. From the engineering point of view, however, a blade with a high quality steel, hardened and tempered in an appropriate manner, on which has been practiced a fuller can be from 25% to 30% lighter compared to the same blade without fuller; this without sacrificing the blade strength or integrity.