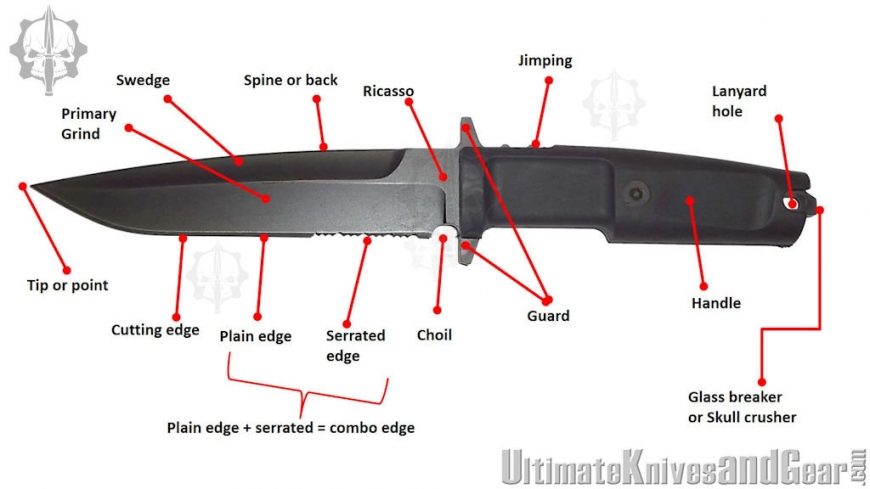 After analyzing the most popular blade profiles and grinds, we will now review all the other parts that constitute a fixed blade knife, then dwell on the various types of tang.

The tip or point of the blade, together with the profile of the blade itself, determines the use, style and construction of the shape of the whole knife.

The back, or spine, is the thickest and most durable part that gives support to the whole blade. The wider and thicker the back, then the sturdier the blade will be. The spine can be linear or curved, depending on the type of knife.

The ricasso is the area of the blade that is not ground (where it has the maximum thickness) from which the knife tang protrudes (defined later). It is placed before the guard (if present) or between the blade and the handle. This term was used in swords to indicate the area retained by the first three fingers of the hand, but was then utilised for the knives.

The choil term is used to indicate the small notch after the heel, which can also be bigger and shaped for positioning the index finger to favour the advanced grip (finger-choil). As we have learned in the previous article, the part that truly distinguishes a knife is the grinding. Grinds are the transversal and uniform tapering of the blade which, at the meeting of its planes, forms the cutting edge.

The cutting edge can be plain, serrated or combo. It may also be present at the end of the blade's spine, generally towards the tip, a swedge, swage or false edge. The purpose of the swedge is to reduce the section of the tip area to improve its penetration capacity without sacrificing  the thickness too much (to avoid fragility).

On the blade there may be fullers whose function is to lighten the blade without sacrificing its resistance. Historically they were in large blades, such as swords, but in recent times they are also used in small blades especially for aesthetic reasons.

The guard or quillon is the fundamental element that protects your fingers from slipping to the blade or, in combat knifes, from the opponent's cutting blows.
It is generally transverse to the handle and the blade, and it can be made in the most diverse shapes, from the most essential to the most exaggerated. In the simplest form, the knife can be used ambidextrously.
The guard can be simply extended by the blade's spine, with a thumb ramp or thumb rise, or it can be an additional part, as is usual with hidden tang knives.

Some knives are made with a ring in which to position the index finger (forefinger ring) to have a firm grip on the knife. This configuration, while ideally conceived for combat knives, has many disadvantages as it traps the hand, prevents reverse grip, and sometimes keeps the finger inserted in the ring too long. The handle can be made in a variety of materials and shapes. For example, it can be made of scales rivetted or screwed, or made from injection moulding of synthetic materials. There may be finger grooves, which generally improve the grip on the knife or they could simply have a straight shape.

The handle can be framed by bolsters, with the function of strengthening the critical area of the knife, that is the junction between the blade and the handle where mechanical effort is concentrated, but also as an aesthetic factor.

In the terminal part of the handle there is often a lanyard hole; the lanyard is a piece of cord generally used in large knives as a safety measure (placing it around the wrist) but also as a fashionable item in folding knives to help to extract the tool from pocket.

At the bottom of the handle there may also be a glass breaker (rear hook or persuader), a protrusion used in tactical knives to "persuade" enemies or break glasses in an emergency. Another name used is skull crusher, a term that does not require any further explanation.

The tang, the extension of a blade portion inside the handle, constitutes the knife bone structure and can be made in various ways (integral, partial, short of Japanese type, narrow, and so on).

Below there are the most common types of tang.

The tang width is equal to that of the blade at the ricasso, and it extends to the end of the knife. It is the most durable configuration but also the one that gives more weight to the knife. The handle is made of scales riveted or fastened by screws, or it can be made by injection of polymeric materials (in this case the tang is embedded in the handle - Encapsulated tang).

Sometimes the tang thickness is reduced along its length until the end of the handle (tapered tang). There are also skeletonized tang knives, where some of the tang portions are removed to reduce the weight of the instrument. Usually this configuration is adopted in neck knives. The tang is exposed along the upper side and the end of the handle, but is covered by the handle itself in the part where the fingers are gripped, in order to decrease the weight of the knife and not draw back  the center of gravity too much. This construction also allows a better dampening of vibrations than a full tang, while still maintaining a high degree of sturdiness. Configuration in which the tang shrinks immediately after the ricasso, and is completely embedded in the handle. The hidden tang can extend for all the length, or be partial.

One way to create a hidden tang is to slide it through the handle so that it is level with the bolster (or the guard) and seal it with epoxy resin. Another way is to make the tang a little longer and use a buttcap to keep it in position by screwing it on the threaded tang.

In this latter category there is an extreme kind of tang called rat tail tang or stick tang, in which the tang has a much smaller width than the blade ricasso (sometimes they are also made by welding a steel cable). The tang is often attached to the handle with a bolt or buttcap.

Another type of hidden tang is the one where the width gradually decreases from the ricasso to the terminal part (Narrow tang).

In Partial Tang knives, essentially the tang does not extend throughout the length of the handle, and is fixed by rivets or resins (or both). According to the extension of the tang, it refers to half tang or three-quarter tang.

Even today we often encounter discussions about which are the most resistant knives between the full tang or the hidden one. Of course the typology affects both the knife performances (especially in terms of resistance to certain stresses) and on the final cost of the product.
Full tang knives have a full width in all critical areas of the knife, especially in the ricasso. The latter, in the hidden tang knives, is the point after which it begins to shrink the tang thickness and size until it reaches the end of the handle that is generally fixed by a buttcap. Hence, the hidden tang is not clearly comparable with the full tang, but however it could achieve good resistance levels if constructed according to the state of the art (depending on the construction mode, materials, etc.).