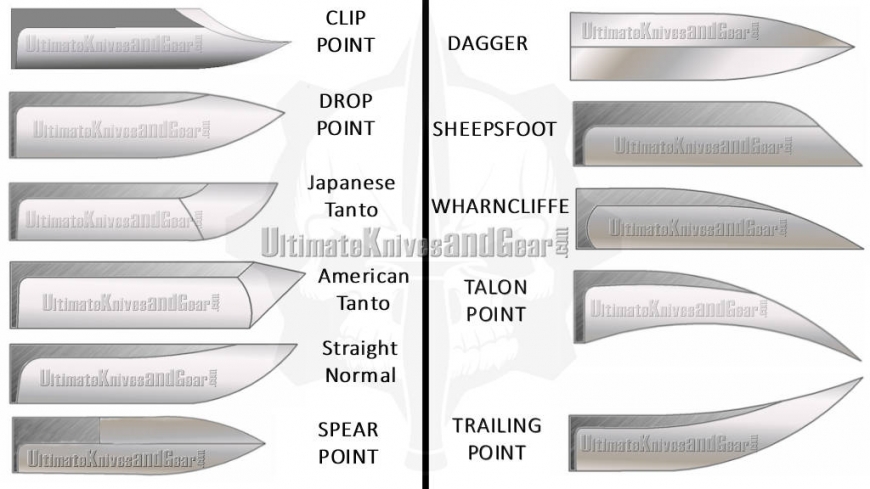 Below we provide an overview of the most popular types of blade profiles, keeping in mind that there are many variants, modifications and combinations of the various profiles, making it sometimes difficult to classify them uniquely.

The tip is an important part of the blade and determines the use, style and connotation of the shape of the whole knife. Below we will look at the main types of blade profiles:

In a clip point blades, the spine (or back) usually extends for about 2/3 of the length of the blade, then it converges to the tip (located under the spine axis), with a more or less pronounced clip that can be curved (with the tip up) or truncated with a straight line, may be sharpened or unsharpened.
Among the most famous clip-point knives we can mention the Bowie.

Also in the drop point blades, the spine extends approximately for about 2/3 of the blade length and then converges towards the tip, positioned lower than the spine, with a variable radius of curvature.

It is a strong point, one of the most popular together with the clip point, which gives an extremely versatile blade profile.
Drop point blades have numerous variations, such as the combination with the tanto blade (drop point tanto).

Straight blades are particularly popular in survival knives for their extreme strength. The tip is on the same axis as the blade spine, which in this configuration has a good overall strength.

In trailing point blades the tip is higher than the spine axis, with a curvature and blade thickness that varies depending on the use. In this type of profile the tip is usually particularly fragile.

Typical Japanese blade shape from which Americans made a squared version. The Americanized tanto is mostly used in tactical knives, rescue, but also combat, and in all applications that require greater tip strength and excellent penetration.

Commonly refers to a mostly symmetrical blade profile, which may or may not have a double edge. Looking at the bisector, a generally symmetrical profile can be observed on both sides of the blade along the center axis, sufficiently thick to support efforts during use.
This blade shape is mainly used in combat / tactical knives.

It is one of the most ancient blade shape, used by man since prehistoric times, characterized by symmetrical blade and double edge. This blade profile is mainly used in combat knives.

This type of blade is characterized by a straight cutting edge and a rounded tip (which vaguely resembles one half of a sheep’s cloven hoof -viewed from the top), placed on the same axis of the cutting edge.
Because of its shape, it is not suitable for piercing tasks, making it ideal for rescue tools, sailing knives, or in all situations where it is necessary to cut without penetrating.

It is a variation of the sheepsfoot blade and has a more gradual decline toward the tip than the first one, giving shape to a more sharp tip.
The Wharncliffe blade is believed to have taken its name from Col. Archibald Stuart-Wortley-Mackenzie, 1st Baron Wharncliffe (October 6, 1776 - December 19, 1845). Lord Wharncliffe, British soldier and statesman who had an affinity for pocket knives, was well known to Joseph Rodgers and Sons, a noted cutlery company in Sheffield. When he presented them his pocket knife design, Sheffield embraced the idea and began introducing Wharncliffe-style blades in their folding knives around 1832.

In this type of blade the point faces downward and is under the cutting edge axis, assuming a Hawk Bill, or claw or talon shape. This tip configuration, not usable for stabbing, is mostly used in combat knives (a famous example of a knife with this type of blade is the karambit).

Within this family (or even it could be considered a separate type), we find the Hawkbill (or Pruner) in which the back of the blade is very pronounced towards the tip, resembling a hawk's bill.