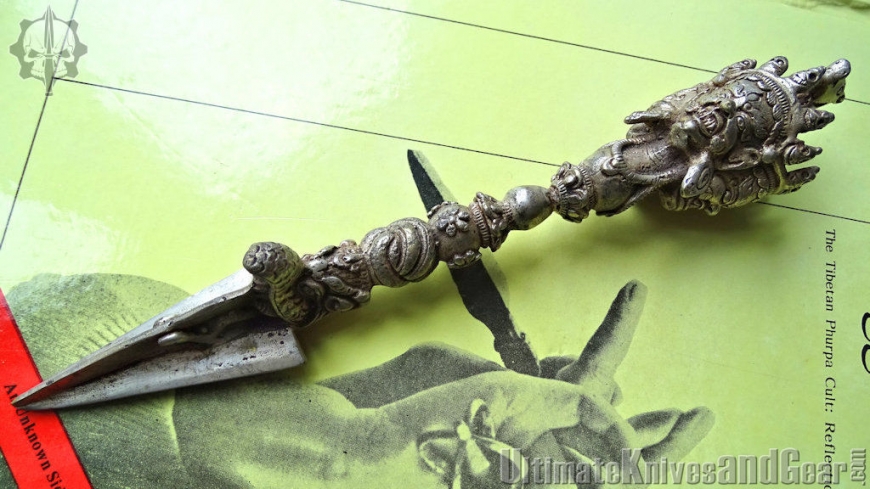 The Phurpa is a ritual object rather widespread in Asian countries that have been influenced by Tibetan. Sometimes called "dagger sacred" the Phurpa was used in rituals by high level tantric practitioners, to fight evil spirits and to destroy obstacles.

Its name is composed by the term "phur" that is the Tibetan equivalent of the Sanskrit word "kila", which means peg or nail. The Phurpa was in fact a tool that stuck in the ground, was binding and nailed the evil spirits.
The term Phurpa is used primarily in Central Tibet, while Phur-bu is used more often in Kham, Amdo and Ladakh.

It seems that the original shape of Indian “kila” may have been very similar to that of Phurpa, with a three-sided blade used as pegs that were driven into the earth to hold the rope stays of the tent.

The dagger cult is at least a thousand years older than Buddhism. The first traces of the Phurpa cult are not even to be found in the Buddhist sphere of influence. The earliest ritual daggers are rather to be found in Mesopotamia, where they have been discovered among the relics of Sumerian times. The Sumerian daggers served for soil consecration.
In addition to that there is the divine history mainly written by Buddhist monks. It begins with a legend from the 8th century A.D. which seems touching to modern observers: the Tibetans who were then known to be nomad cattle herdsmen, dreaded as robber, are according to the legend supposed to have come to the understanding that they are actually wicked barbarians. Endeavouring to achieve a more refined way of life and to follow the example of their neighbors, the ever-so-civilized Indians and Chinese, their then king invited Indian sages into the country who were to tell the Tibetan people the teaching of Gutama Buddha.
One of these sages, by the name of Padmasambhava, is today regarded as the founder of Tibetan Buddhism. It is said that Padmasambhava has discovered the dagger cult on his way to Tibet. The holy man from India, also known by the name of Guru Rinpoche, has obviously not brought the dagger cult from his southern homeland but came upon it in the Himalayas. It is said that the Guru had perfected the Phurpa cult which again implies the existence of the dagger cult before the appearance of the Guru. It is by the way unknown, which contribution Guru made to the perfection of the cult.

Phurpa cannot be properly classified, each dagger has its own individuality. One does not really resemble to other and even family likenesses meaning the recognizable origin from the same workshop can but rarely be ascertained. It is possible, with caution, describe generally the Phurpa.
There is still some sort of ideal type of a Phurpa. Describing it from the bottom, it has a three-edged blade, the length of which is often ornamented with meandering snakes. And the blade in turn sticks in the mouth of a "Makara". This is the Sanskrit word for crocodile, but what is meant here, however, is a mythical monster. Above the Makara head there is generally an “eternal knot”. This is a symbol of luck. The handle consists either of a stylized lotus blossom. After that there is three-faced head, often but not always baring his teeth in wrath. The upper end is occasionally shaped like a horse’s head reminding one of Tamdin, the horse god, or some other Buddhist symbol. 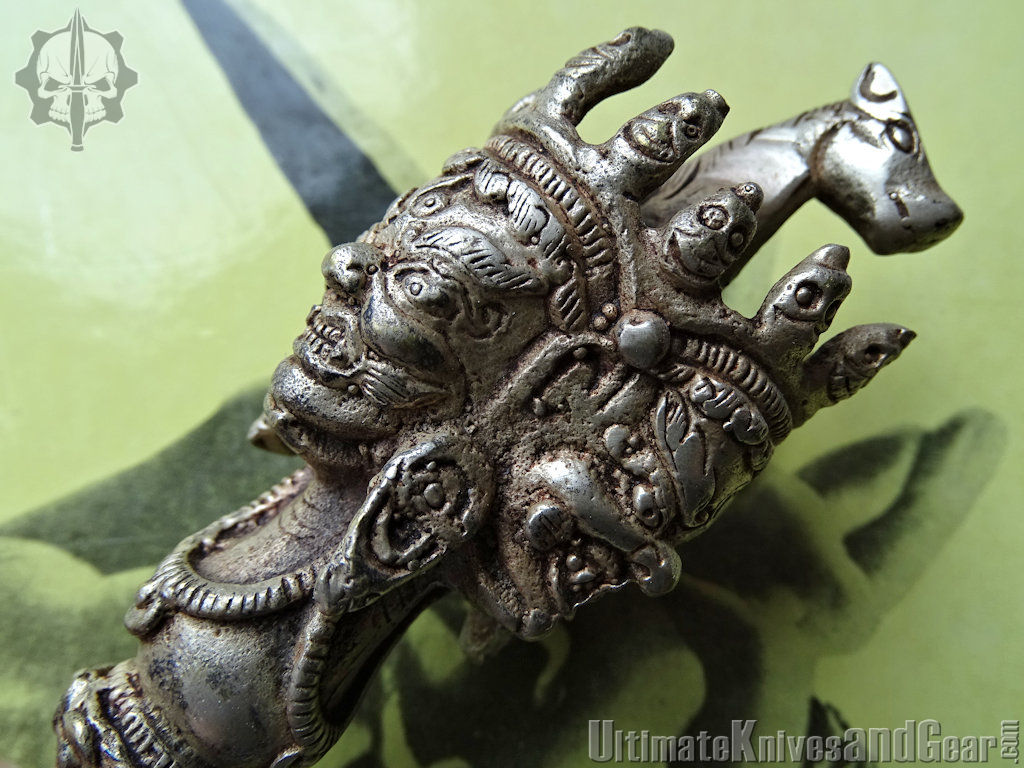 The triple blade of the Phurpa symbolizes the overcoming or cutting through of the three root poisons of ignorance, desire, and hatred, and also represents control over the three times of past, present and future. The triangular shape represents the element of fire and symbolizes wrathful activity. The tenacious grip of the makara-head at the top of the blade represents its ferocious activity. 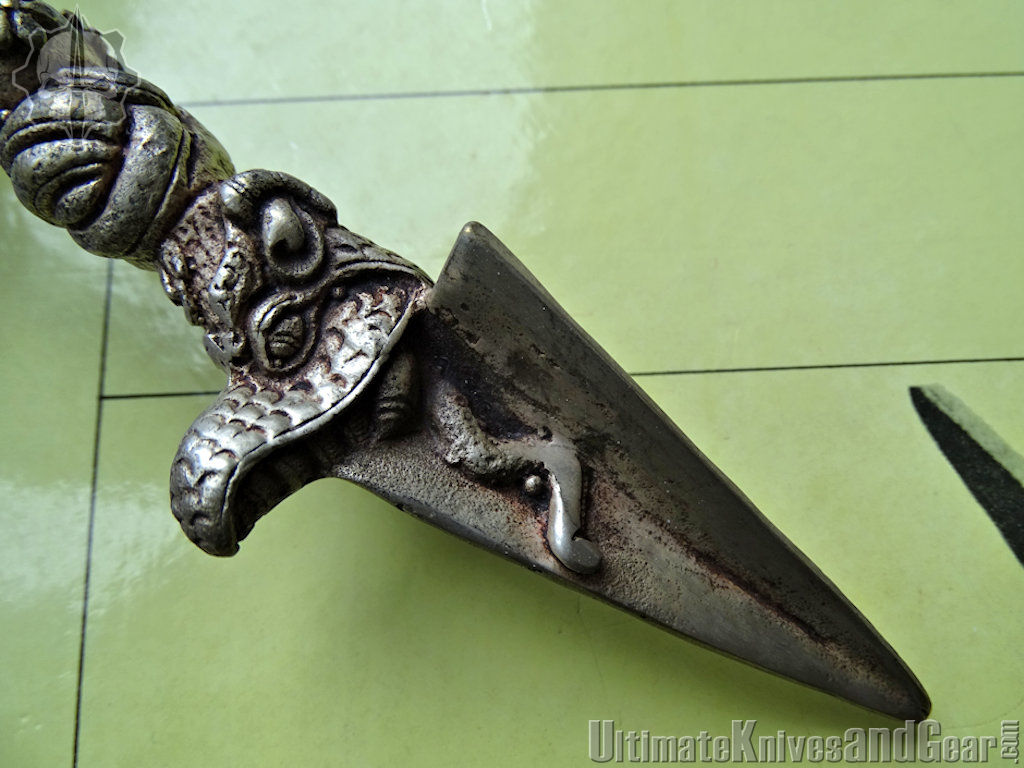 The practitioner when using the Phurpa, after meditating, recites the sadhana of the Phurpa, and then invites the deity to enter into the dagger. As he does so, the practitioner visualizes that he is frightening and conquering the evil spirits by placing the evil under the point of the Phurpa. Sometimes the practitioner visualizes throwing the Phur-pa in order to impale and subdue the spirits. The success will depend on the practitioner's spirituality, concentration, motivation, and his karmic connections with the deity of the Phur-pa and the evil spirits.
A spirit (more commonly called ghost in the West) is a non-physical being that lingers in the confusion between the different kingdoms. If skewered with Phur-pa, the spirit was brought out of this state of confusion and had the chance to be reborn (probably an inferior species of the human realm).

The ritual dagger is usually made of various materials, such as clay, wood, ivory, metals such as silver, iron, copper and bronze, or a combination of these, and is considered a powerful element to chase away evil spirits.
The lower part of the blade is said to represent "Method" while the handle "Wisdom"; these would have been two objects that were vital in the survival of people in these hash regions.