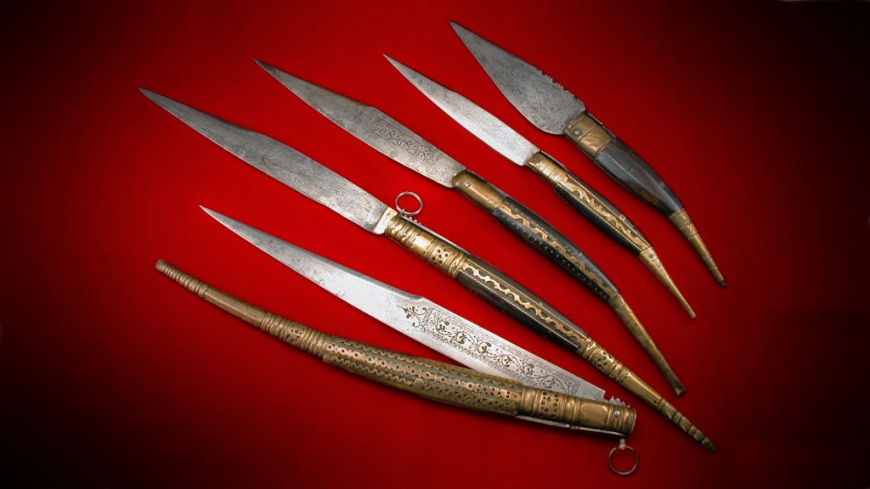 During the archaeological excavations conducted in these places numerous types of knives were found dating from the sixteenth century: fixed blades, swords, daggers and folding knives. All these tools played a key role in the life on board of the galleons: every sailor had his own knife, as a versatile tool in daily use, such as navajas, which in that century were regularly worn on their belts.
The term Navaja (pronounced na-vah-ha) is derived from the Latin “novacula”, which means razor.

This type of knife was called by various names, depending on the region and sometimes according to its size: in Andalusia it was called "mojosa" (from mojar, to wet), the "chaira" (skiving knife), the "tea" (torch); in Seville, the large navaja was called "santolio" , using the contraction of the Spanish word "holy oil". The name was a clear reference to oils or ointments applied during the last rites, since it was believed that a man who was in conflict with this knife was going to a certain death.
Due to its structure and blade design, ideal for slashing cuts and stabbing, the navaja proved in later centuries to be an extremely versatile weapon for close combat, mainly due to the ease of carrying and concealment allowed by this folding knife.
All these features have made this knife very popular in all regions of Spain, regardless of social class or political affiliation, although the use of the navaja was frequently associated with barateros.

The rise in popularity of this knife happened in a historical period of restriction in the use of swords and edged weapons, from numerous edicts that followed in the eighteenth century. In particular the edict of May 29, 1750 was entered into force by the disposal of the Marquis de la Mina - Spanish military Governor of Catalonia - who forbade the carrying of white arms and knife (as well as of all instruments that could endanger a person), except for some high ranking officials (such as ministers, officers of the Royal Haciennavaja-albaceteda or Intendencia, police, magistrates, nobles, and so on, for whom there were no restrictions on carrying any type of blade).
But, as so often happens, the imposition of laws which limited the carrying of knives, in Spain as in the Kingdom of Naples and in southern Italy, did nothing but increase the popularity of these knives mainly because they were intimately connected with the culture and tradition of these places.

The first knives were not equipped with any blade locking system and were designed primarily as utility or work tools that could be easily carried (both in an exposed or concealed way), then - in the first half of the '800 - the ratcheting system lock was adopted (so named for the characteristic sound produced by the blade opening). 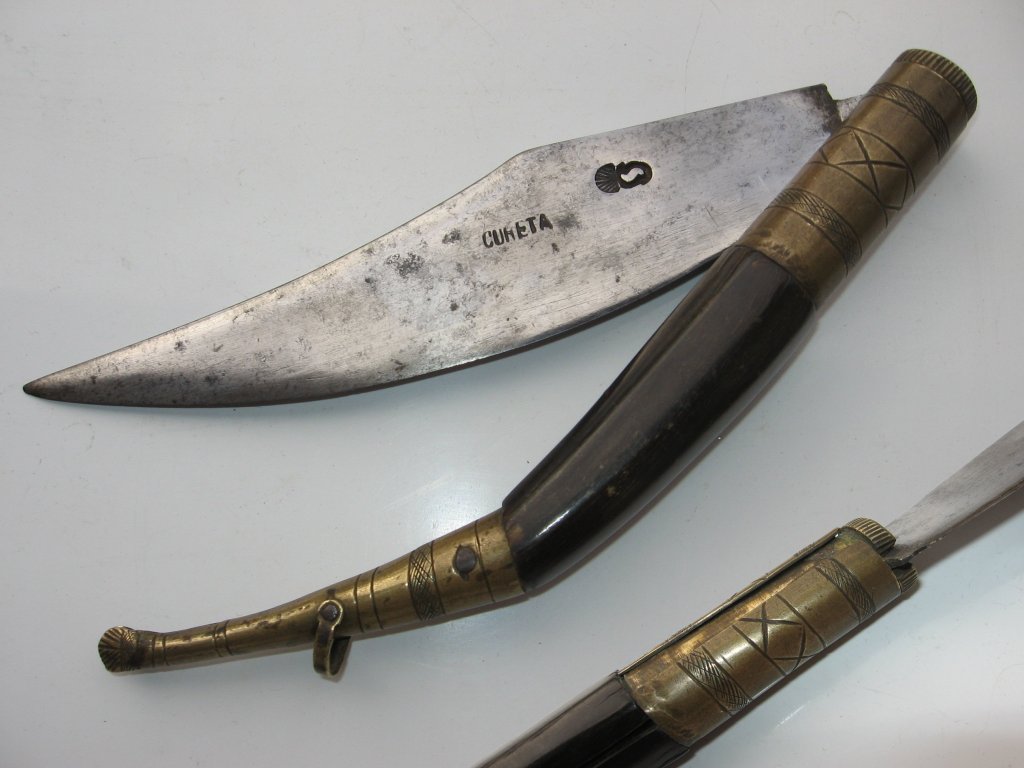 The navaja was made with different blade styles and handles, which varied according to the region of origin. This knife is characterized by a thin handle compared to a relatively wide and curved blade. Many models show the typical clip point blade, from which many historians believe that the famous American bowie has drawn inspiration.
Generally the blades was handcrafted in forged carbon steel, thanks to the long history and tradition of Spanish craftsmanship . The traditional knife was typically equipped with a handle of wood, horn, bone, copper or brass openwork and reinforced with coated steel or brass, but the finest specimens were made with more expensive materials inlaid with silver, ivory and even gold. 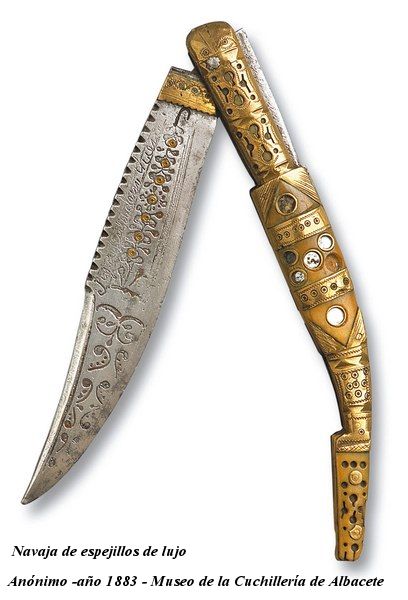 Despite official bans imposed by the edicts that followed in those centuries, the navaja became popular, both as a utility tool, but also as a symbol of the struggle of the Spanish warriors who opposed the Napoleonic invasion and occupation of Spain in the Independence War from 1808 to 1814.

Throughout this century in Andalusia the navaja became the emblem and tradition of knife fighting, which subsequently followed through to the art of fencing and was adopted by barateros; famous indeed is the Treaty of 1849 "Manual Baratero" which summarizes the technical handling of navaja.

However, in Spain the carrying of this traditional blade was not exclusive to criminals, and during the first half of the nineteenth century, the navaja was used by Spaniards of all social classes, including the most well-off as the clergy and the aristocracy. The proof of this is based on museum collections of ancient examples carved and decorated with expensive materials and with a level of manpower that could have been commissioned only by the upper classes.