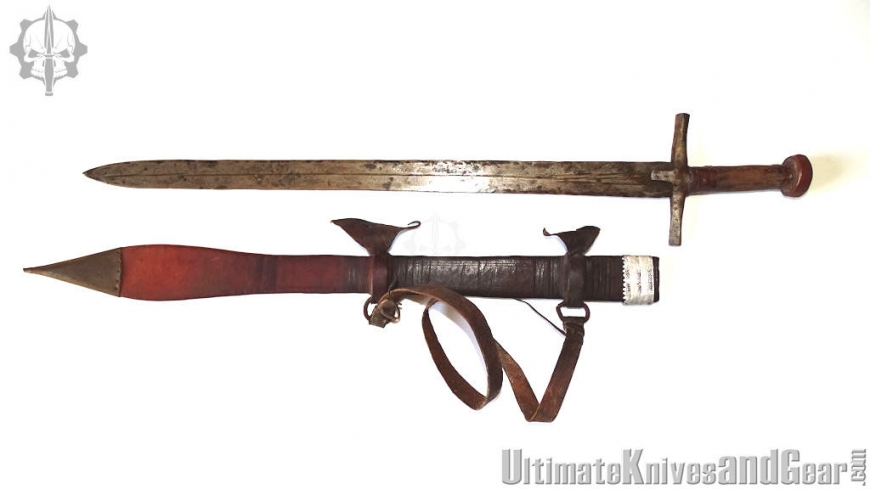 The antecedents of many Arab and Ottoman swords and daggers are to found in the sword of Sasanians and also in those of Bronze Age Luristan (the current western Iraq).

The kaskara is a typical sword of the eastern regions of Africa, in the area that today comprises the Sudan and Chad.
This sword was used by the Baghirmi, an Islamic population that was made up of various tribes (“The Book of the Sword” – Sir Richard F. Burton).
While most surviving examples are from the 19th Century, the origins of the kaskara appears to date back to the 16th century and, according to North ("Swords and Hilt Weapons"), could have come from the Arabic medieval double edged swords. Many writers of the Victorian era argued instead that the kaskara drew its origins from the European medieval swords, but this view is not shared by all historians.
The kaskara sword is worn horizontally across the back or between the upper arm and thorax; according to Spring (African Arms and Armour, London: British Museum Press, 1993), this sword has continued to be worn until quite recently, mostly in rural areas of Darfur.
The double edged blade of the kaskara generally has a length under a meter, and the edges are typically parallel for most of the length of the blade. The latter is often equipped with a central fuller that extends from the ricasso to the tip, or to ¼ or 1/3 of blade length. There are also other versions, typical of European trade blades of the times, which have more narrow and relatively short fullers.
There were often European bladesmith's marks on the blade, but these are still not a reliable indicator of the origin of the sword because they were often copied by local smiths. Sometimes there were Koranic engravings on the blade, regardless of the origin of the sword.

The crossguard of the kaskara hilt, generally made in forged iron, would seem to look very much like the medieval European one, but according to Briggs("European Blades in Tuareg Swords and Daggers," The Journal of the Arms & Armour Society), it would only be a coincidence since its origins appear to be Turkish. 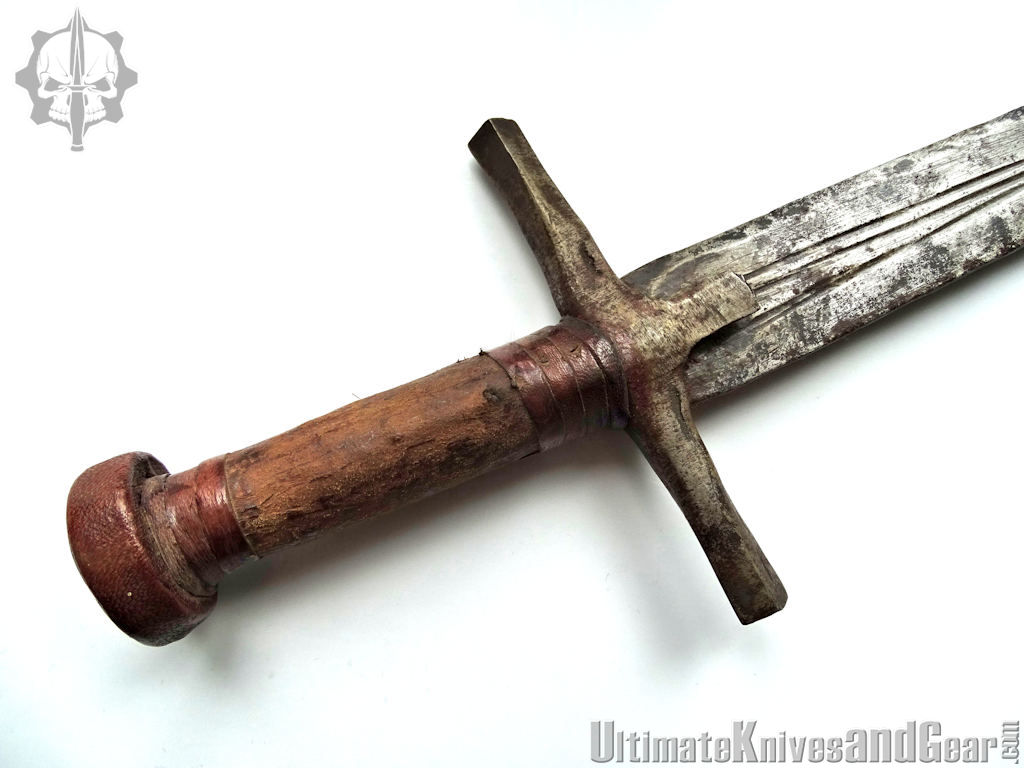 The pommel disc-shaped, mounted with the flat faces perpendicular to the axis of the blade, in the poorer examples is generally made of wood covered in leather, as well as the handle, while the finest specimens are made with silver or gold ornaments or coatings. 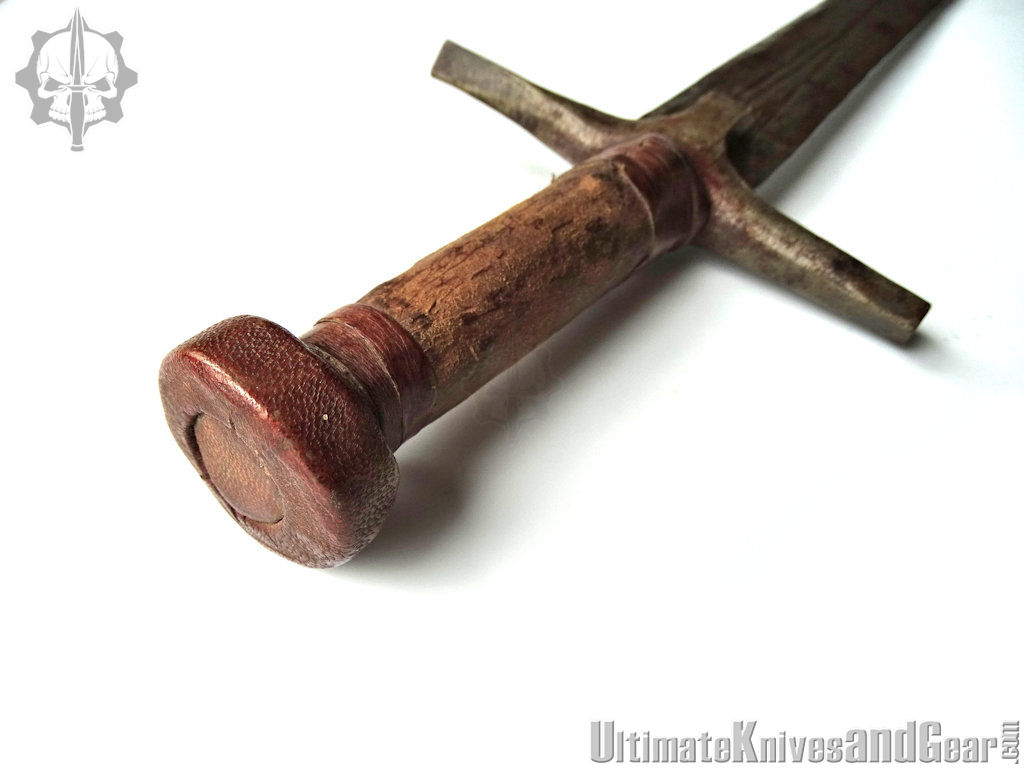 The sheath is very characteristic and is usually made of brown or red-brown leather, with a typical leaf-shaped flaring near the tip. The best specimens are equipped with chapes and other fittings in precious metals. 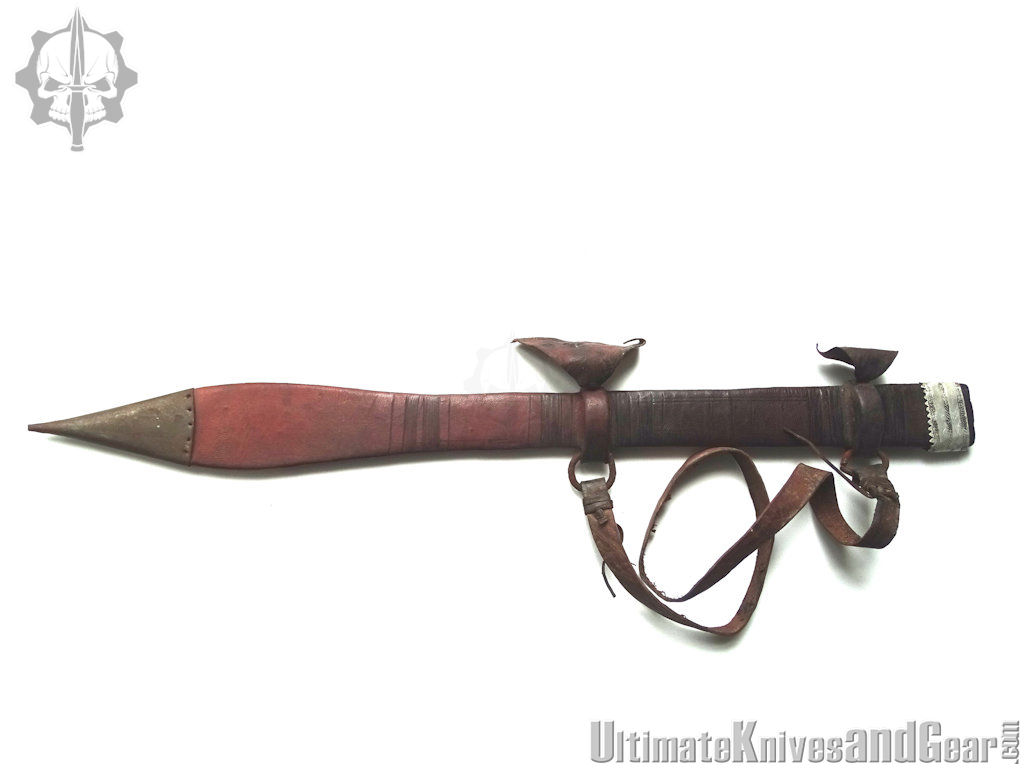