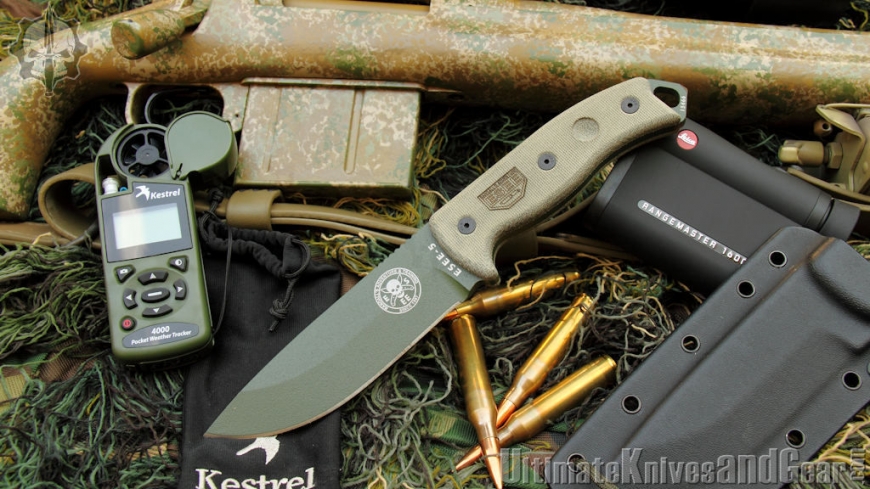 Born from hands-on experience, from training and hard survival test in hostile environments, the ESEE's products are designed to provide great performance for all levels survival enthusiasts.

The ESEE ® Adventure Training, along with Randall's Adventure Training ® (RAT), are part of TransEquatorial Solutions Inc. ® society, directed by Jeff Randall and Mike Perrin, which is responsible for providing training and logistics solutions for military, law enforcement and civilian enthusiasts of the art of survival in hostile environments.
In 2007, at the conclusion of the contract with the Ontario RAT Knives, was born the ESEE whose acronym defines the foundations of society: Escuela de Supervivencia (survival school) Escape and Evasion.

The Alabama's company products are famous for their durability, comfort and cutting efficiency, and also because they are made as a result of field trials, generally carried out into the Peruvian jungle where normally the students of survival school are trained. Therefore the ESEE knives have always been designed by qualified individuals with direct hands-on experience.
In particular, the 5-model, extremely popular among survival enthusiasts, was designed by military SERE (Survival, Evasion, Resistance and Escape) instructors as a hard-use downed pilot’s survival knife.

Becoming a prisoner of war has historically meant that a soldier can experience the brutality, torture, coercion, loneliness and isolation, along with many other forms of deprivation. The U.S. military has for long time recognized the need of training programs to help soldiers in service to effectively deal with survival in hard environments, the escape from an enemy and capture by a hostile force. The SERE training school, in its current form, was the result of the experience received from the surviving prisoners of Korea's war, and it has been implemented by the Air Force in 1961.
Initially, the Air Force had used the term "survival" for a training course that included everything. The Navy has coined the term "SERE" in 1970, according to the manner in which instructors teach the tasks to be subdivided (survive, evade, resist, and escape). The army then followed the Navy, and the Air Force Survival School became standardized with other services, incorporating the SERE in 1980.
The survival training is provided to those military personnel designated as “high risk of capture” (e.g., aviation personnel, snipers, members of Special Forces, and intelligence gatherers). The course is designed to give students the skills to survive and evade capture or, if captured, to resist interrogation and exploitation and ultimately plan an escape if feasible.

The first week of training takes place in an academic setting, where students study the survival techniques including evading and resisting to an enemy force. Subsequently, the students move on the field to improve land-navigation skills through unfamiliar territory and how to locate potable water, hunt and trap small animals, build small shelters, and differentiate edible from poisonous plants. During this time period, students are forced to deal with hunger, uncertainty, fatigue and discouragement to fortify their experiences.

Finally, students begin the live evasion portion of their training,primary task initially is to reach various navigation objectives (i.e., make contact with friendly forces) several miles away by successfully moving through hostile territory.
At some point during this evasion phase, students are captured by simulated hostile forces, where they are transported to a fake prisoner camp. This is indeed the most memorable, and ultimately the most physically and psychologically demanding, aspect of the training. 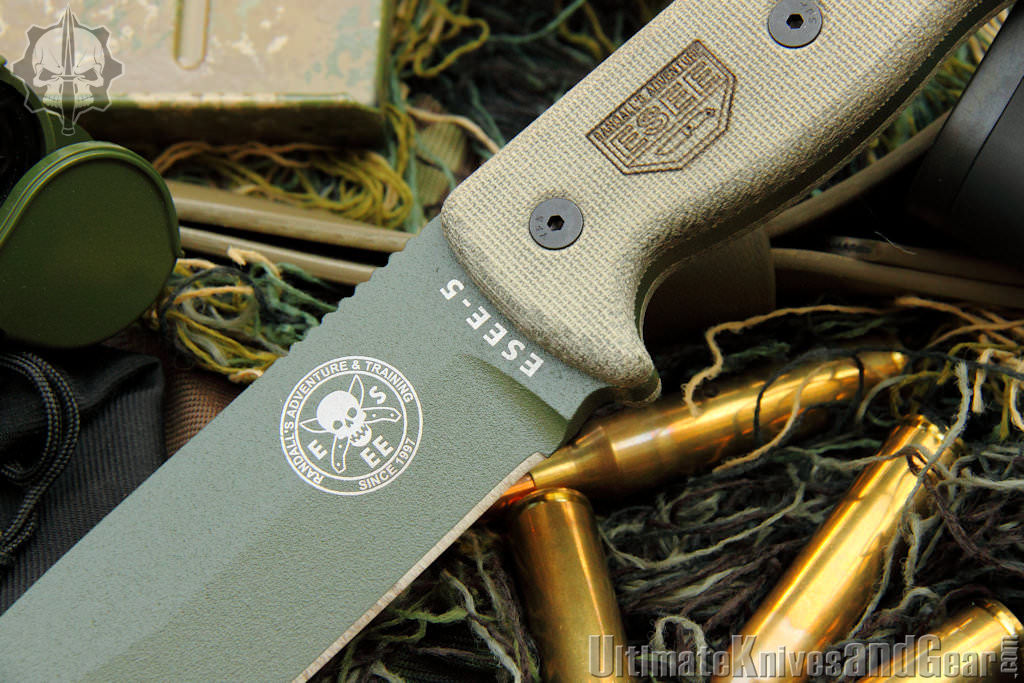 ESEE-5 has been made with the express purpose to facilitate, as far as possible, what you would have to do in a context of forced stay in adverse environments. This knife, considered by many as one of the best for survival uses, is made of 1095 carbon steel hardened to 55-57 HRc. This steel is well known and used for various applications for more than 100 years; it has excellent edge retention and, with an appropriate heat treatment, it offers great flexibility and strength performances.
Of course, as for all carbon steels, it is subjected to rust. To limit this drawback the knife is coated with a rather resistant powder coating but, clearly, it is inevitably destined to wear out after a certain period of time. 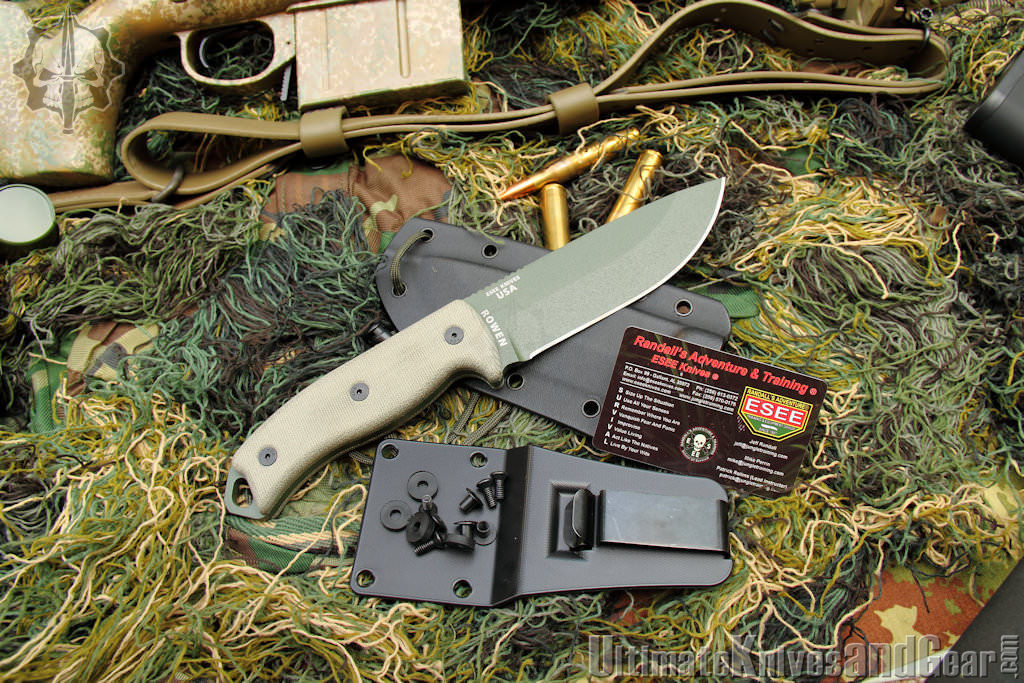 The knife has a full tang construction, allowing to use it even for most hard works such as chopping and batoning. The blade length of 133 mm and 6 mm thick, ending with a drop point, is made with saber grind with a jimping on the spine for the thumb arrest. The spine has a constant thickness up to 2,5 cm from the tip, making an ideal structure for heavy work uses. The blade is available with plain or combo edge, and black or OD green coating. There is also an high visibility version: the Venom Green with orange fluo G10 handle.

The knife ends with a glass breaker, formed on the exposed tang itself; obviously it is not as efficient as a dedicated glass breaker made of tungsten carbide, but it works quite well. 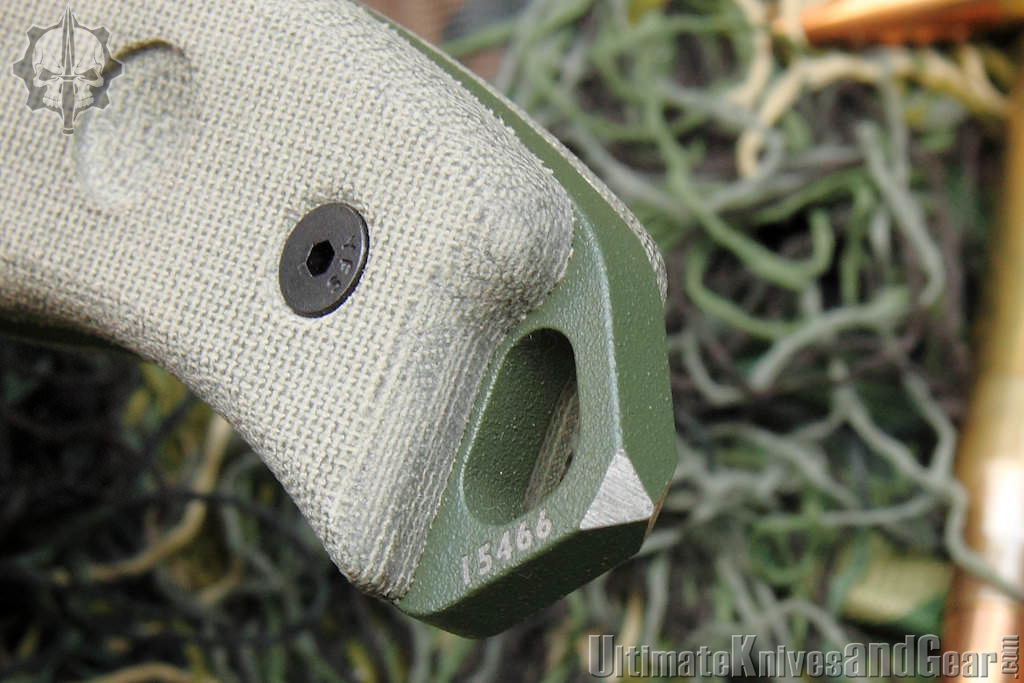 The handle is made of Canvas Micarta, with confers a good grip, thanks also to the ergonomic design of the handle. Onto one of the two scales has been practiced a bow drill divot designed to be used for lighting the fire by friction, using a makeshift bow. 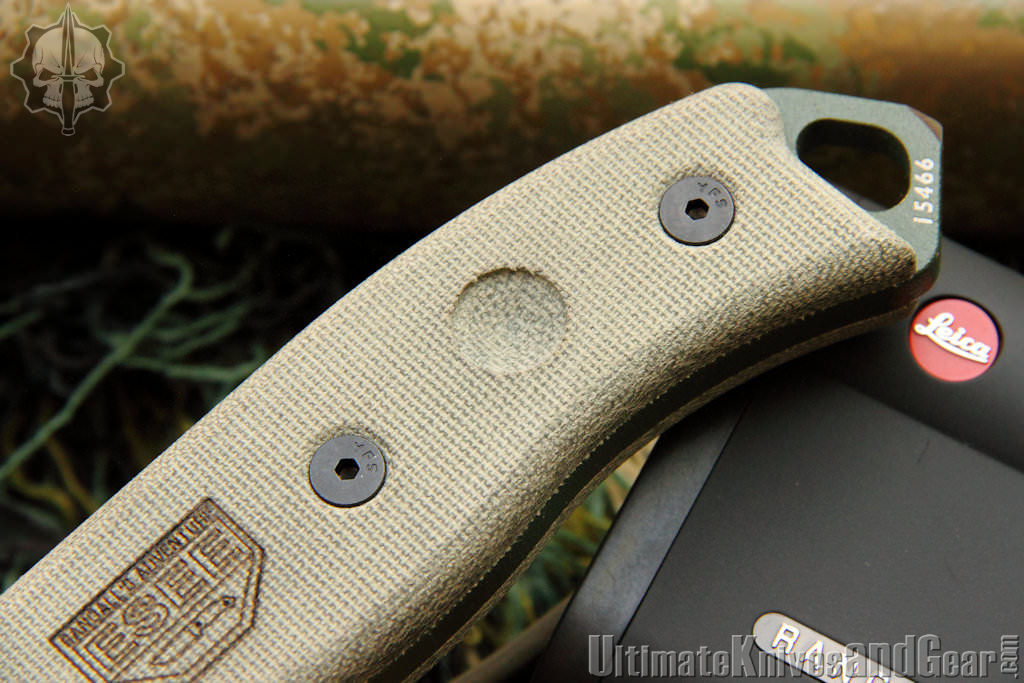 The Kydex sheath is shaped on the knife, following its forms, in such a way as to reduce as much as possible the encumbrance. As usual for this kind of sheaths, it was drilled a hole that connects the inner part of the sheath with the exterior, in order to drain the water from the sheath. The sheath also comes with pre-adapted lanyard.

Knife retention is very good and can be adjusted thanks to a tensioning screw to optimize and adapt it to your needs. This solution is extremely smart and therefore very appreciated. 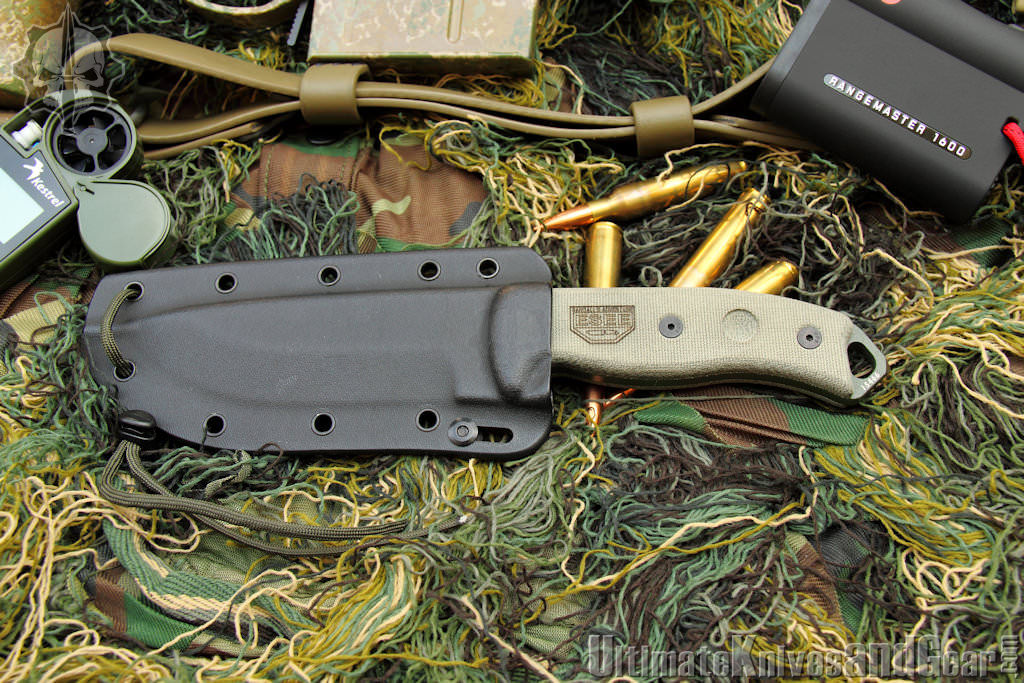 The knife transport systems are manifold: the sheath is equipped on around its entire perimeter of rings to be able to attach the sheath adapting it to your needs. It has also supplied the ambidextrous clip-plate, which is easy to mount it with screws to fasten it quickly and easily to your belt. It is possible to purchase separately a MOLLE compatible adapter or a nylon MOLLE back, to associate it to kydex sheath. In addition to this upgrade, on the official website it is possible to buy pouches, which is useful to insert survival kit.

ESEE ® has distributors in various corners of the world. In addition, the owners of the company interact with customers via forums, email and phone, to prove their authenticity but also as demonstration of their attention and care towards the customers.

To test the product, we have made chopping and batoning works, during which the knife has always responded in an excellent way. The blade has the perfect structure for this kind of operation. Regarding the batoning, of course, the only limit of the operations is given purely by the length of the blade. It was also made a test of fire ignition by bow, to evaluate the convenience and effectiveness of its bow drill divot on the handle, designed to accommodate the drill.

Even in this case, the tool has proved extremely useful, performing its function in an optimal way, thanks also to the proper hardness of Micarta used for the handle of the knife, which allows to rotate quickly and fluidly the drill. Surely, in the absence of the knife, you can still solve the situation in other ways, such as by making a hole on another piece of wood or using a stone, but to have already a solution on a single instrument, it is often priceless and extremely comfortable.

ESEE®'s knives are extremely popular among the military and law enforcement personnel, thanks to their reputation, and their fame is so widespread to the point that they have been used in several films, including BATTLE LA, TRANSFORMERS, G.I. JOE, RED DAWN (2012) and Arnold Schwarzenegger's next film TEN (which will be released in the U.S. in January 2014).

The company's policy regarding the warranty on the ESEE®'s products is absolutely admirable, and we have to bring what is written on the official website because it really deserves to be read:

"If you break it, we will replace it. Warranty is lifetime and transferable. In other words, we warranty the knife no matter how many times it's been traded, sold or given away - no sales receipt or proof of purchase required.
A lot of folks have asked us how we can stay in business offering such great customer service and warranty protection. The answer is simple; we believe that American consumers, as a whole, are honest people. The occasional customers who are dishonest are few and far between, so even if we lose every once in a while due to dishonesty, our reputation of great customer service, regardless of the situation, brings us more good customers. ESEE KNIVES ARE NOT THROWING KNIVES! They are hardened to a higher Rockwell than throwing knives and will most likely break if thrown, possibly harming the user. So, do yourself and your ESEE knife a favor and DO NOT throw it. Using any knife not meant to be thrown as a throwing knife is idiotic! We would rather idiots not buy our knives.[...]"ESEE

How we can't share these statements! The ESEE®'s philosophy has always been oriented towards the development of products that meet the expectations of users and to offer superior customer service. Infact they appreciate the feedback and experiences provided on their products by users around the world.
This doesn't mean that you have to use your knife to make destructive testing, how for example to shoot on blade with different gun or rifle calibers, or to use knife like a chisel on a stone (all video which unfortunately you can see on web). It isn't sane and intelligent and don't demonstrates the validity of products.
The advantage of buying an ESEE® knife is given by the certainty that this has been field-tested by real experts, and therefore it meets the requirements for its use as a real survival knife.

The article has been published on the magazine Armi & Balistica n. 22 (November 2013)