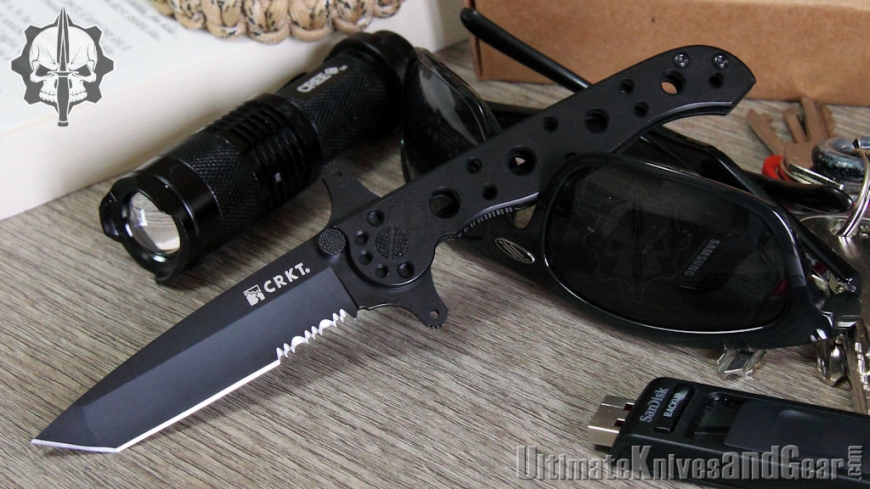 The hit M-16 series made by CRKT (Columbia River Knives & Tools) is one of their most popular ranges. Under the same heading, M-16, there is a line of EDC (Every Day Carry) knives and a line of military professional products.

Designed by Kit Carson, a Sergeant Major in the U.S. Army and currently a member of the American Knifemakers Guild, these folding knives are available with various types of handle materials and blade and, more generally, with two major designs of blades: tanto and spear point which come in three different sizes and with combo or plain edge. 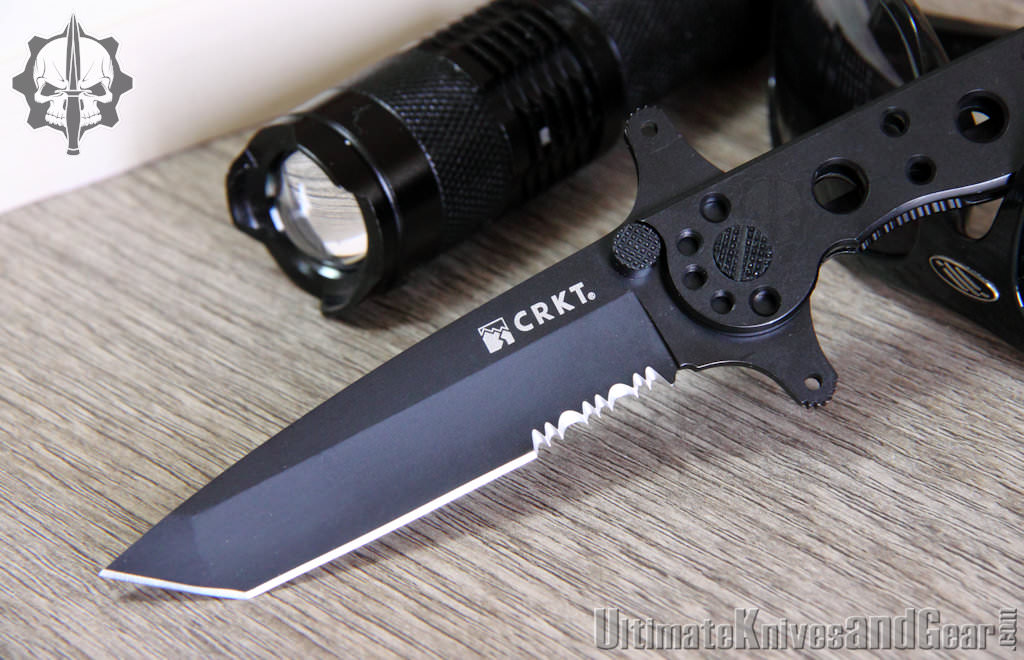 At the debut of this line, more than ten years ago, the M-16 was born as tactical knife (needless to mention that M-16 is the name of the famous American rifle); it was a simple liner-lock knife with a satin grey blade finish and handles made from anodized aluminum.
The real distinguishing feature of the Carson line was, and still is, the flipper opening system, a sort of blade extension that comes out from the handle of the knife when it is closed, which greatly facilitates and speeds up the blade opening operation with just one hand.
Thanks to the commercial success of this series not much time passed before CRKT started producing these knives with new colour and blade types (there are also models dedicated to firefighters).

In recent years, the M16 knives series were all equipped with a liner-lock mechanism with the addition of the patented safety AutoLawks system, which prevents the locking liner from accidentally releasing when the knife is open and locked.

The new model M-16 10K SF (where SF stands for Special Forces), whilst retaining the Carson Flipper opening system has a frame-lock mechanism instead.

This system differs from the previous one in that the blade locking takes place directly through the actual frame, which then becomes the handle of the knife.
With regard to the different blade locking mechanism and since, in theory, the frame lock system with the same quality of materials should be more resistant than the liner-lock (at least for the greater thickness of the flat spring that locks the blade, keeping it in the open position), this model has not been added to the AutoLawks system. 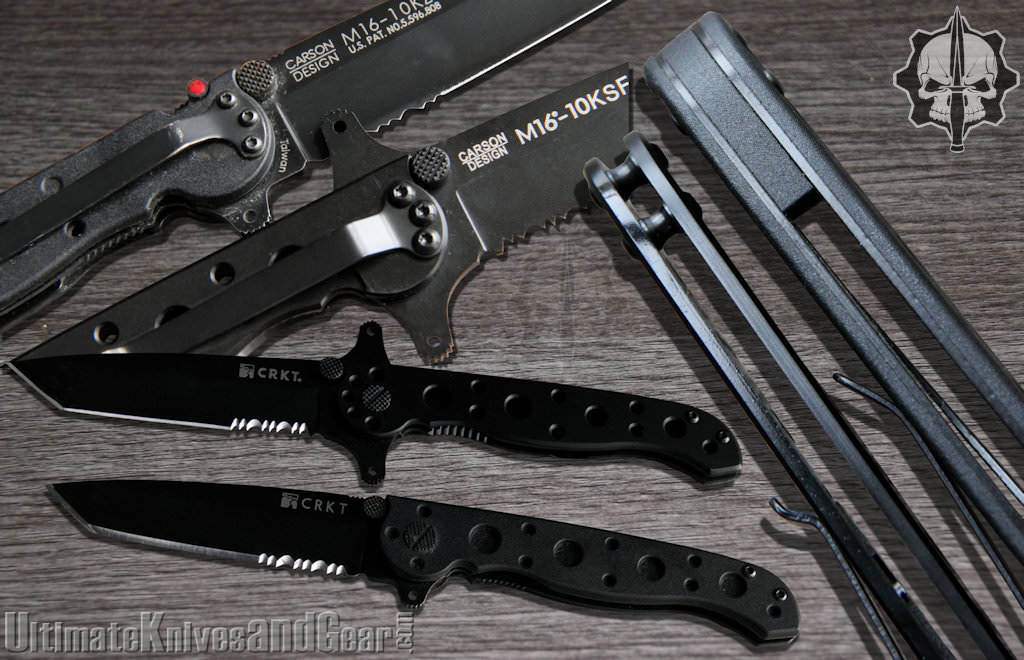 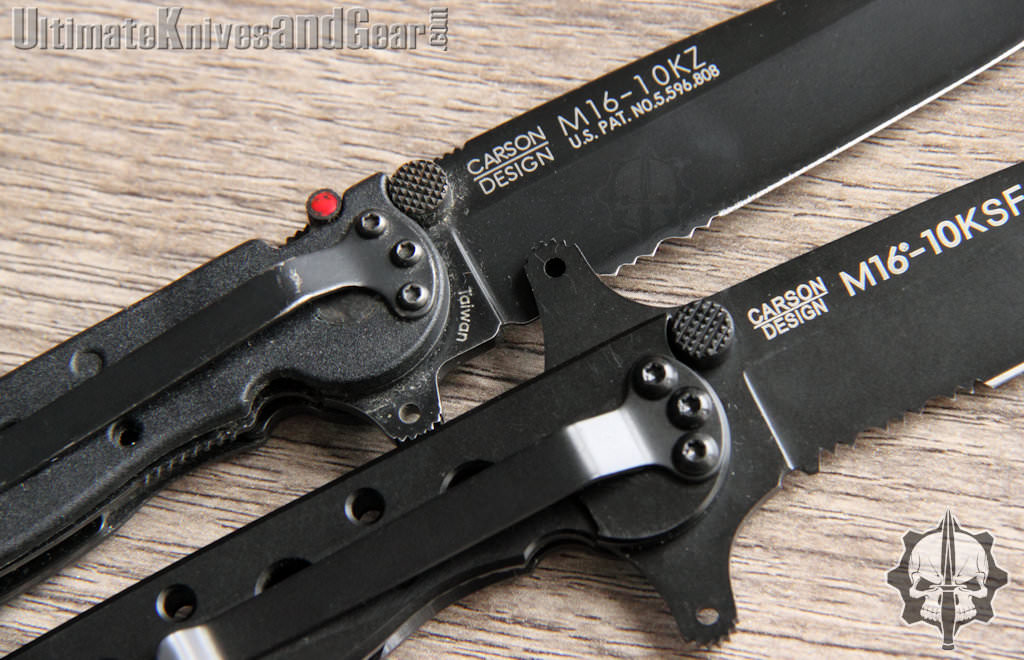 This product has been made even thinner (8 mm compared with 11mm in previous versions), while maintaining the same blade size, making the knife even more convenient .
The overall size of the open knife is 180mm, with 80mm blade length (edge 70.4 mm). The length of closed knife is very compact, with its 100 mm length of the grip, allowing it to be carried with extreme comfort in any kind of pocket.
This version has a tanto blade with hollow grinds, and it is made of Chinese steel 8Cr13MoV at 58-59 HRc, with a thickness of 2.5 mm and with a classic black finish made by electrophoretic deposition (EDP Electrophoretically Deposited Paint). The edge is combo, with partial serration towards the choil.

Another strong point of this folding knife series is the pivot around which the blade rotates. It is made in such a way that it is easily adjustable with a plain screwdriver and, in case of extreme need, it can also be screwed with a simple fingertip exploiting the knurling surface of the screw head.

Normally this tool interface allows you to easily adjust blade opening at your will, which is often not allowed with other knives that exploit special screws or owners systems (it is advisable not to exceed a too loose adjustment to the screw as this could cause security issues when using the knife).

On the handle is fixed (by three 1.5 Torx screws), a thin but sturdy steel clip that allows tip down position transport of the knife.
It is possible to customize the clip placement to be able to choose the side positioning, but not the tip up orientation.
On the blade there are also reinforced ambidextrous thumb studs with knurled surfaces to facilitate knife opening in all circumstances and with contrast and reinforcement functions on knife closing system.
Characteristic of the SF series is the double guard which is more prominent than on the other models. I don't think much of the addition of the double guard on this kind of knife having seen the use for which it is intended, especially as it is cumbersome and sometimes catching occurs, but this is simply an observation that stems from personal tastes.
Blade opening is very fluid thanks to the presence of brass washers on the pivot; the opening can be made either with the use of thumb stud and, even quicker, with the Flipper system, as described previously.

The handle, with its skeletonized design, is made of 2Cr13 stainless steel (roughly comparable to standard DIN X12Cr13, or AISI 420), and from this is obtained the flat spring, which acts as a locking system of the blade as provided in the frame lock systems. The thickness of the frame is 2 mm, ensuring sufficient strength for the most varied daily operations. 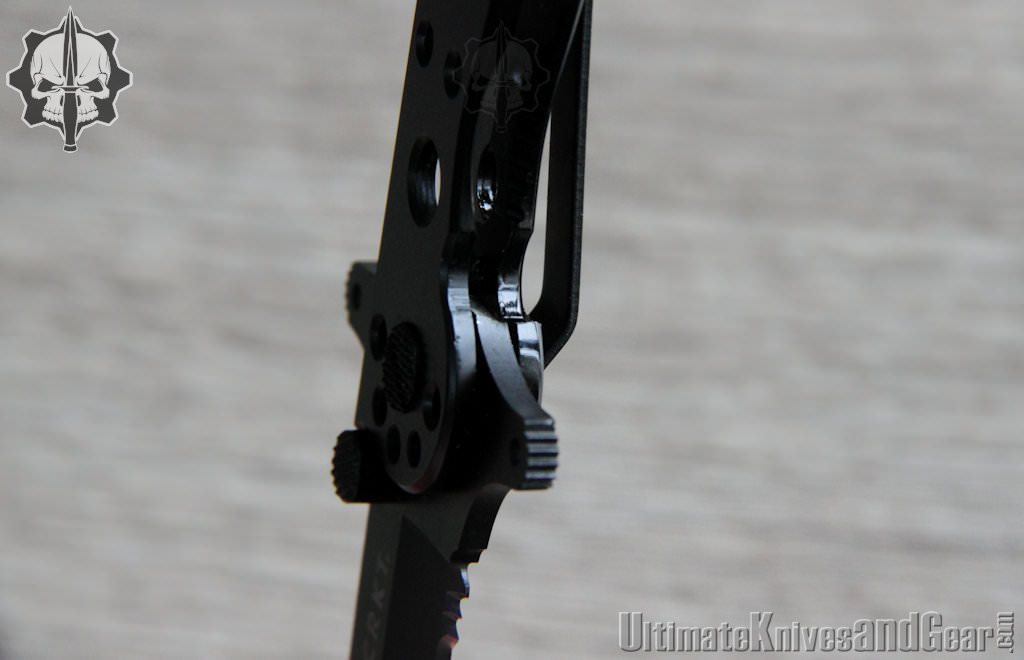 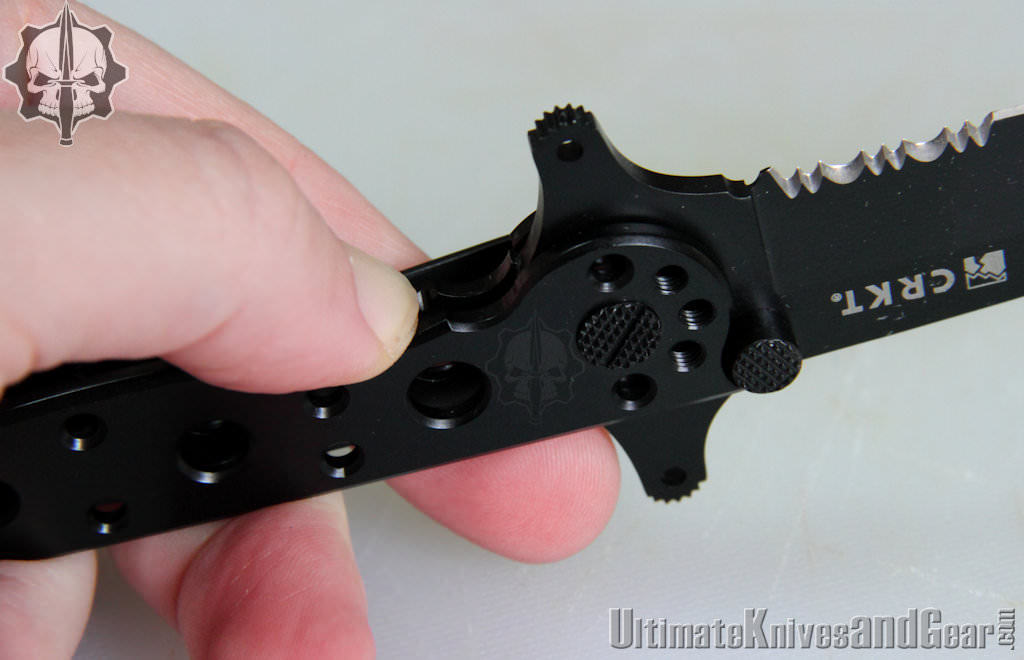 Knife locking system, in addition to ensuring a certain robustness, is well made and it is finished so as to ensure that the blade is free from backlash when put into the open configuration.
It must be emphasized, however, that releasing the blade with one hand is not immediate and quite difficult, especially for those people with large fingers, because of the limited space which is available as one has to force a finger on the frame that locks the blade. Perhaps this problem could be solved by making the flat spring protrude more from the handle profile. 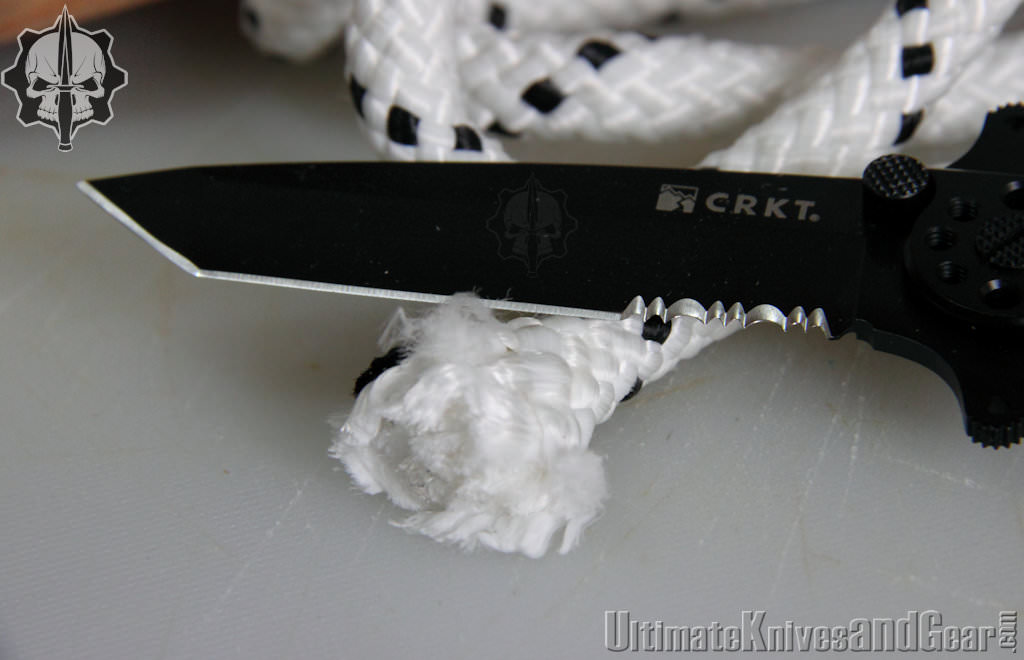 The knife, because of its EDC usage, has been tested on materials such as cardboard, mooring ropes, paracord, paper, and other materials that potentially we could meet during the day.
All tests give positive results, showing that product sharpening is suitable for this type of use.
Some problems may be encountered if the knife is used to cut small objects on a supporting plane (for example a cutting board), as in this version, because of the small size of the knife and blade the guard protrudes too much and goes up against the plane on which it is cutting (in essence, it appears that the guard does not have the suitable proportions compared to the size of the knife). 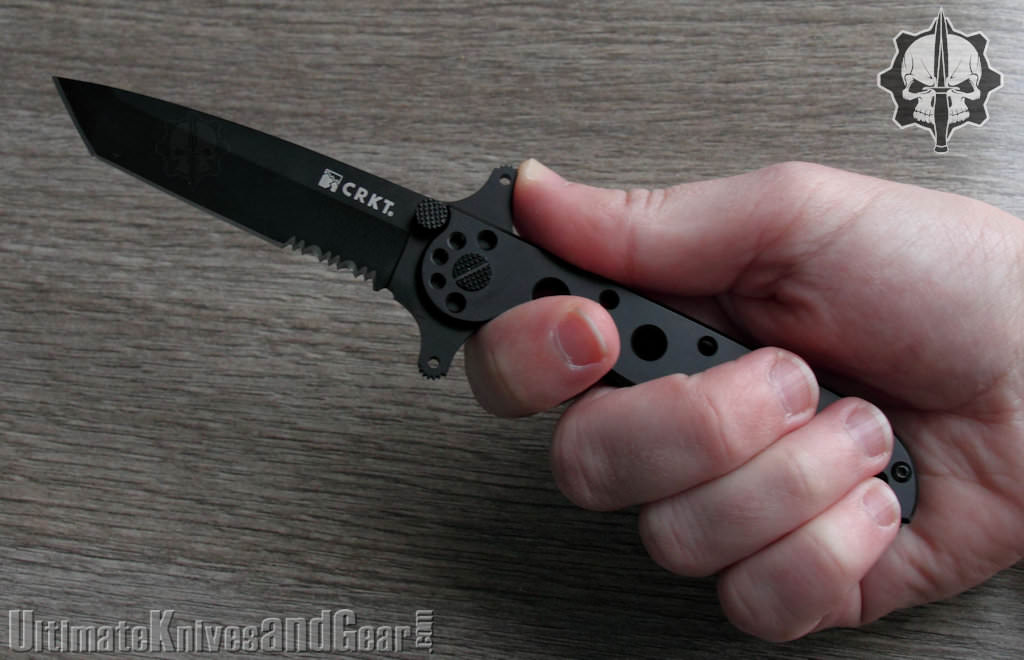 Overall, this new M-16 model is a good EDC knife, with a strong military design as its predecessor, but it is thinner, lighter and comfortable to wear, in addition to being able to fully meet daily needs.

This article has been published on the magazine Armi&Balistica n.26