The Alpha, one of the first knives of the Kizlyar Supreme’s tactical series, was relaunched in 2014 with some new features.

As evidence of the commitment and dynamism of this young Russian company who are always oriented toward improving the quality of their products, many models have undergone changes and improvements over the years, mainly related to the choice of materials and production techniques.

The new Alpha model, founder of the Kizlyar Supreme's tactical series, is now also available with combo blade, with partial serration towards the choil, unlike its predecessor which was only available with a plain edge. 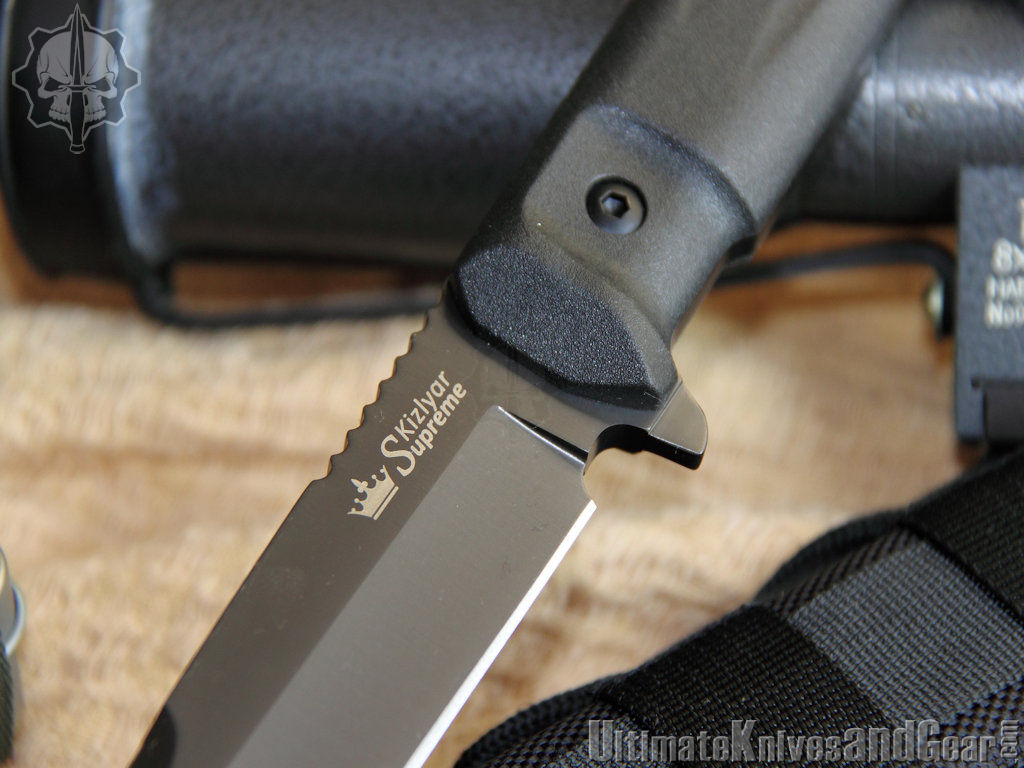 The design of the full tang knife was unchanged compared to the first generation: the drop point blade, with hollow grinds and false swedge, has a length of 15 cm and a thickness of 4.75 mm, and is made of D2 steel, hardness 58- 60 HRc, with an anti-reflective gray titanium nitride coating (obtained by PVD - Physical Vapour Deposition), but also available in satin or black version and with AUS-8 steel.

On the blade spine there is a not too aggressive jimping, and the knife is equipped with a single guard of about 7 mm. 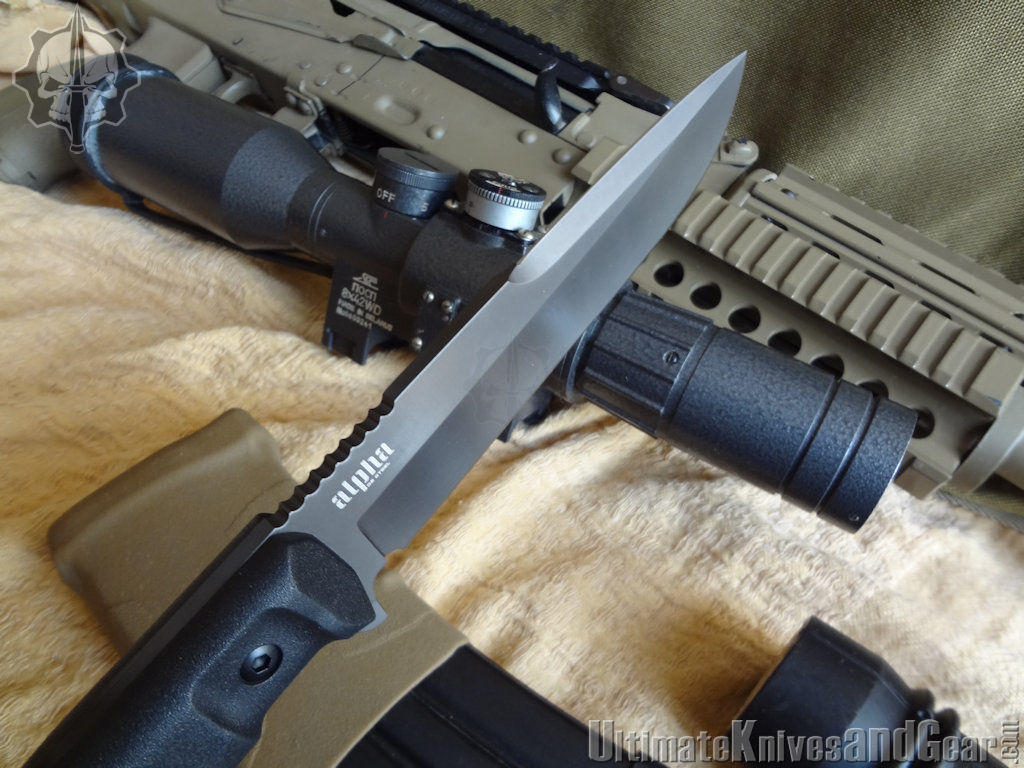 Like the other products of the Tactical Echelon series, the Alpha has the same ergonomic design of the handle, making it easy to grip the knife even when wearing gloves.
What varies is the choice of the material that was previously in Kraton. In the new generation product this has been combined with ABS, which provides greater rigidity and strength, with the Kraton coating, giving a more comfortable and firm grip on the handle.

The simple and linear form allows for rapid changes of the grip, and is characterized by only one recess to place the index finger and two cross-cutting millings. 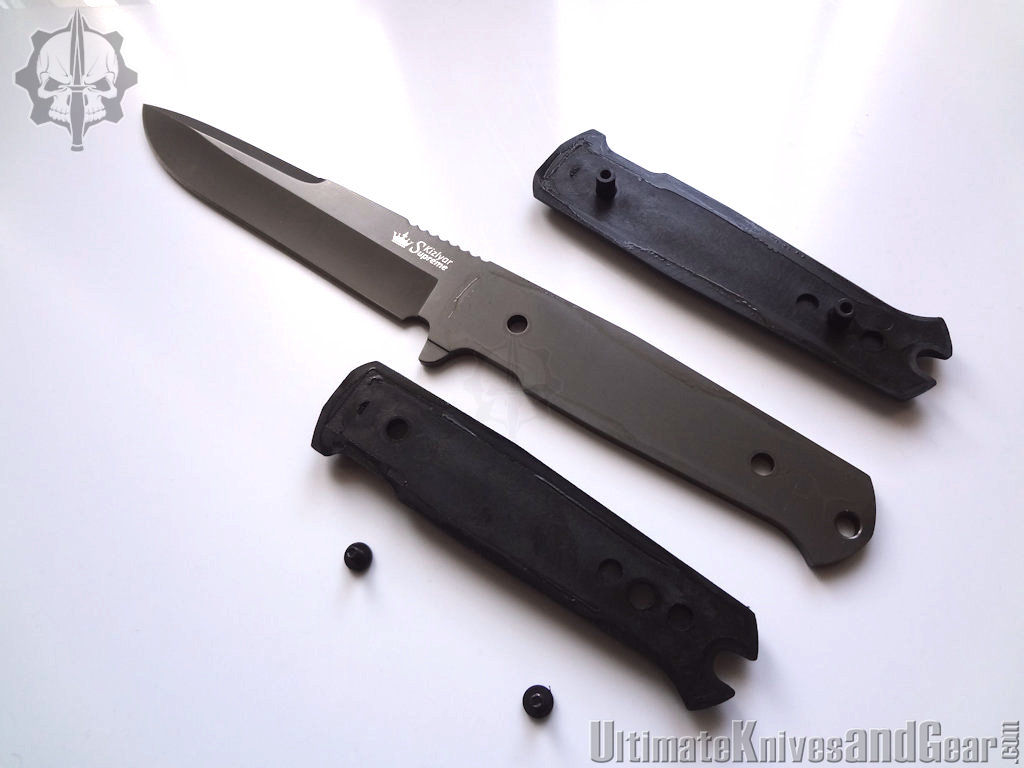 The two handle scales are easily removable via two pairs of Allen screws, allowing you to quickly perform maintenance of the knife. It comes equipped with a black and OD green lanyard with a colored bead (in this case yellow, a colour not very appropriate for a tactical knife with military character). 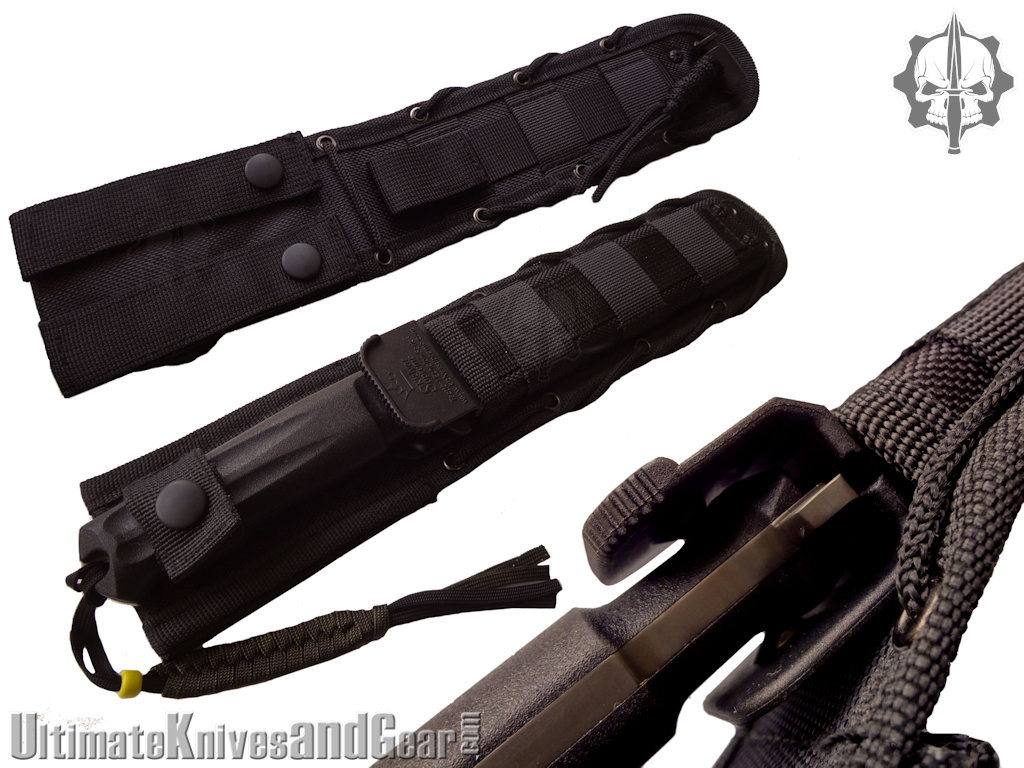 The sheath has also undergone some minor modifications: to the previous version have been introduced, in addition to the sturdy belt loop, two additional belt loops with Velcro and clip so that the sheath can be rotated and moved sideways to allow each user to configure in the most convenient position according to the type of the port and the inclination desired for blade extraction.
The retention system of the knife is given by a pressure lock mechanism, which acts on the handle grip (where is placed the notch for the index), formed in the inner part made of kydex, inserted and fixed to nylon sheath by Allen screws.

Overall the sheath, fully compatible with MOLLE system, is well designed and is made with a good quality nylon; the cords used, however, don't have the same quality of the other accessories. 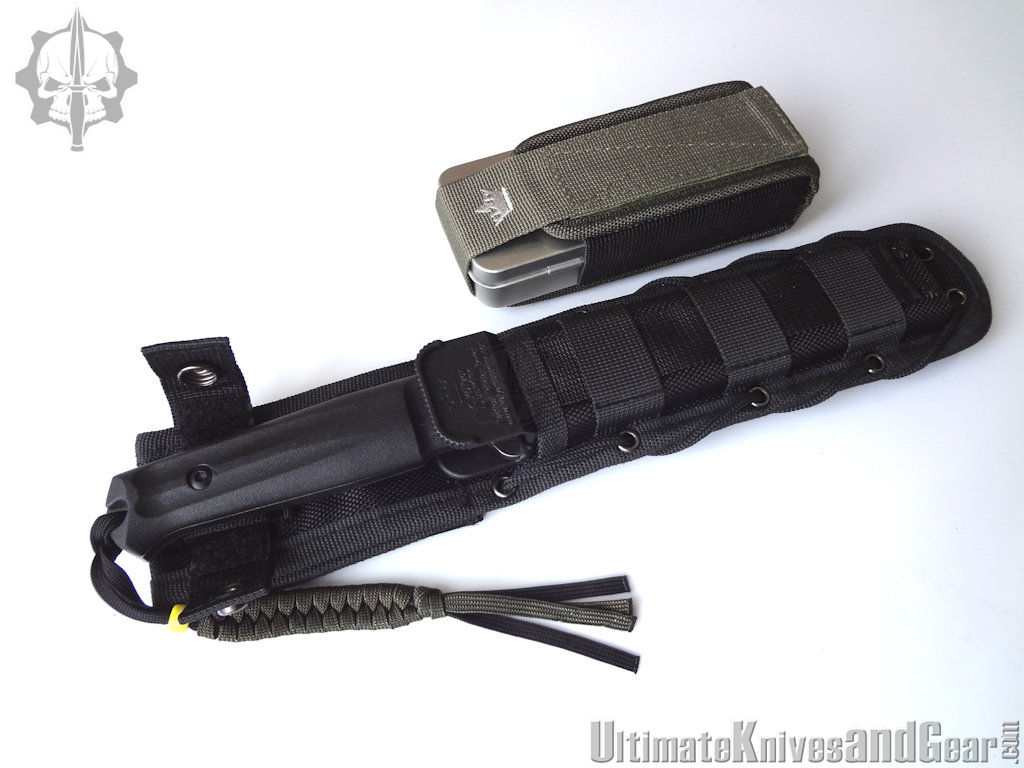 As additional equipment, sold separately, the Kizlyar Supreme has created a survival kit stocked with everything you need (scalpel, fire starter, whistle, brass wire, bandages, alcohol, fishing line and hooks, a mini-tool multifunction, etc.) and kept in a tin box with a portable pouch made in ballistic nylon camo (but also available in black). 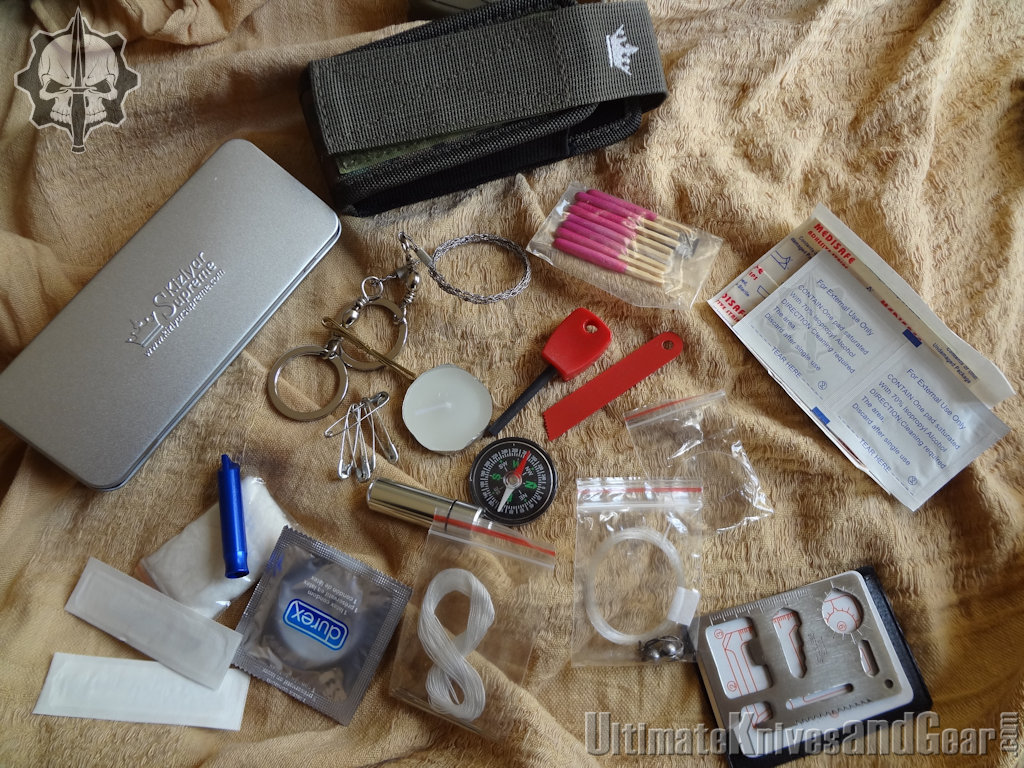 The knife has been tested for general camp uses, assessing the strength of the tip (stabbing it inside seasoned wood and bending the blade on the two sides, tearing the wood fibers) and performing some qualitative cutting tests (on mooring ropes of different quality and diameter, on seasoned woods to create igniting material, and so on).

On average, the cutting capacity of the product has not proved to be excellent, but is still satisfactory. The surface finish has shown excellent quality and it is very durable; also the tip has passed unscathed the penetration and resistance tests. 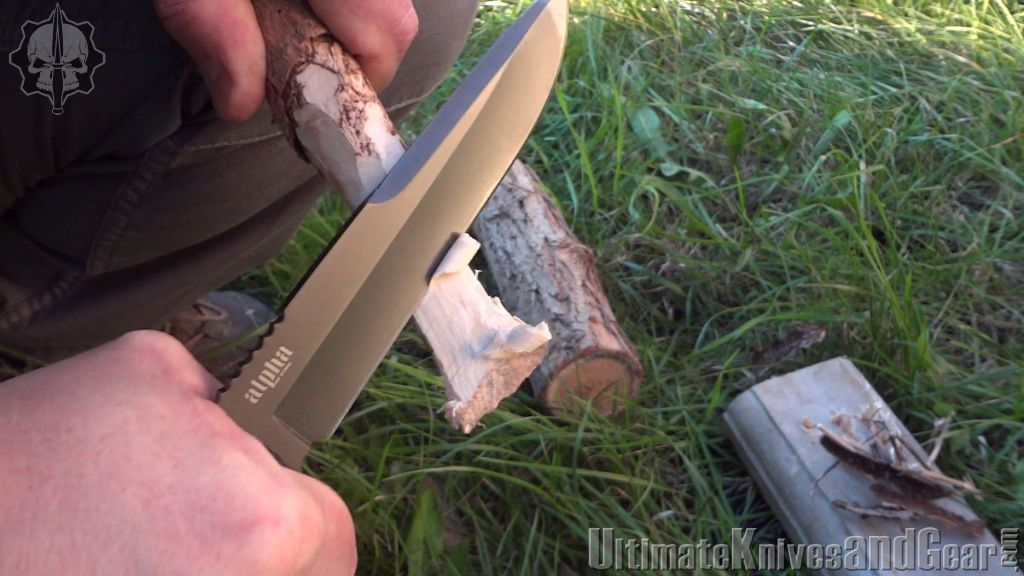 The change of the handle materials has proven to be successful, allowing easy and comfortable use of the knife, without the eventual problems related to the intrinsic properties of kraton polymeric material (in particular its physical aging when exposed to determined conditions and solvents). 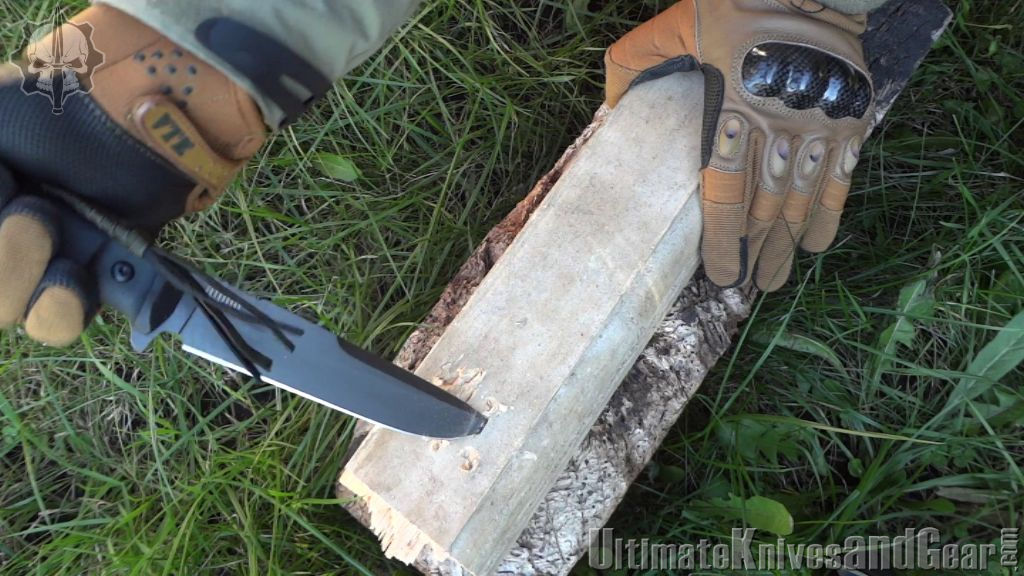 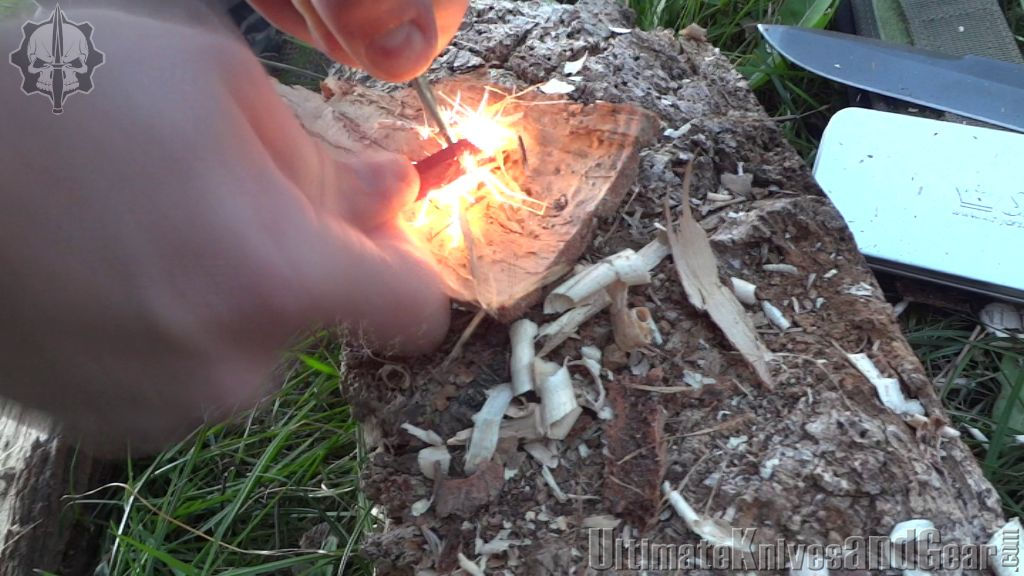 Since this knife has a narrow blade (with a width of 3 cm), it clearly cannot be used for all camp purposes, but it remains a versatile tactical knife for general purposes.
Globally the Alpha is a product made with good quality materials combined with a design without frills and extreme usability, according to the pragmatic philosophy to which the Russian company has accustomed us.

This review has been published on the magazine "Armi&Balistica" n.37