Unfortunately, also in the world of blades, there is the counterfeit market of main brands knives.
Generally these fakes are being offered on Chinese online stores, but also on several online stores apparently beyond suspicion.
As a first suggestion you have to be wary of products sold at excessively low prices, in addition, if the seller does not guarantee the authenticity of the knife, it is better to look more closely at every detail of the product, comparing them with the photos of original products that are always on producers offical websites.
Unfortunately, it is becoming increasingly difficult to distinguish original products from fakes, because in the latter are given false information - written on blades or packaging - about places of production (although the fake knives are made in China - and Asia in general - they are marked with the place of production which appears onto original models); it is notice that also fake knives have serial numbers, just like the originals.
Here are some conterfeit knives of prestigious brands. In some cases we make comparison with the original product.

We make an appeal to knives enthusiasts to be careful not to raise the counterfeit market that are hurting honest businesses in favor of those who enrich themselves by doing commercial parasitism by exploiting innovative and inventive efforts of others to gain benefit in a completely illegitimate way. 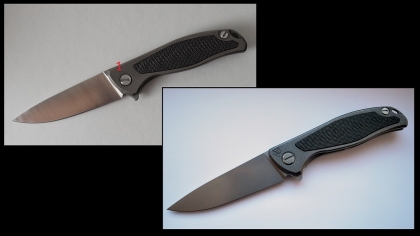 This comparison was made with original F-95 (flipper), with options such as T-pattern, ‘nudist’, and CF inserts.

The aim of this comparison is to demonstrate the most apparent and noticeable differences in the look of similar elements between original Shirogorov knives and counterfeit copies.
The parts of the knife which are being discussed are marked with numbers on the pictures, so it’s easier to follow the text.

Fake Shirogorovs are made pretty much to the same dimensions as the original knives and, at first glance, look fairly similar. The devil, as it often happens, is in the details.
1) Some fakes are missing the Shirogorov logo (the bear) on the front side of the flipper.

2) Likewise, the steel isn’t marked on some of the counterfeit knives 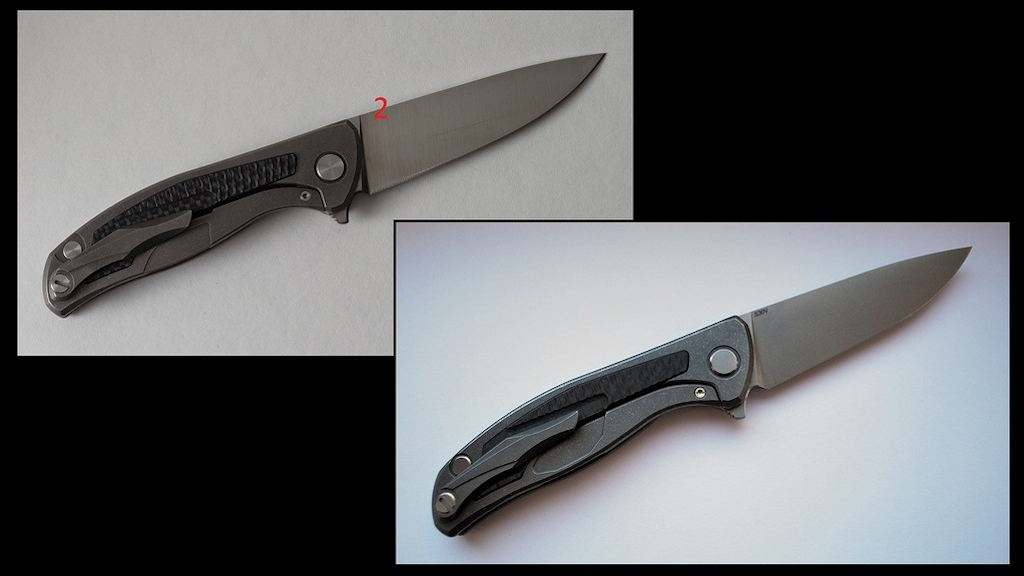 Now let’s take a close look at the technical details.

3) Once the folder is closed, you can clearly see that the fake’s blade is shorter. Fakes often don’t have a centered blade, and usually the grind lines towards the tip of the blade are asymmetrical.
4) The fake’s blade is ground slightly thinner than the original, which is especially noticeable near the tip of the blade.
5) The screw of the fake’s clip is slightly longer than necessary and thus sticks out from the handle. 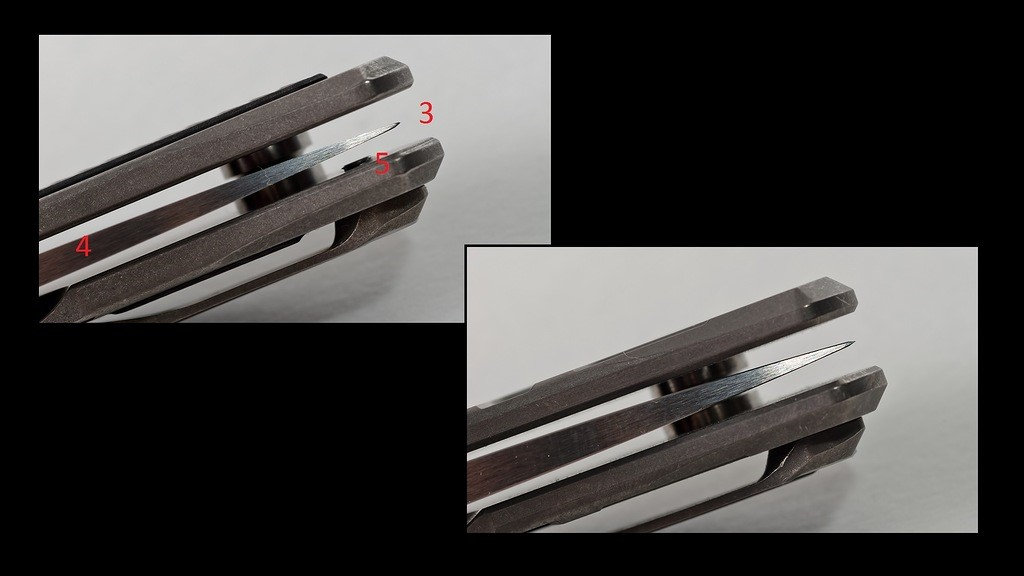 6) The grind is not symmetrical on the counterfeit copy 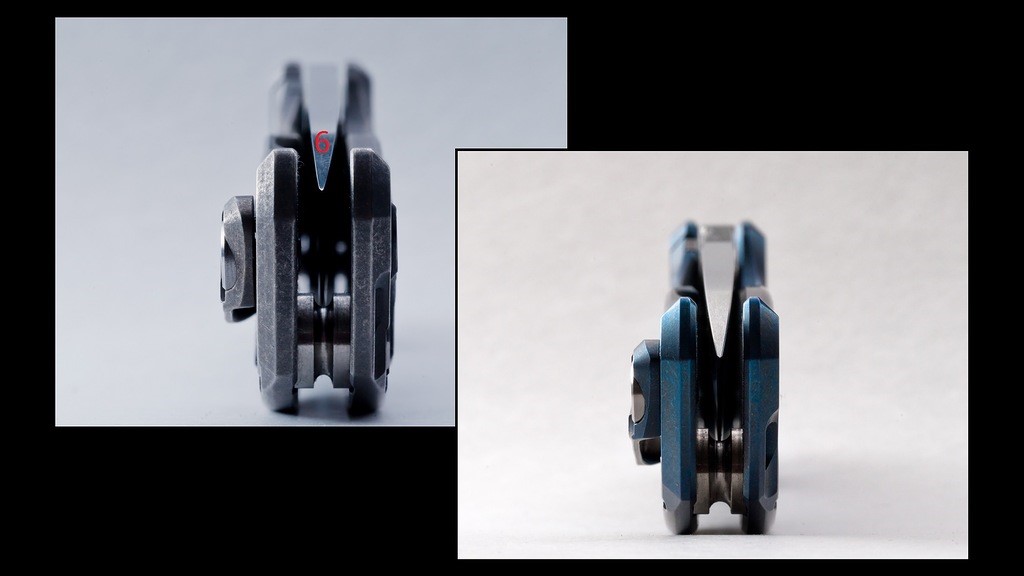 7) The point of contact of the blade with the frame lock does not make a smooth surface, it looks more like it has been dented. 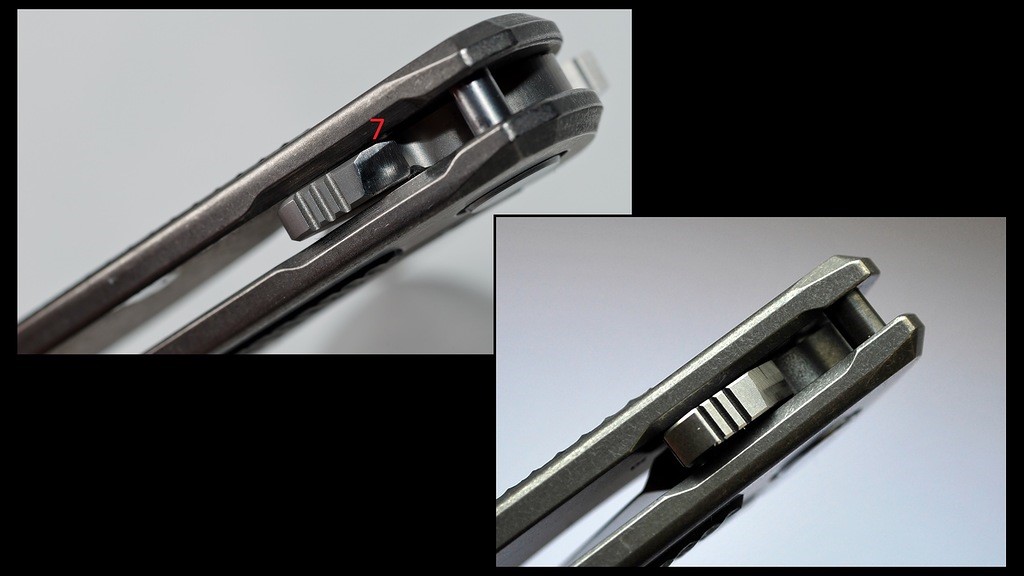 8) Original Shirogorovs have proper faceting (metal removed at the edges of the blade spine at a certain angle so that the edges are not sharp and don’t bite into the user’s hand). The fake has minimal facets which you can hardly feel. 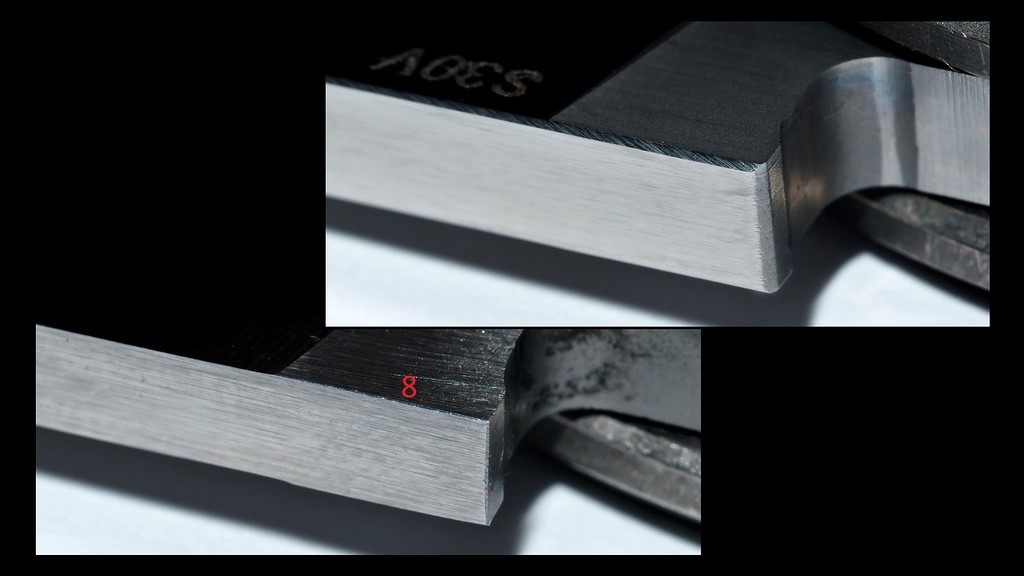 On a fake you can see the following:
9) Asymmetrical flats of the blade
10) The transition from the blade flats to the ‘base’ of the blade is not clearly pronounced, unlike the original Shiro. 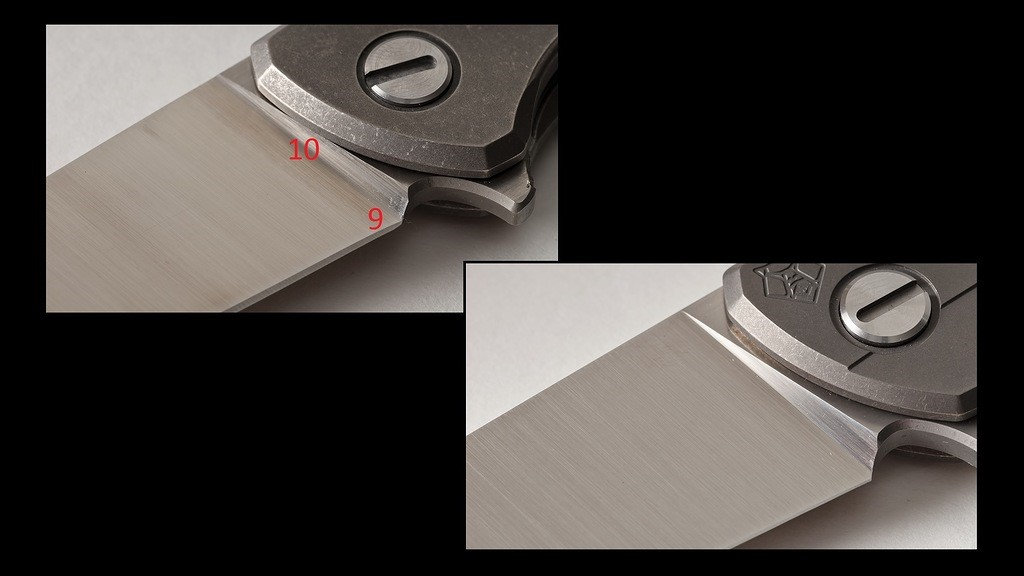 11) From the spine of the blade you can see the beginning of the blade flats (which you can’t see on the original), and the flats themselves are not symmetrical. 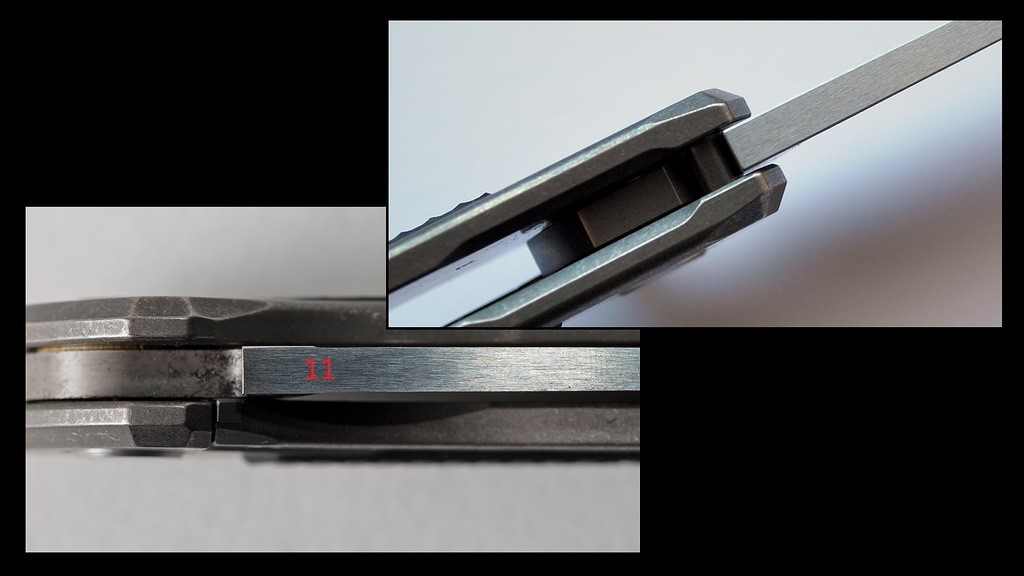 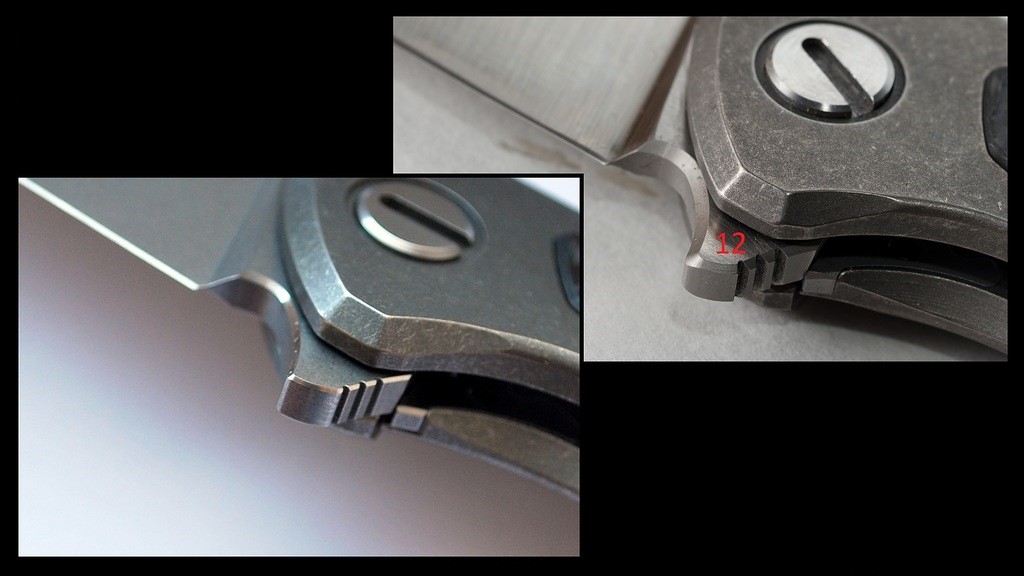 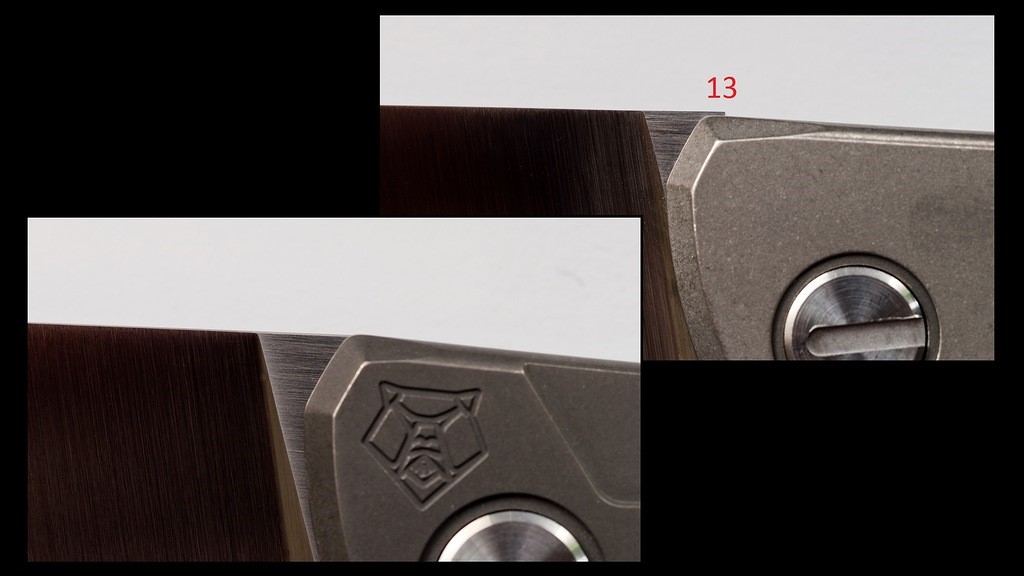 Now let’s look at the handle.
What can be noticed is the rough lines from the grinding belts on titan surfaces:
- the clip (14), 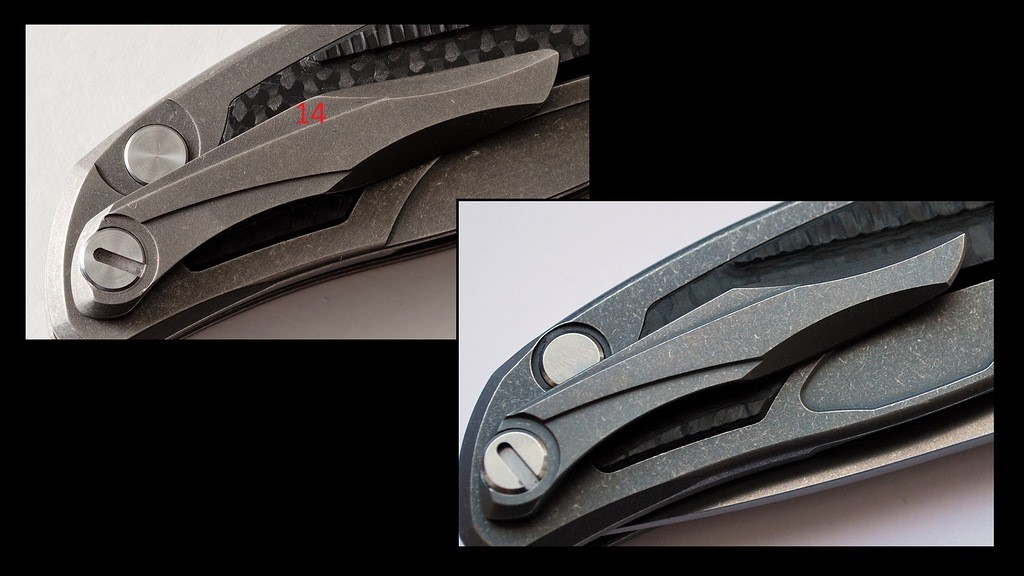 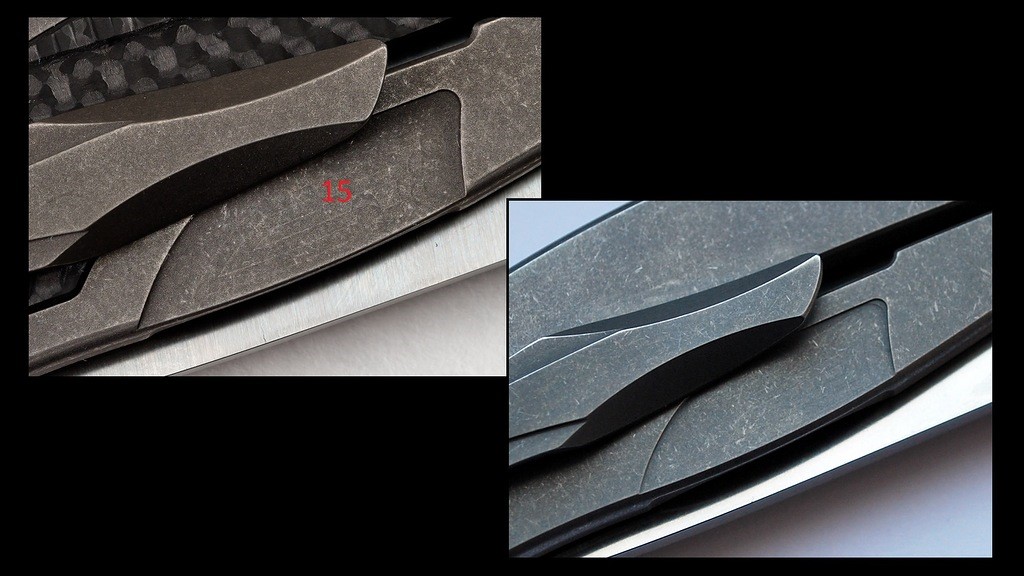 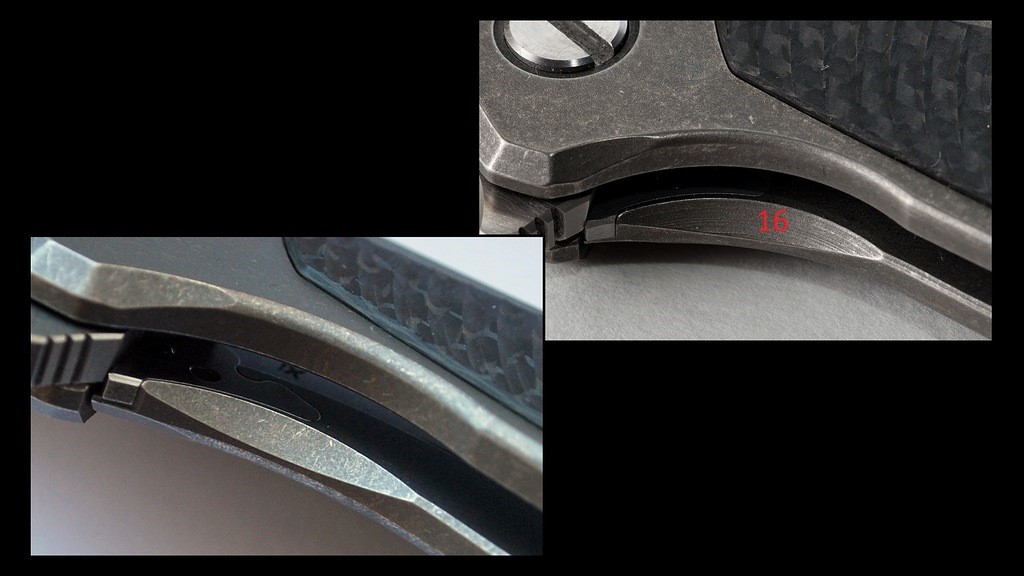 - all over the inner surface of the handle (17) 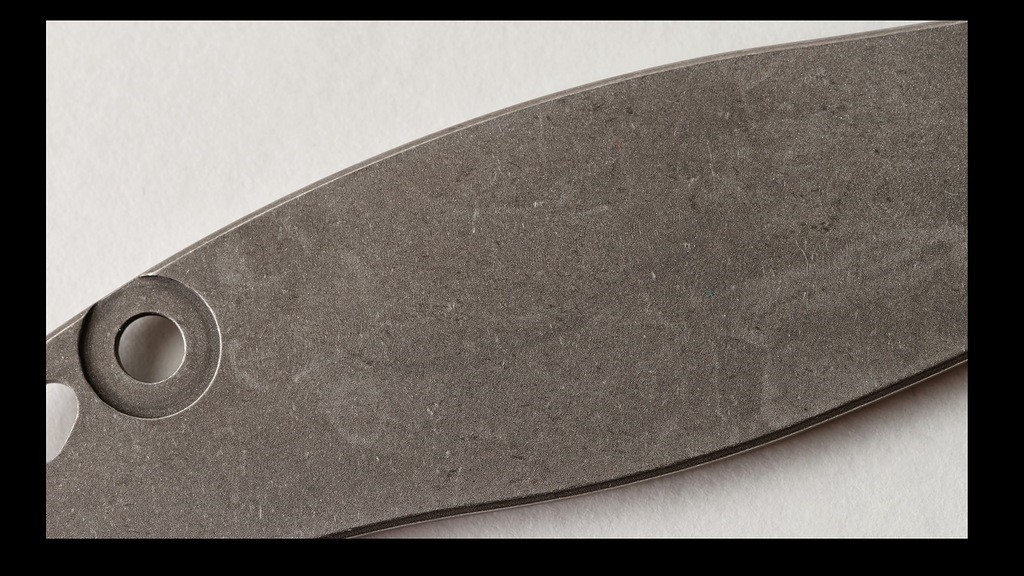 18) Reliefs on the inside of the handles near the flipper tab are uneven and rough (the lines aren’t clear). 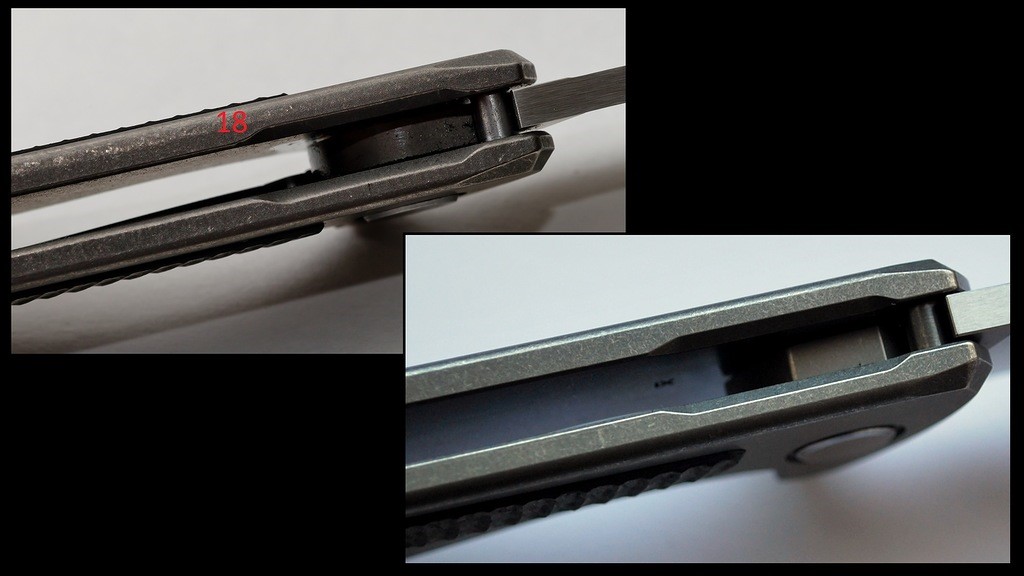 19) The relief milled for the rear standoff doesn’t match the side of the standoff.
20) The axes of both the pivot pin and rear standoff ‘fall through’ by a little bit, and there are gaps in the circumference, which makes for standoff freeplay 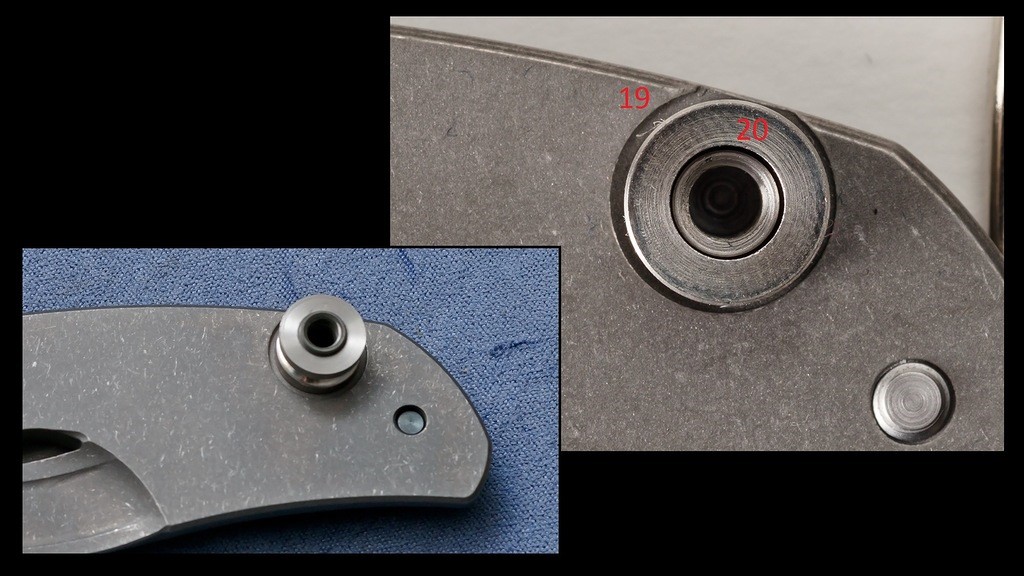 21) Fake screws and standoffs has rough finish and scratches. We have checked their heat treat, and it varies from 45 to 56 HRc. 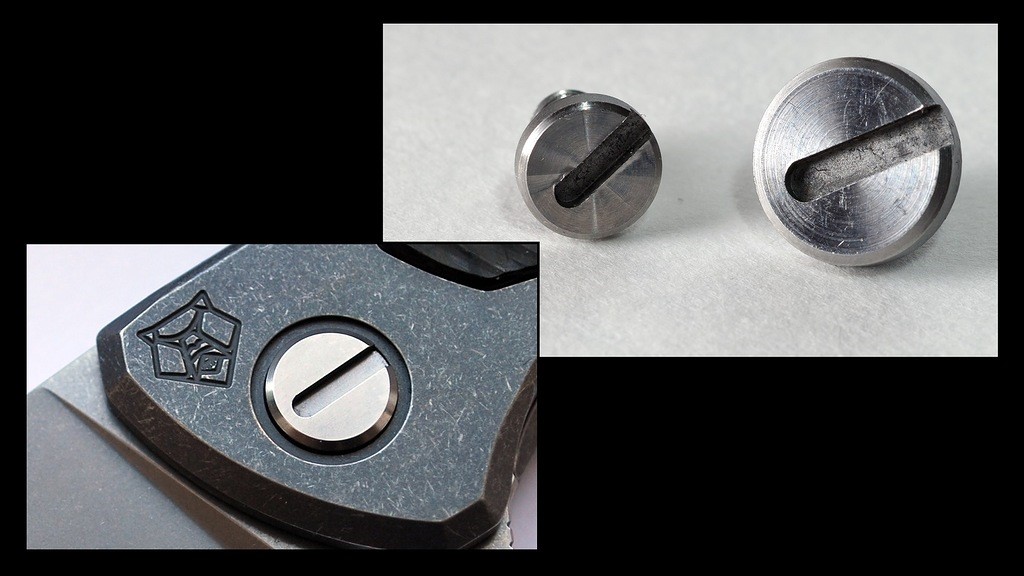 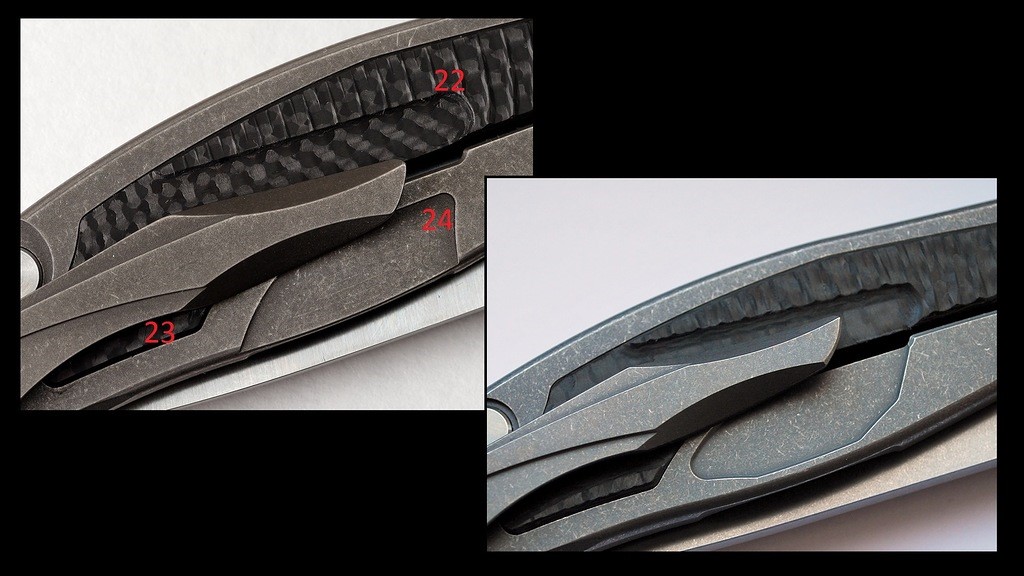 Let’s take the knife apart and look at the pivot area.
25) The knockoff runs on 17 ball bearings per side, just as the original. However, the bearing ring has rougher surface and worse ball fitment than the original. 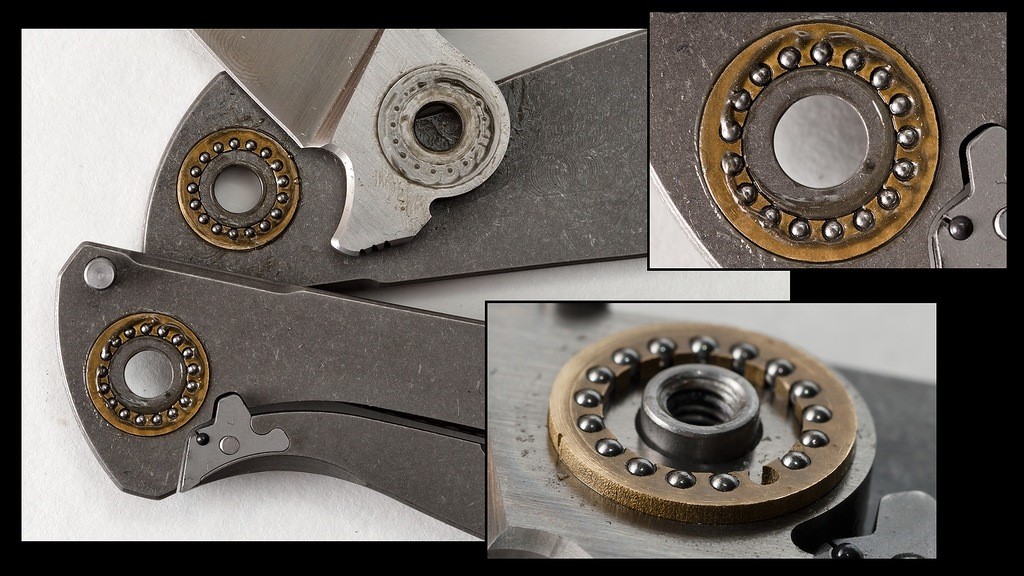 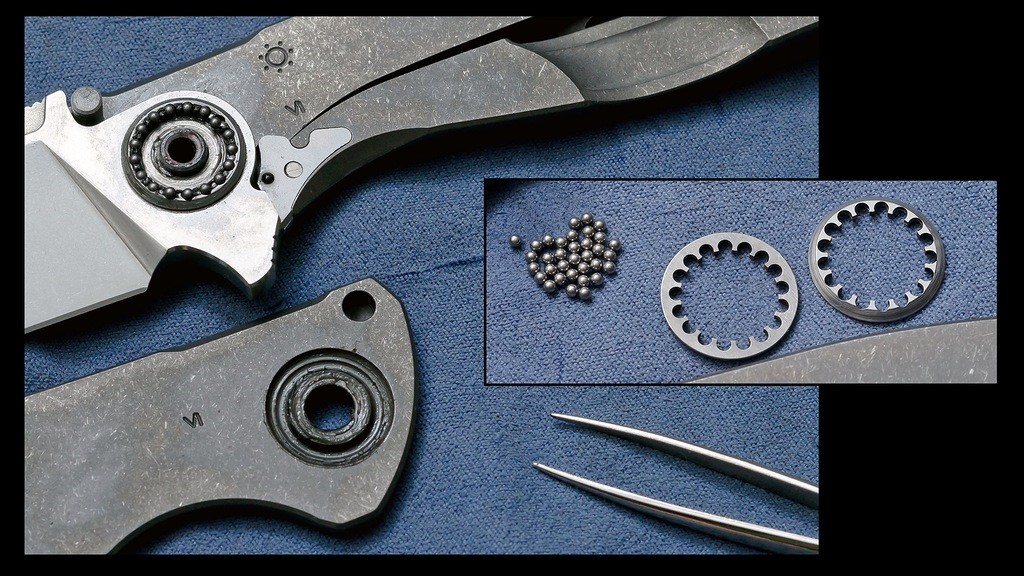 This makes for a worse flip and the feeling that sand has been thrown into the bearings area of the counterfeit copy.

Text and pictures courtesy of Shirogorov