Andrew Jordan is a full time bladesmith for over 20 years, and he comes from a family with an extensive back ground in Craftsmanship /forging in iron and bladesmithing.

His grandfather was a horse Farrier, and during the 1st World War he joined the British Army and because of his orthopedic farrier certification was sent to a cavalry regiment as a farrier.
It was the time of trench warfare, and soon Jordan’s grandfather acknowledged the need for soldiers to have effective trench weapons (compared to the long bayonets with which the Enfields were equipped), hence in his spare time forged trench knives for the men in his regiment, then they were properly equipped with necessary tools.

So Andrew started is journey in bladesmithing in 1967; after some years he was accepted as student by a Japanese Swordsmith - Mukansa - and he went to Japan for two years to learn Japanese Sword making . After this, 22 years ago, he won the American Bladesmithing scholarship to the ABS school in HOPE Arkansas USA , in the basic bladesmithing course. Here he was taught by Rob Hudson, a very well respected Bladesmith. Mr Hudson on the lunch break during the first day of lesson came up to Andrew and said: “Why are you here ? I’ve been watching you ! Who trained you ? Your hand hammer rhythm and precision is beautiful to watch . You control your fire very well . Your movement shows a great deal of skill and understanding . I cannot teach you anything about how to forge a Blade that you don’t know already know".

Later in the Paris show Andrew met Daryl Meier who some say is the father of modern Pattern welding. After some talks over coffee at the Paris show, he said that he wanted to teach him. This is where Andrew learned from one of the greatest Blacksmiths / Bladesmiths all the techniques of Pattern welding. Andrew says: "I was very lucky to have been taught by what I understand to be a Living national treasure “

Andrew Jordan has also a Degree in Industrial design, and when he talks about his creations, he says:

“I make everything myself by hand using traditional time honored techniques from both Blacksmithing and bladesmithing to create my work as a FUNCTIONAL ARTIST”.

For his creations he often uses laminated pattern weld. He also used D2 and Becut steels, but mostly he uses Carbon steels for pattern welding.
This skilled craftsman is able to make any type of blades, from art knives and performance knives to swords. Its official website is full of information and photo galleries on its 22 years of activity.

Sacrifice and dedication, but also knowledge and skill are part of the story of Andrew Jordan, who with perseverance and determination has carried on his family tradition and the eternal art of bladesmithing.
For us at UKG it is an honor and a pleasure to be able to host on our website a knife maker with such a rich history and skills, as Mr Andrew Jordan. 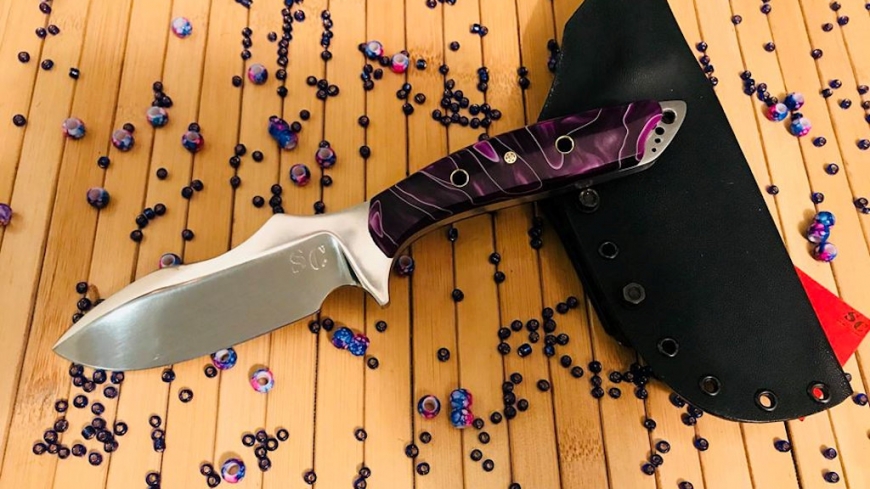