The latest Spyderco's product, created by Eric Glesser, son of the owner of the famous company of Golden (Colorado, USA), was presented as a prototype in March 2013 and became available on the market in 2014.

The Domino contains many features which are sought after by fans of EDC folding knives: flipper opening system, frame-lock together with a smooth rotation of the blade due to the presence of ball bearing washers.
The name of the knife has clearly been inspired by the Chinese domino tiles. These were once used as a tool for predicting the future and then, in time, became a board game. This form of entertainment, which was originally practiced differently from the current version, was introduced in Europe around the 18th century, and its name derives from the Latin dominus, translatable into chief, king, master, sir, Lord.

The Spyderco's Domino, depicted on the cover of the 2014 catalogue as a top product, is characterized by a blade of 80 mm length and 3 mm thick, made with full-flat grind and with the classical leaf shaped blade.This design, developed and perfected by Spyderco, makes the knife very versatile for a variety of applications. 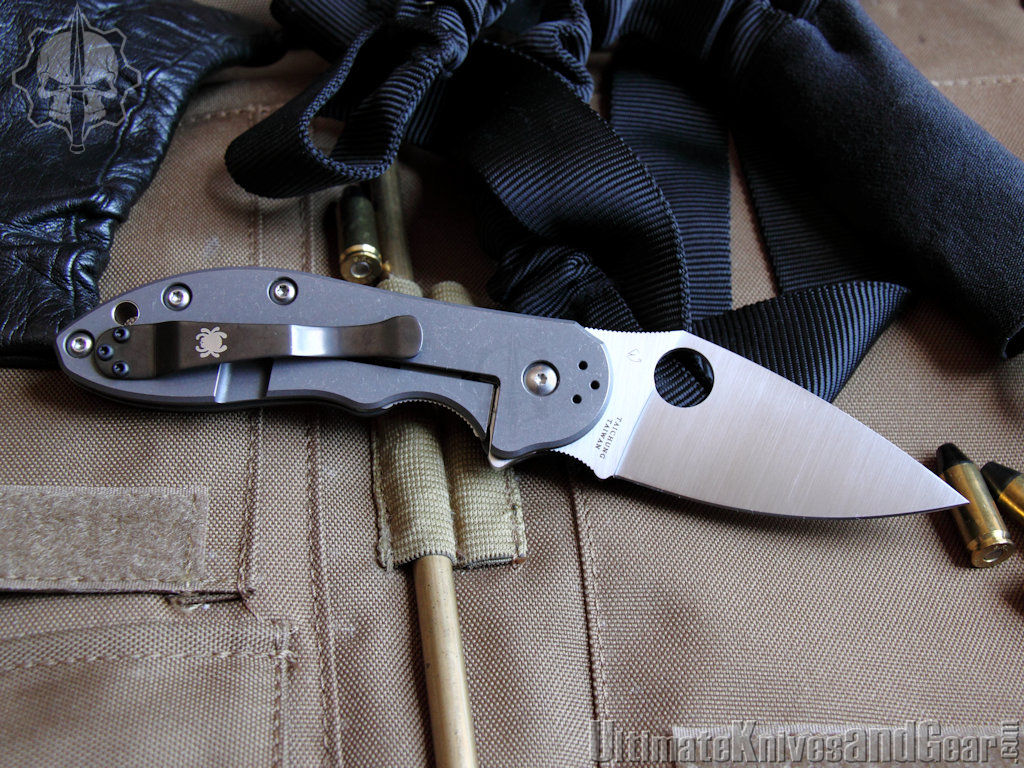 On the spine of the blade there is a pleasant jimping for thumb positioning. This guarantees a comfortable grip of the knife and the ability to be more dextrous for operations that require greater precision or energy.
The steel used is the CTS-XHP, a Carpenter's special alloy, made by powder metallurgy (sintering). It is an alloy with a high content of carbon and chromium that has excellent edge retention, a corrosion resistance equivalent to that of 440C but it can attain a maximum hardness of 64 HRC, approaching that of D2 tool steel .

The Domino is the second Spyderco folding knife to feature the practical flipper opening system, inspired by the one made by Kit Carson. This configuration allows the knife to open in a speedy and simple way. It can be operated with one hand thanks to the guard - protruding from the handle when the blade is closed - that is used to unlock the blade.
In addition to the flipper opener you can, of course, open the knife through the Spyderco Trademark Round Hole ™, the patented circular hole that makes it possible to distinguish immediately all of this company's products. 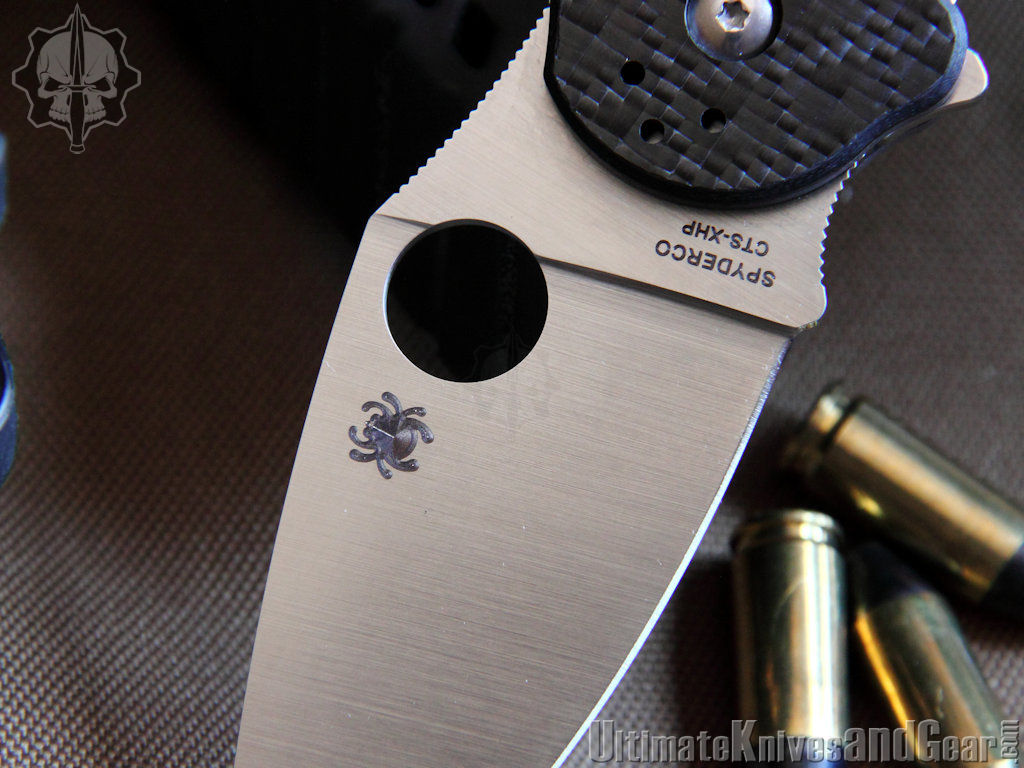 The blade opening is surprisingly smooth, thanks to the replacement of traditional washers with specially designed ball bearings . This technological innovation, recently introduced in most valuable folding knives, drastically reduces the friction of the moving parts. 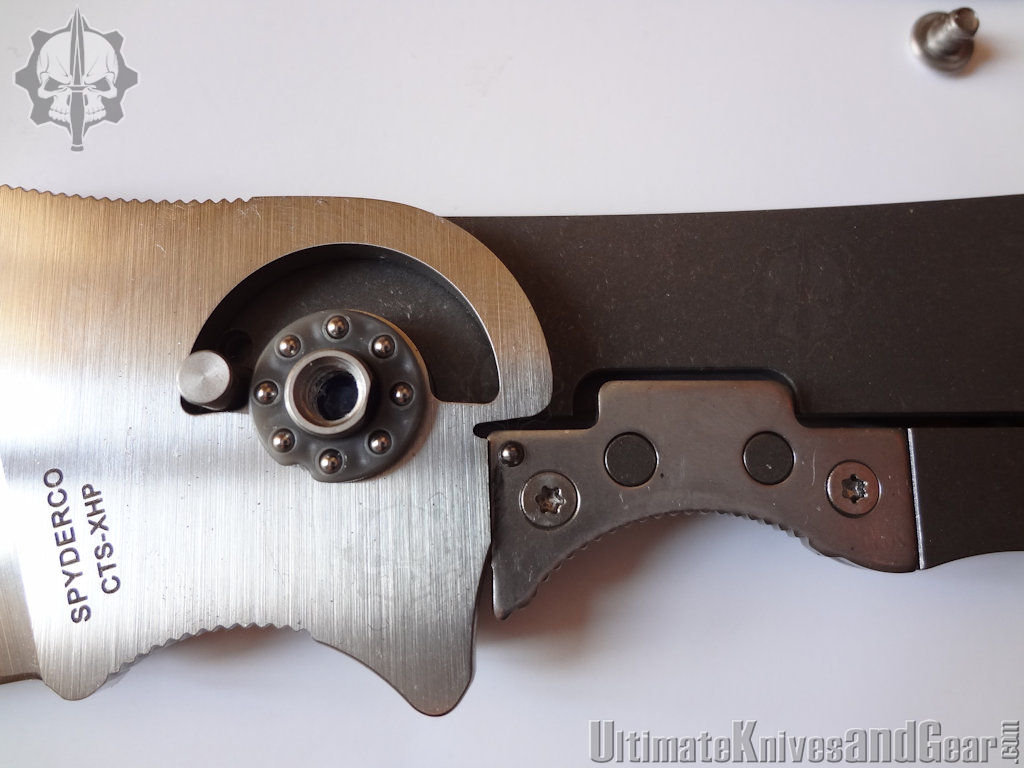 The Reeve Integral Lock - RIL- mechanism (named after the inventor Chris Reeve), commonly referred to as frame-lock, is made by an integral titanium frame and ensures a high resistance to the blade stuck open; in addition a steel insert has been applied to the frame that serves as an interface with the locking mechanism. This solution, mechanically very good, was conceived because the titanium alloys have a significantly lower hardness than steel (HRC 30-36 of titanium alloys, compared to 54-60 HRC of steels), so in the absence of the insert described above, the titanium would be damaged in a relatively short time and it would not guarantee an adequate level of security of the knife.
All joining of materials are manufactured with extreme precision, and the blade in opened position is welded and there is no play.
The steel insert placed on the frame has also been gently knurled to facilitate the grip on the frame.This has been made in such a way so that, with respect to the profile of the grip, it protrudes just enough to allow the unlocking of the blade easily. 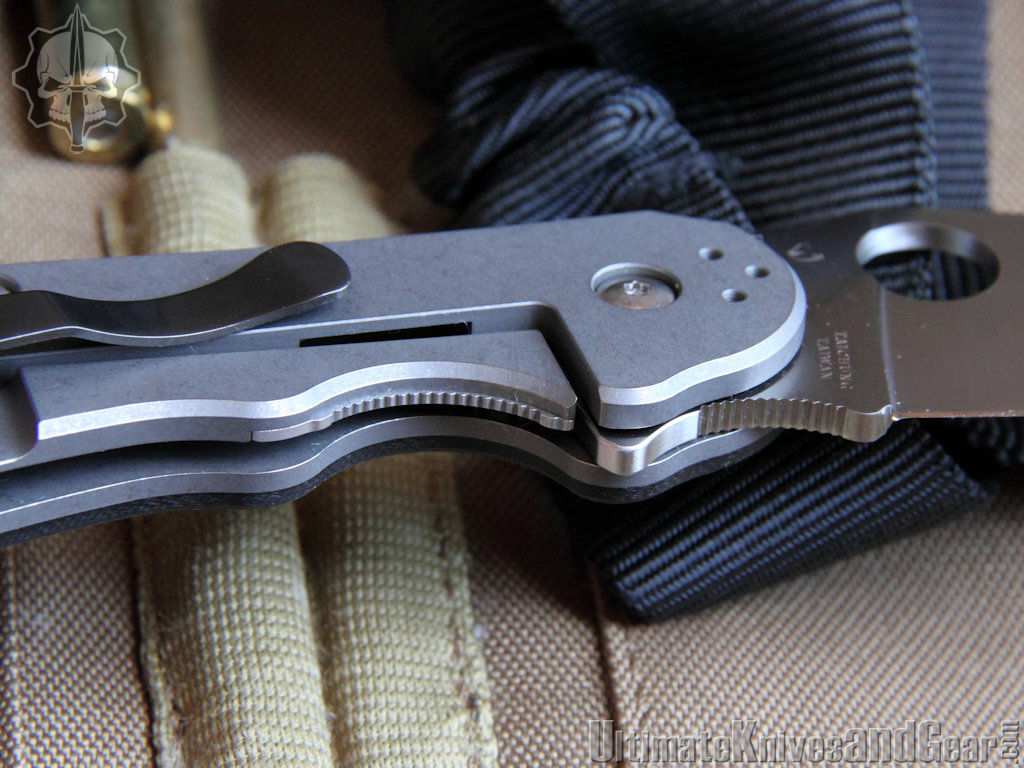 The handle is made on one side with a sturdy stonewashed titanium frame, and on the other side with a relatively thinner liner, also made of titanium, on which has been applied a scale made of carbon fiber laminated - black G10 (a composite material made of fiber glass and epoxy resin), which has a very original cubic texture. 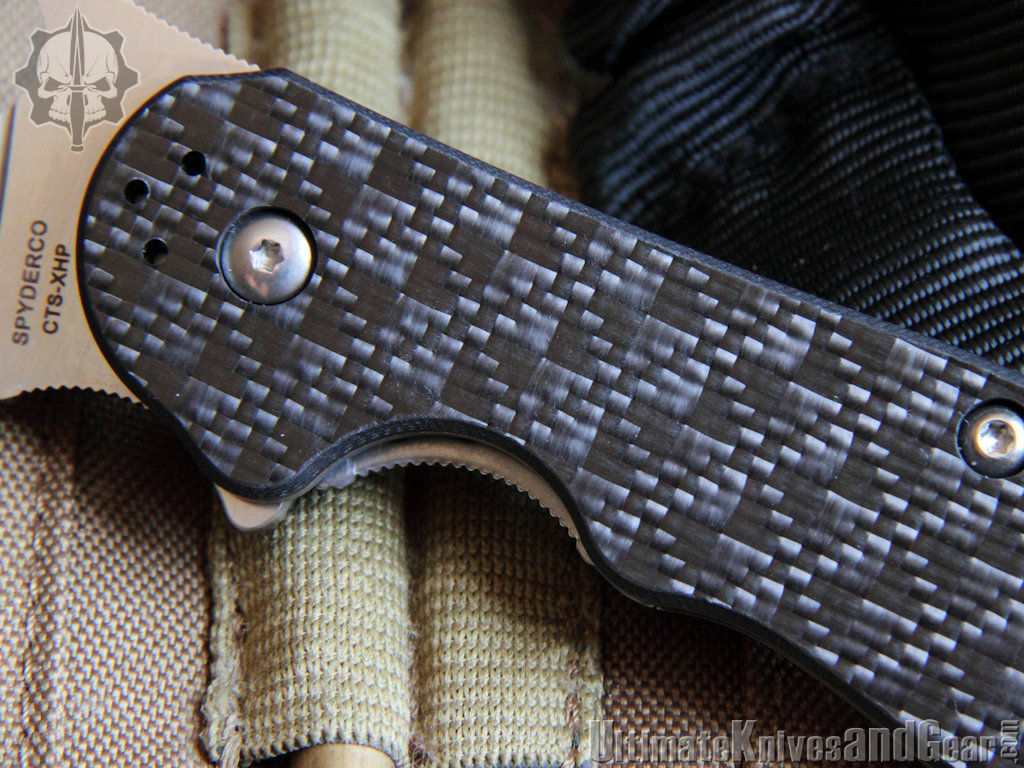 This choice in the combination of the two materials is probably a compromise between the aesthetic factor that the carbon fiber manages to give the composite material, and the economic factor.
The use of G10 material, in fact, reduces in most reasonable way as possible the total price of the product.
Someone argues that the choice of this material is also due to a mechanical factor as the carbon fiber is lightweight and durable but, with the same thickness, is stiffer and harder than the G10, so - in principle – the carbon fiber has a greater fragility and a lower impact resistance than G10.
Evidently, however, it was not taken into consideration the fact that the scale is housed on a titanium liner and therefore the stresses to which it is subjected are not so prohibitive as to justify the choice of one material rather than another.

From an ergonomic standpoint the handle nicely fills the palm of the hand, allowing a secure grip on the knife, thanks to the two finger grooves (both with knurl) that allow more options for finger placement.
The handle is provided with a lanyard hole, inside of which is placed a steel insert, demonstrating the attention to detail that the Company has used in this product, but especially in view of the duration of each individual component of the knife.
Generally the folding knife handles are always a compromise between ergonomics, aesthetics and usability. With the Domino, Spyderco has succeeded brilliantly in creating a product that encompasses all of these qualities and that can also be used for much harder usage.
For this reason, the Domino has been selected for the Spyderco professional series OpFocus; indeed it belongs to this line of products which are chosen for their tactical relevance for operational use by the military, rescue, police, martial artists, and so on. 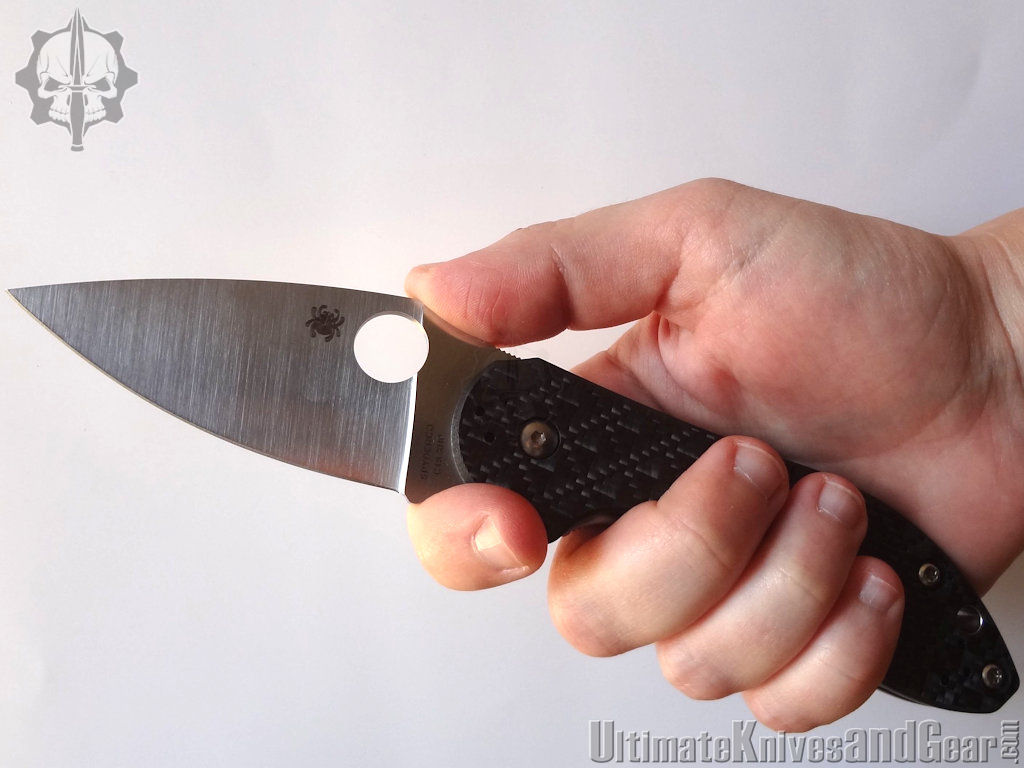 To carry the knife in the best way possible, the Domino comes with a sturdy and functional pocket clip , matte black, that can be placed in 4 configurations (ambidextrous tip-up / tip down). 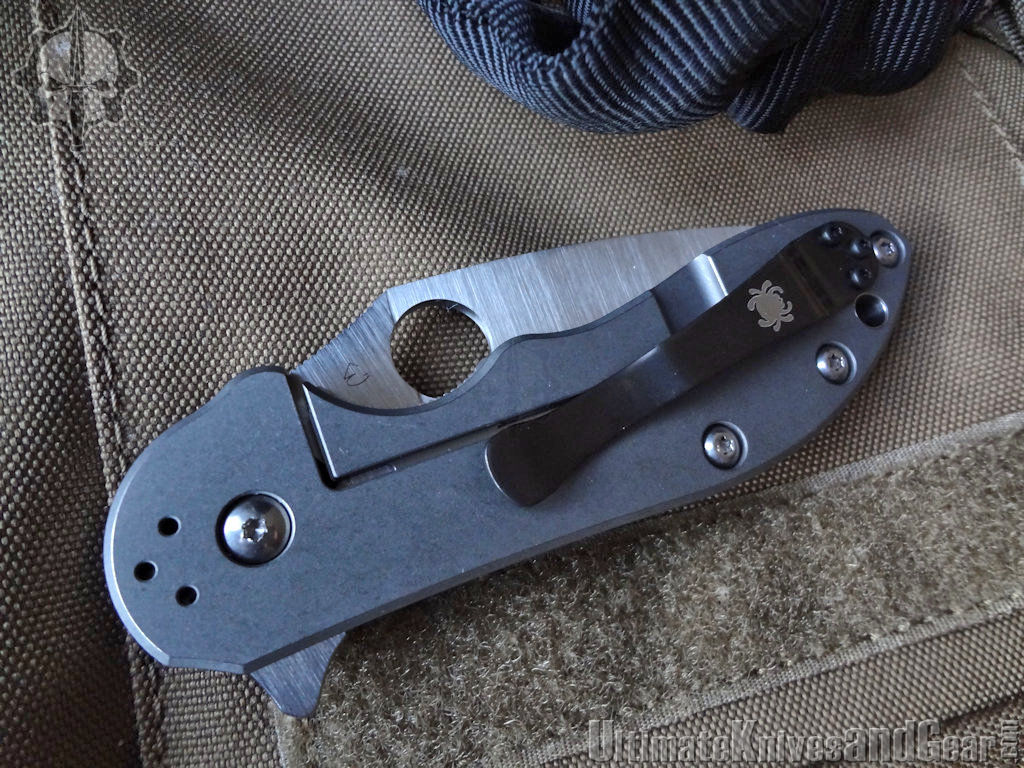 As usual for our qualitative tests, we evaluated blade sharpening with the cutting of a variety of materials (paper, cardboard, paracord, mooring ropes and car safety belts). The industrial sharpener made by Spyderco, for the same geometry of the blade, has few rivals in the global market of knives; out of the box the Domino cuts like a razor.

The flipper opening system is definitely a strong point of attraction for knife enthusiasts and users; they know how rewarding and profitable it can be to quickly and easily extract the blade in any situation and with one hand.
Despite the generous dimensions for an EDC, the Domino is relatively thin and light, to the point of not being too annoying in your pocket.
It includes many features sought in a folding knife with a level of design and finishes that have few rivals in the knife industry with a more than reasonable price. In fact, the price suggested by Spyderco is U.S. $ 340 , but is easily found online at less than U.S. $ 200.
We therefore have to evaluate the Domino as a product made with a very good finish, quality materials, best technical solutions, design and usability features that confirm the fame of Spyderco among the best producers in the worldwide knives industry.

This article has been published on the magazine "Armi&Balistica" n.30