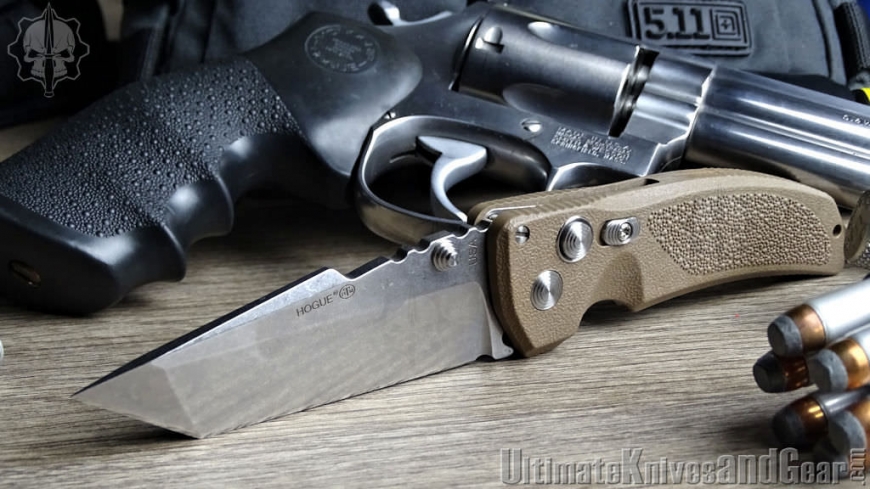 Since its debut in 2010 with the creation of tactical knives and made 100% in the USA, the collaboration between Hogue and Elishewitz immediately gave interesting results which are characterized by original designs and made with quality materials.

Founded in 1968, Hogue, an American company in Paso Robles - California, is best known for the production of aftermarket products for weapons, such as grips for 1911 and other guns, holsters, components for AR and other accessories.
In 2009 they entered the world of knives by starting a collaboration with the famous and award-winning Texan knife maker Allen Elishewitz, with a history as a Recon Marine together with 30 years of experience in martial arts such as Thai Boxing, Okinawan Te, Northern Shaolin and Kali. Elishewitz began his career as a knife maker in 1988, winning numerous awards around the world and entering the American knife makers Guild in 1994.

The knife - object of this review - belongs to the EX-03 series with a tanto profile blade (it is also available in the drop point version), of around 92 mm long and 3.8 mm thick. On the blade spine there is a swedge that resembles a dorsal fin and which characterizes the design of this knife, making it more enjoyable than the americanized tanto profile. 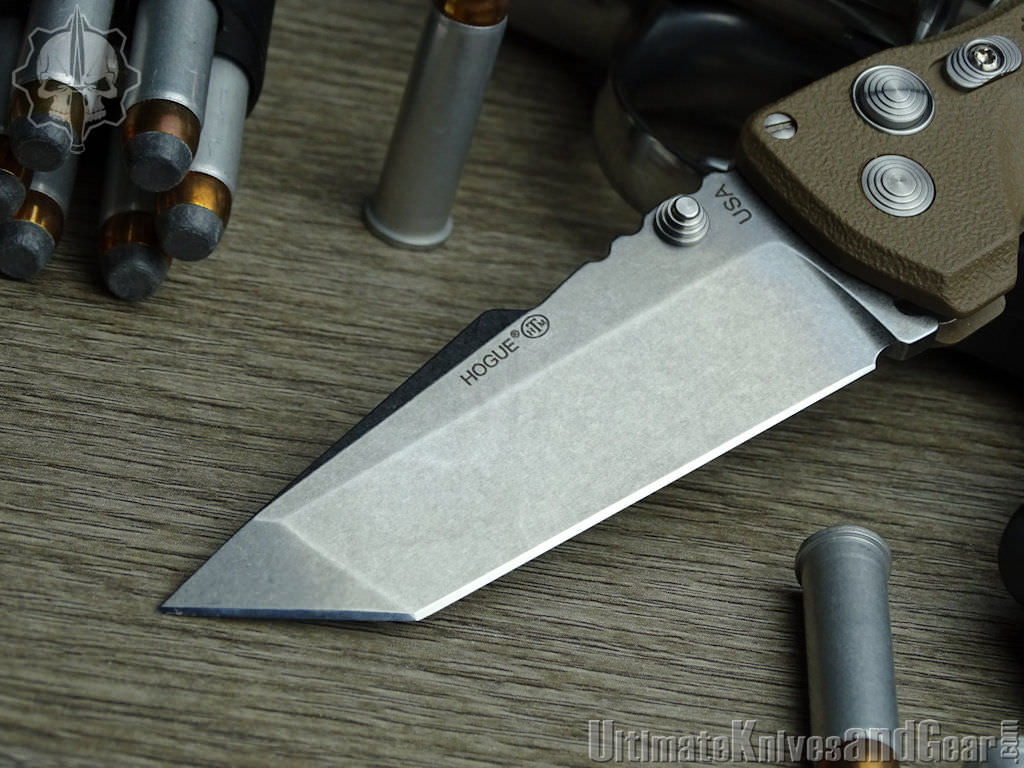 The steel used is 154 CM, cryogenically treated and hardened to 57-59 HRC, with a lovely stone-washed finish. The blade is provided with an ambidextrous thumb-stud and on the spine with a thick jimping. The blade abuts in opening phase on the stop pin, the only pin visible on the monolithic handle. 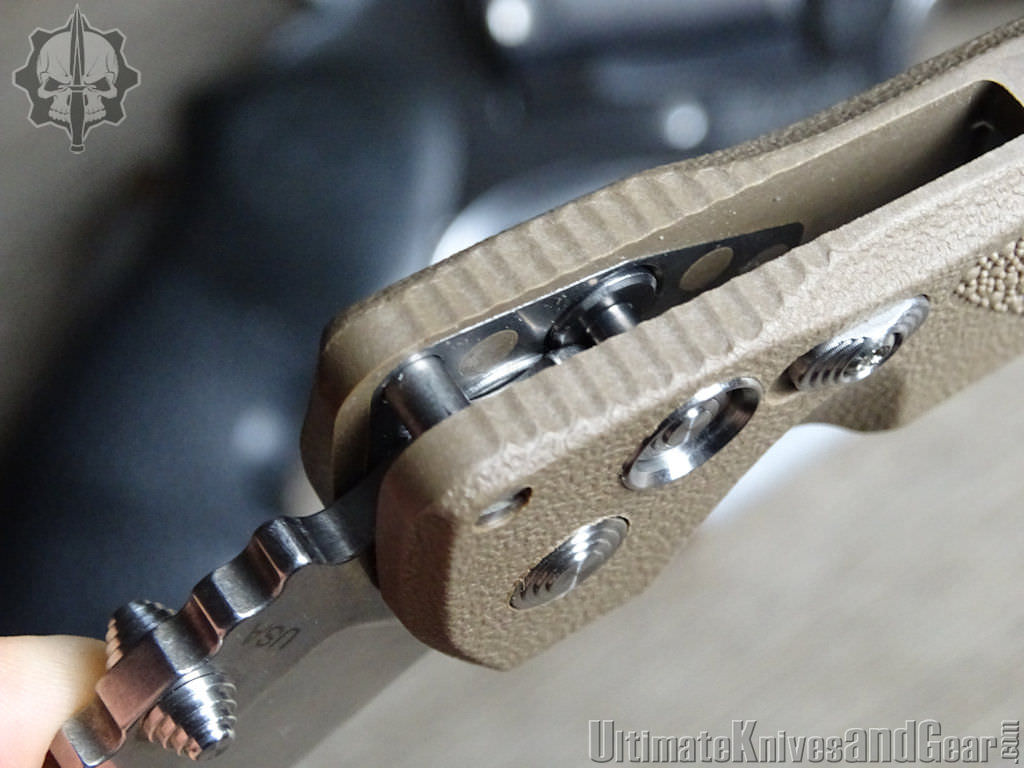 The locking mechanism is a button-lock type, with an additional safety system of a manual cursor to prevent accidental release during use (the safety is not operable with closed knife). On the upper part of the blade tang a recess is present to engage the pin connected to the button; the pin is constituted by two cylinders of different diameters, and pressing the button will cause the pin to slide toward the narrower diameter than the recess on the tang, thus disengaging the blade and allowing the closure. 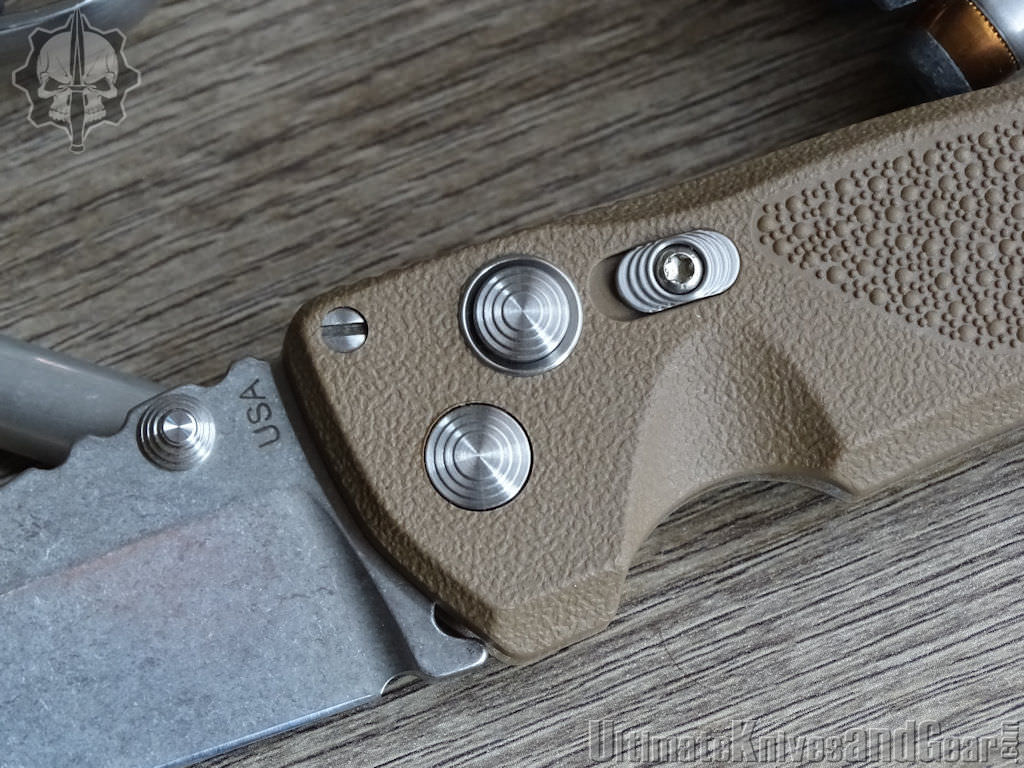 The button locking system, in addition to allowing the closure of the knife with one hand, has the advantage of never allowing fingers to be placed in the path of the blade during the closure. Mechanical couplings of the various parts are made in a workmanlike manner, and blade opening is free of play and firmly locked.
In the lower part of the blade tang has been practiced a circular milling hook, which serves on closing to constrain the blade on the locking pin (the same that acts to open blade) and to avoid the blade that comes out from the handle (this is because, having regard to the mechanics of the knife, the detent ball is not present). The steel plates which structure the locking system are incorporated directly into the body of the handle. 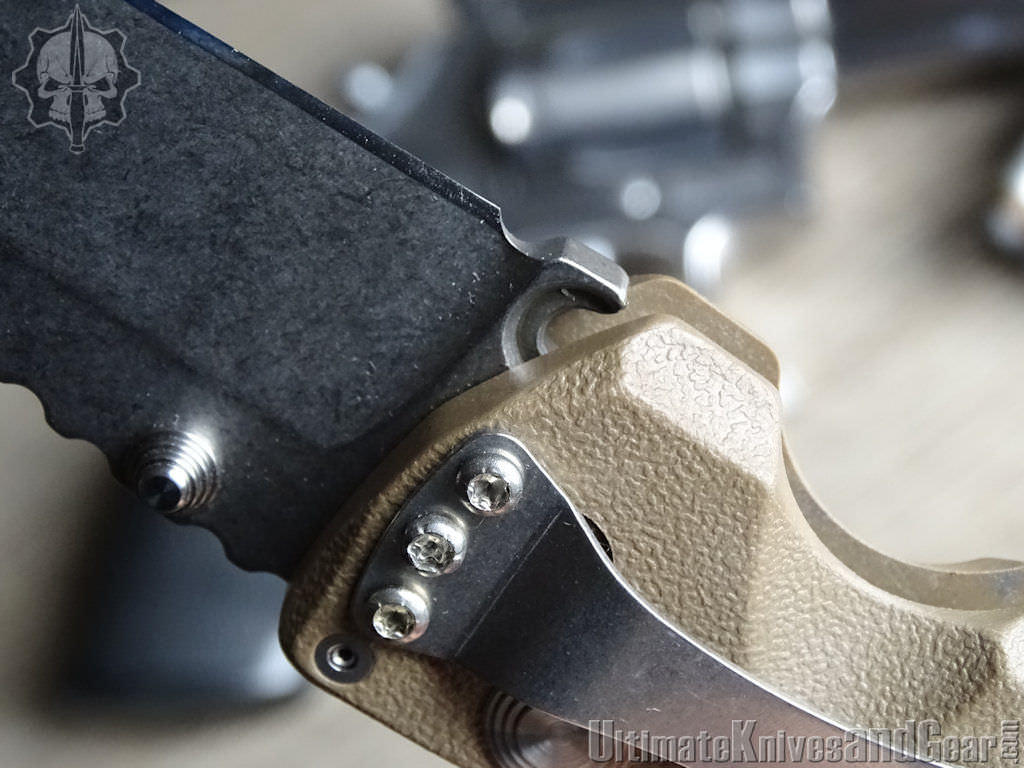 From the design point of view, the release button has a pattern of concentric circles, as well as the main pivot on which the blade rotates(and adjustable from the opposite side by means of torx screw placed under the clip), the cursor of the secure system and the thumb-stud.
The EX-03 series incorporates many of the features of the previous EX-01, with the exception of the handle made of a monolithic body made of PPS reinforced with glass fibers, obtained by injection molding.
Overall, the handle is very well made, durable and also beautiful (the only thing that the more precise people will notice, but it is inevitable from the point of view of construction, is the junction point of the mold). The jimpings are directly made with the mold as well as the bottom pommel, devised for impacts, and it is formed directly on the handle body. From the the ergonomic point of view the handle is well ideated, but by tightening the knife firmly in the hand you may feel a slight discomfort in the fingers caused by a little sharp profile in the opening point of the body which houses the blade. 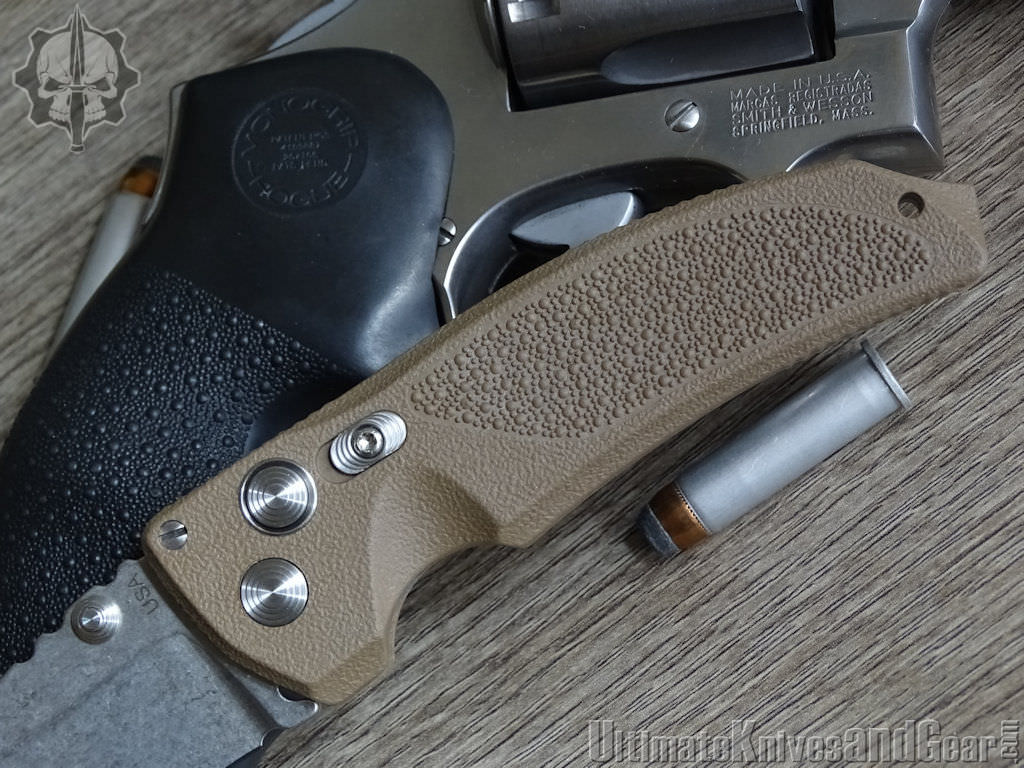 The handle, Flat Dark Earth coloured (but also available in black), is provided with a fine texture on both sides, and with more marked dots (that reminds the memorable Hogue's grip made for the S & W revolvers) made on a portion of the knife handle, to the opposite side of the clip, to improve the grip.

The robust and wide pocket clip on which is engraved Hogue's logo, is made of stainless steel and can be configured in right tip-up or tip-down position, with 3 Torx T8 screws. 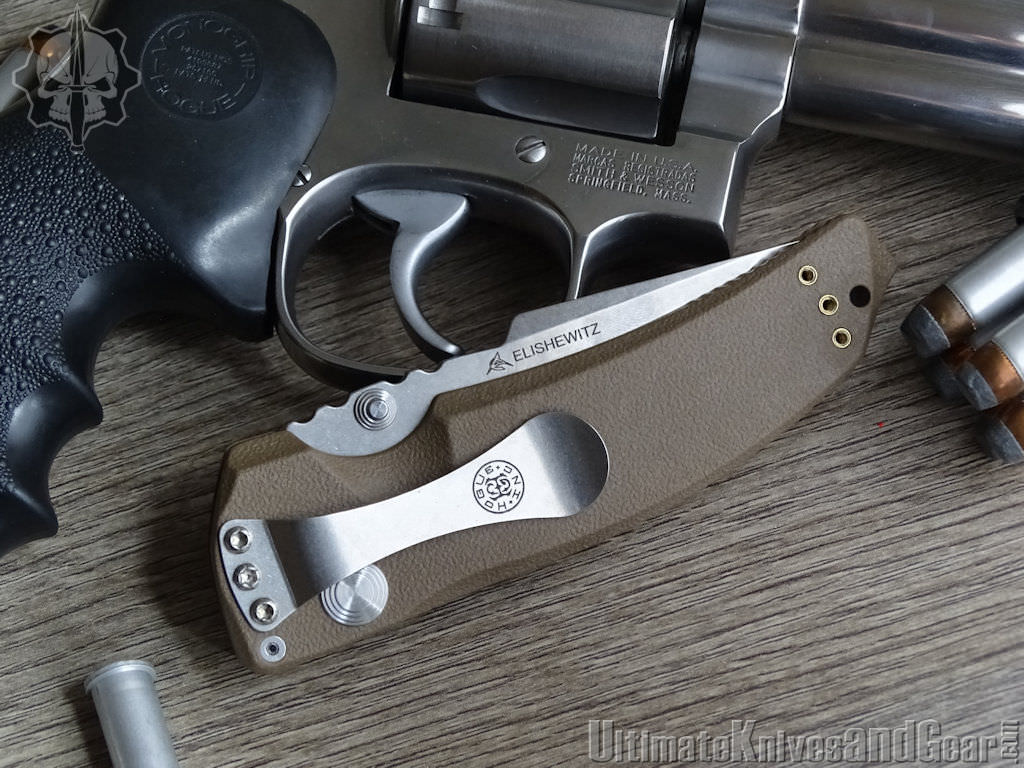 The EX03 has been qualitatively tested on various materials, revealing a very well crafted factory sharpening. Furthermore all Hogue knives have a hand-honed edge, that rarely is seen in industrial production knives.

During the use of the knife, the button lock mechanism has proved to be very comfortable, practical and safe; the knife opening can be made simply by pressing the button that releases the pin on blade tang, as well as through the thumb-stud. 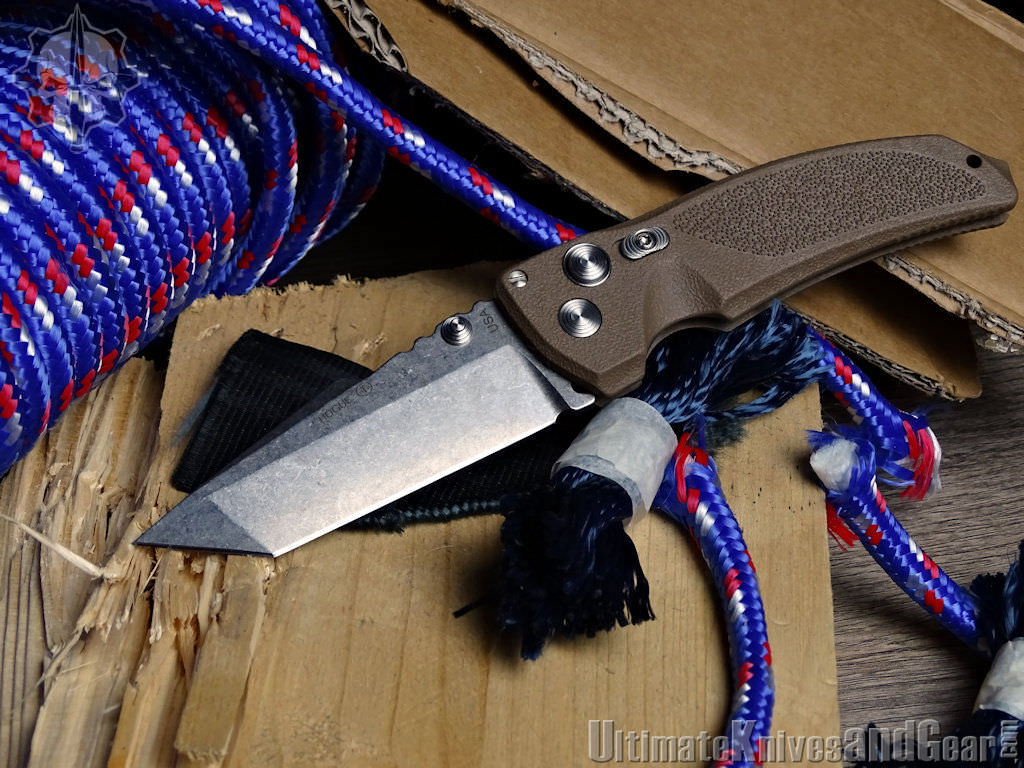 This article has been published on the magazine "Armi&Balistica" n.62