Amongst the most popular gentlemans' knives of the last decade, we cannot help but mention the Leek designed by Ken Onion and produced by Kershaw in over 12 configurations of blade and handle.

Kershaw, a brand of the Kai USA Ltd. group together with Zero Tolerance and Shun Cutlery, was founded in 1974 by Pete Kershaw who left Gerber Knives to launch his own business, which was then acquired in 1977 by the Japanese Kai Group.

Since then the brand has been characterized by research and development, patented technologies and production of quality knives which, over the years, have received numerous awards in the biggest events in the sector. Today Kershaw produces several lines of sporting, tactical, and everyday carry knives, with various price ranges; some products are manufactured in China but many others - including Leek - are 100% made in the USA.

The Leek owes its lasting popularity to the perfect combination of size, weight, material, technology and price, in addition to the renewal of this model that Kershaw introduced in several variants, either by choice of materials and finish (now there are more than 12 possible configurations: from anodized aluminum handles or steel with different surface finishes, blade made of Sandvik 14C28N steel, up to the versions with composite steel).

The Leek at our disposal is the 1660CBBW version with BlackWash® finish and composite blade (patented by Kershaw), formed by the lamination of Swedish Sandvik 14C28N steel outside, and D2 steel on the cutting edge. The advantage of this type of material, in addition to the aesthetic factor, is to combine the properties of two steels to obtain better performance: in this specific case it combines the rust resistance of Sandvik 14C28N and its advantageous quality / price ratio, with the good cutting edge retention of D2 steel. 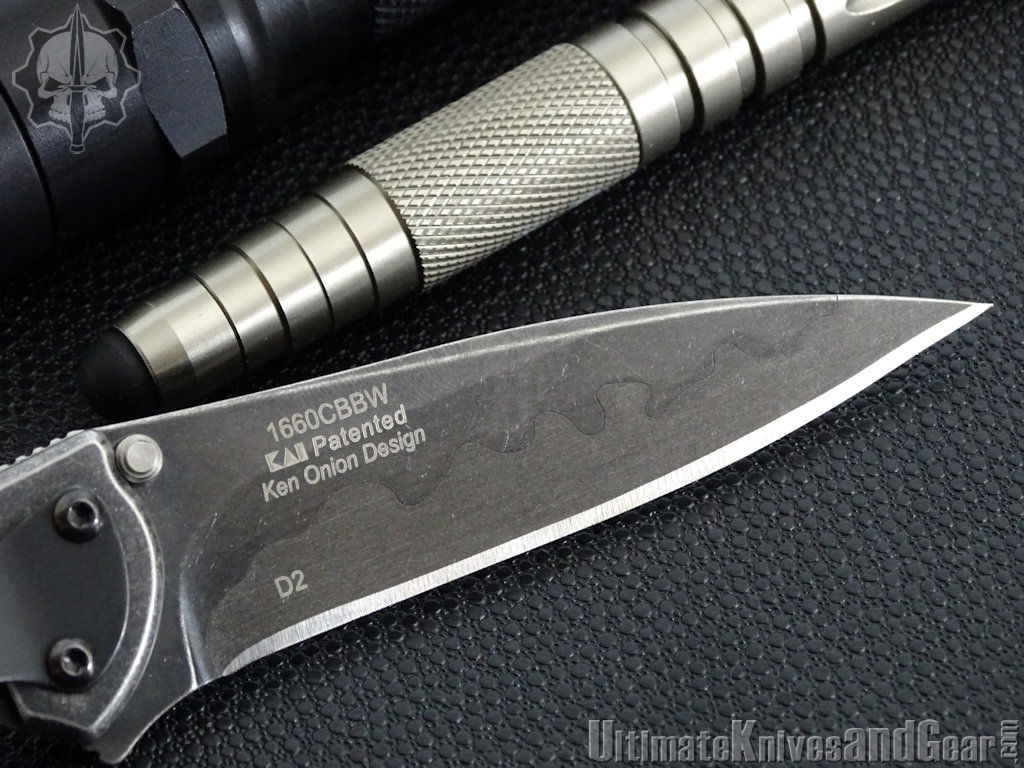 The blade, defined by the manufacturer as "modified drop-point" which would seem to get closer to the Wharncliffe style, is 75 mm long and 2.3 mm thick at ricasso, and ends with a very thin tip from which branches off a swedge that extends for almost the entire length of the blade.

The assisted opening with the patented SPEEDSAFE® technology, also ideated by Ken Onion, allows the blade to open quickly using one hand, simply by pressing the flipper, I.e the tang protrusion on which a practical jimping has been made, or through the ambidextrous thumb-stud, which acts at the same time as stop-pin.

The blade, which rotates on traditional bronze washers, opens by means of a torsion bar which, after the initial resistance, moves along its half-moon track to complete opening.
The locking mechanism is frame-lock type and the flat spring is formed directly on the 2.6 mm thick steel frame; the mechanical couplings are made to perfection and the blade is firmly locked in the open position and has no lateral play. The blade unlocking is facilitated by the quite large recess practiced on the opposite frame in respect of the locking mechanism, making it easy to reach the locking spring despite the compact size of the knife. 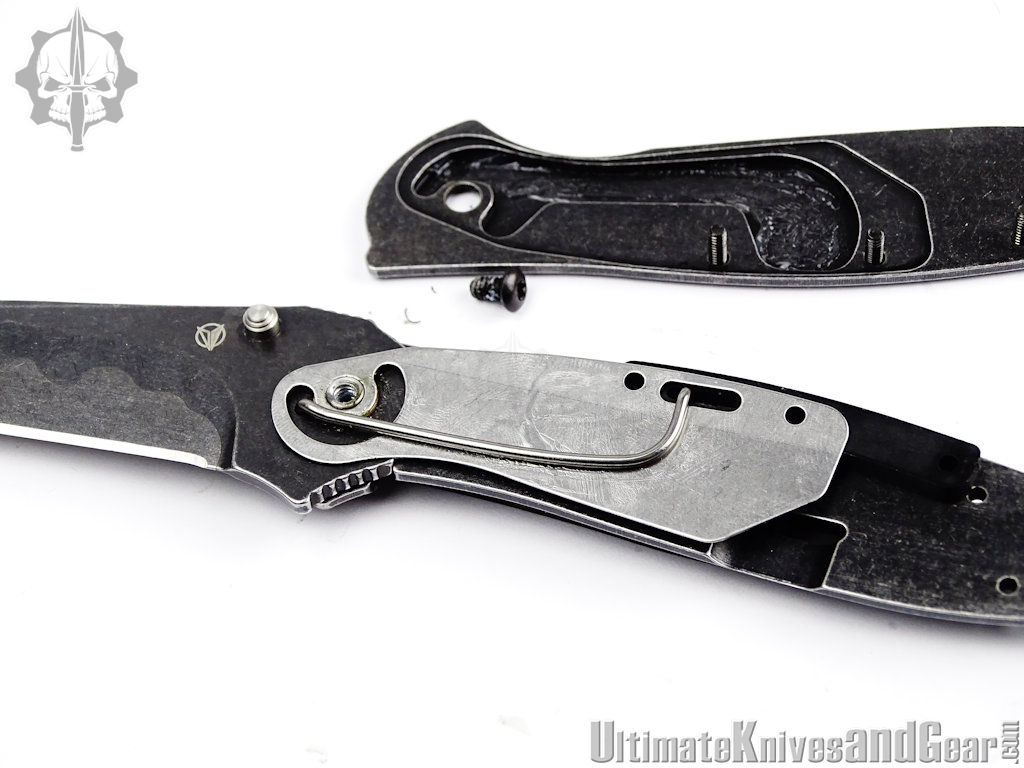 The Leek is also equipped with a Tip-lock slider system, which locks the blade tip in the closed position, preventing the accidental opening of the knife (inside the pocket for example). Unfortunately the locking cursor, not having constraints on its extremities, is fairly mobile and it can happen that the pin moves a bit from the desired position. 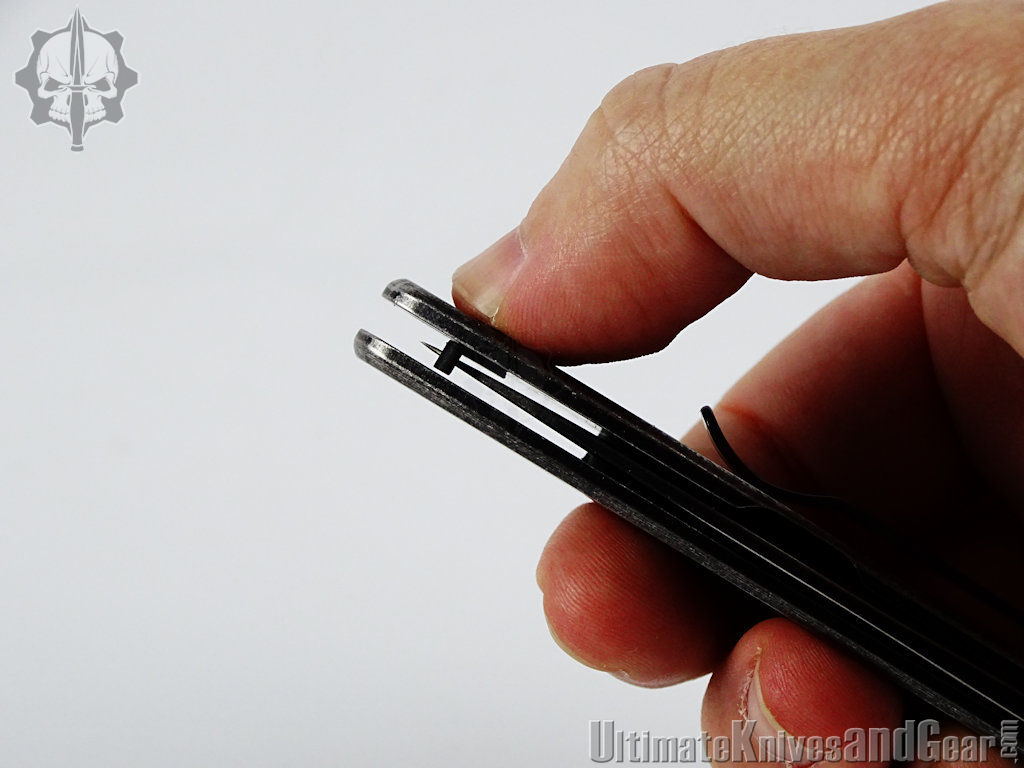 The handle, about 103 mm long and only 8 mm thick, is made of 410 stainless steel with BlackWash® finish that recall that of the blade. From the ergonomic point of view the handle is comfortable for the size of the knife, while a negative factor worth mentioning is certainly the slippery steel devoid of texture. 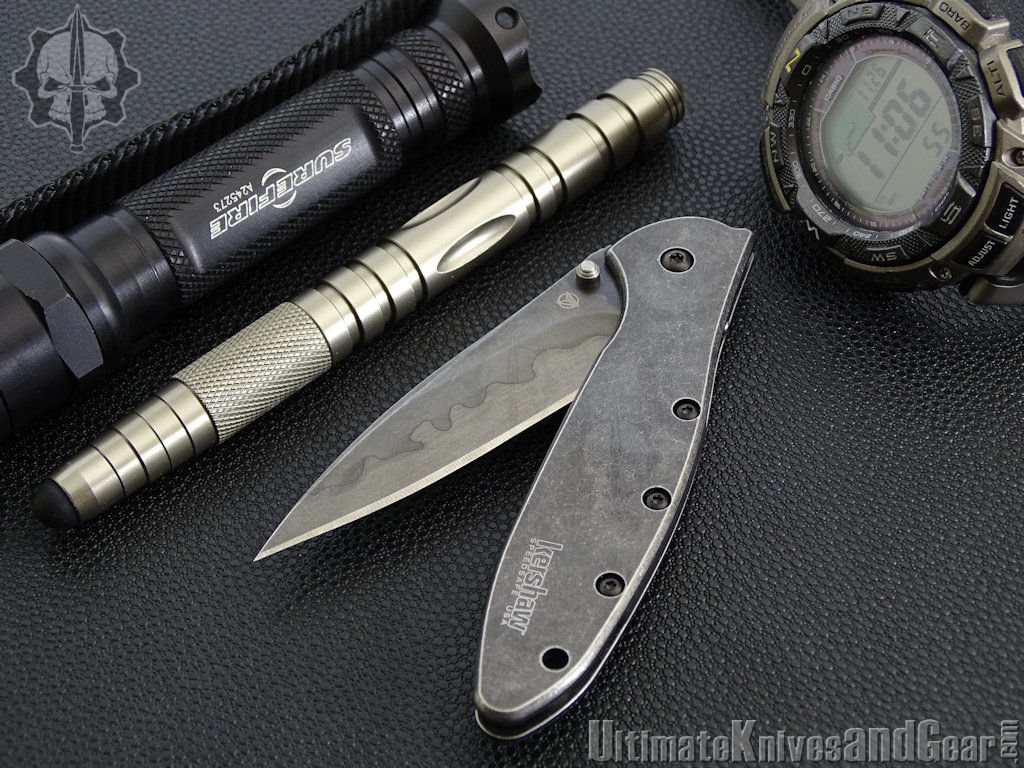 The Leek is equipped with a handy reversible pocket clip (tip-up, tip-down position), not ambidextrous, with engraving above the Kershaw brand, and a hole for lanyard at the bottom of the handle. 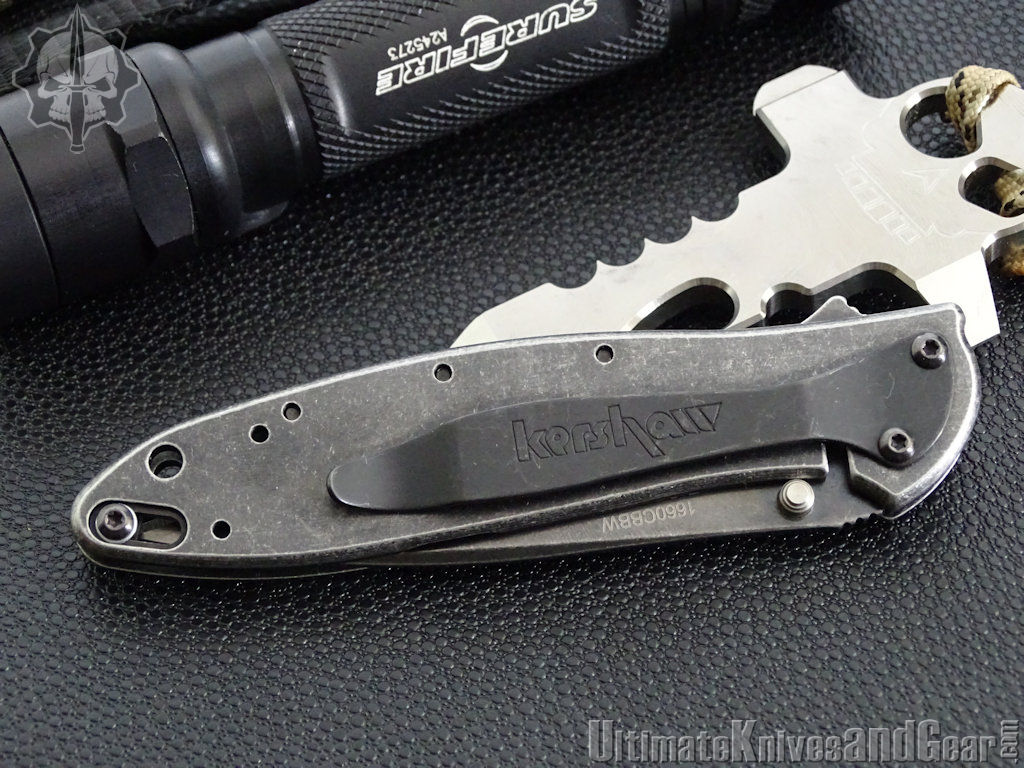 One of the factors that make the Leek very popular in the US is Kershaw's excellent distribution chain, but above all the price, which currently sells at well below the $ 40. The current average European price of the various Leek models is around 50 Euros (but sometimes even less on various online shops), climbing to around 100 euro for the versions with composite blade.

We tested the Leek doing some qualitative cutting test on various materials; the factory sharpening is well executed and the instrument, despite its small size, handled quite well. It should be mentioned, however, that the tip is overly thin so the knife must be used carefully, otherwise the rupture of a portion of the tip is highly likely. In this regard Kershaw, who probably recognized the limitation of this design, subsequently proposed a version with tanto blade called Random Leek. 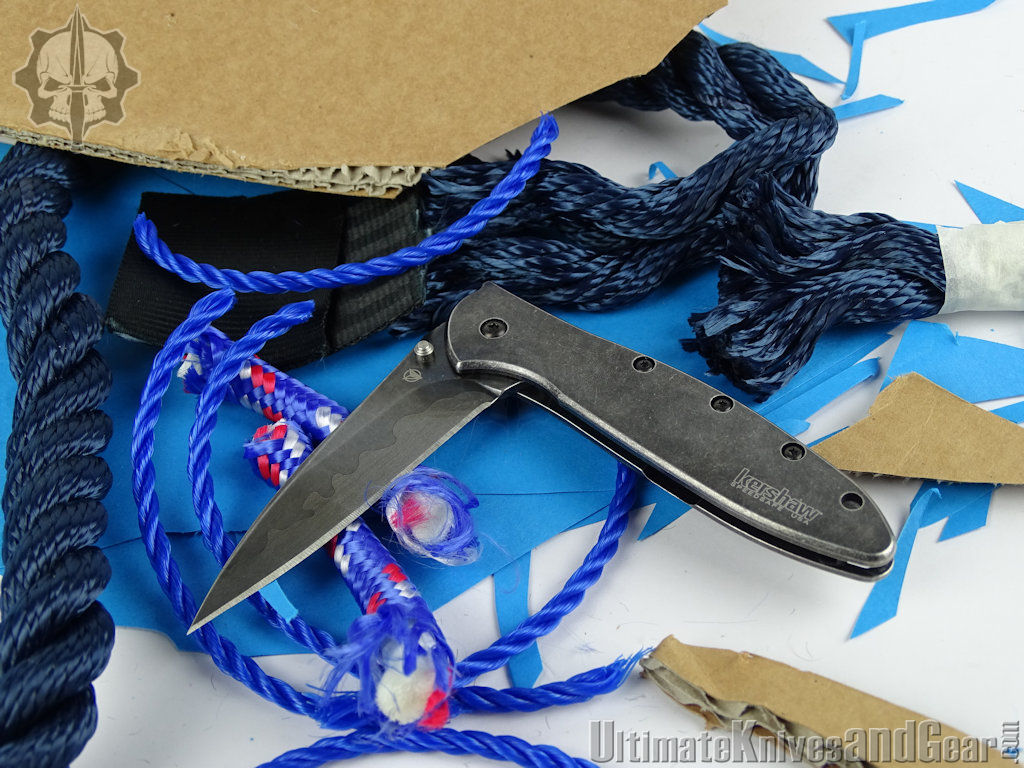 Another downside is that the handle is rather slippery; however we must consider that it is an EDC gentleman's knife, hence it should not be used for hard works, but it is also true that the constant feeling that the knife may slip out of ones hand is not at all pleasant.

Overall, the Kershaw Leek is a nice pocket knife of ideal size that offers Ken Onion style, excellent cutting performance of the composite blade, the Speedsafe ® assisted opening (either via flipper that thumbstud), frame-lock mechanism and Tip- Lock, all at a popular price.
The slippery grip and the extremely thin and fragile blade tip are still aspects that make this knife poorly suited to medium-heavy use, for which - it is fair to point out - it was not designed. As EDC gentleman's knife, the Leek is a perfect combination of size, weight, performance and elegance.

This article has been published on Armi&Balistica magazine n.61