Following the success of the first version produced by Extrema Ratio in 2006 of the 185 ° Reg.RAO, the eponymous knife renews its form with the new version, the RAO II.

Its predecessor had been conceived and developed for the Reggimento Ricognizione ed Acquisizione Obiettivi, (R.R.A.O - Target Acquisition Regiment of Italian Airborne), the regiment that was formed in 1941 as the 1st Parachute Regiment in Tarquinia and in '42 was renamed 185th Parachute Regiment "FOLGORE”.

The operational component of this regiment is highly specialized and is able to operate in conditions of absolute isolation, in complete autonomy for several days, and to survive and fight in harsh environments.
These soldiers undertake both strategic and tactical tasks, conducting covert missions behind enemy lines, to observe the magnitude of the forces in play, acquire targets and direct allied fire (air, sea and land) for their neutralization. Because of the type and mode of operations they perform, the motto of R.R.A.O. is "Videre nec Videri", Latin for “See without being seen”.
The need to work self-sufficiently and adapting to the environment requires compact and versatile equipment but, at the same time, is both robust and durable: the RAO has been developed taking into account these requirements.

Since the first version, the folding knife produced by Extrema Ratio has proved to be quite robust. This oversized folding knife has the ability to be both reliable and useful as a fixed blade knife, with the advantage of greater compactness. 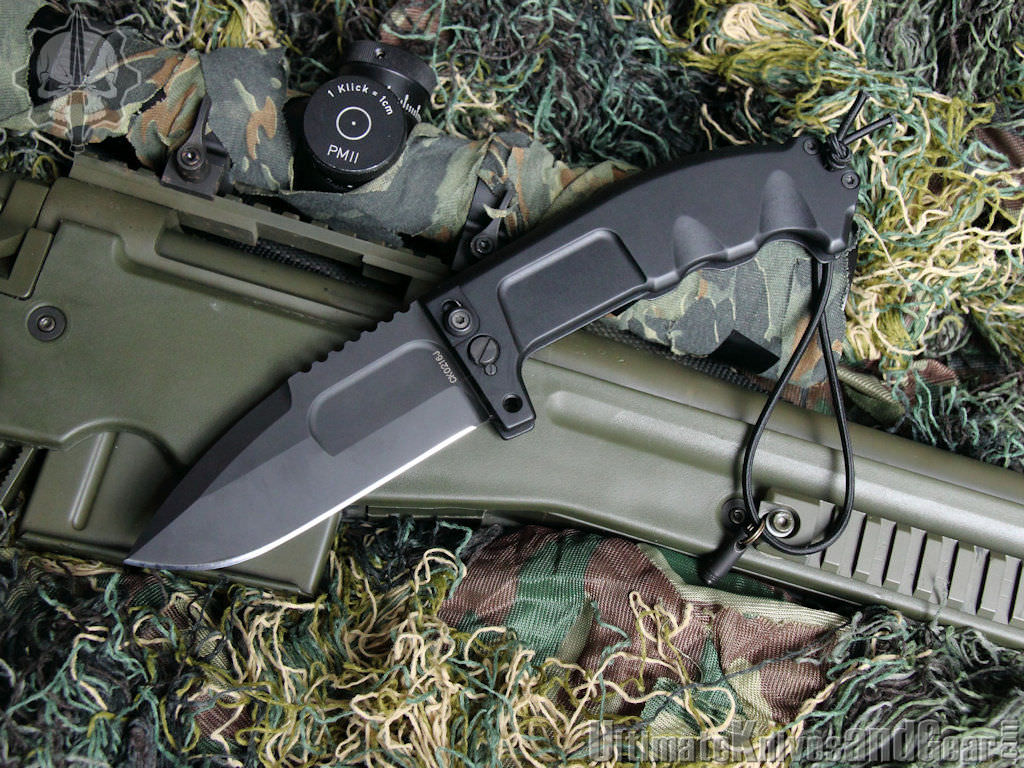 The RAO II, whilst maintaining the same design philosophy of its predecessor, has some differences and improvements. The blade, made of N690 steel (57-58 HRc) with burnished Testudo MIL-C-13924, has a drop point which certainly has much greater appeal than the modified tanto version used previously. With its 6.3 mm thickness, a length of 12 cm and a width of 4.4 cm, the blade is not afraid of heavy use.
On the blade spine there is an aggressive jimping to improve the knife grip, followed by a pronounced swedge that extends for half of the blade; the company logo is shown in the central area of the blade, while the model name is engraved on the handle spacer. 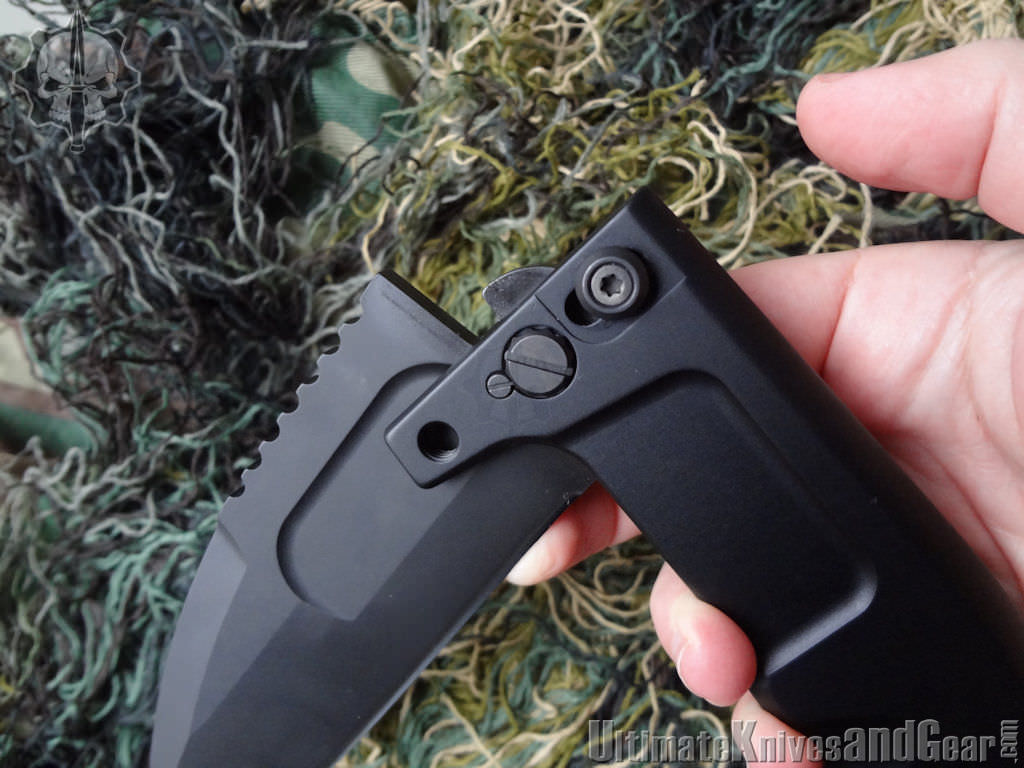 The heavy blade rotates fluidly, thanks to the presence of teflon washers around a big pivot which is adjustable by a flat screwdriver and lockable in the desired position through a small screw retainer (unlike the previous version that had a simple small torx screw). The lock mechanism is provided by a spring-backed ambidextrous pin, which is placed in the suitable seat formed on the blade tang and also acts at the same time as a release system to close the blade.

The handle, made of anodized aluminum Anticordal (alloy of aluminum, silicon and magnesium), has been made more comfortable than the squarer version of the first RAO; in fact all the edges of the handle grips have been smoothed so making it much more ergonomic.
Clearly the handle is devoid of the pocket clip, as this kind of transport would be very uncomfortable and inconvenient because of the size and weight of the product (322 g).
The wide steel spacer, on which is written the knife model name, extends into the end of the handle serving as a persuader (or glass-breaker). 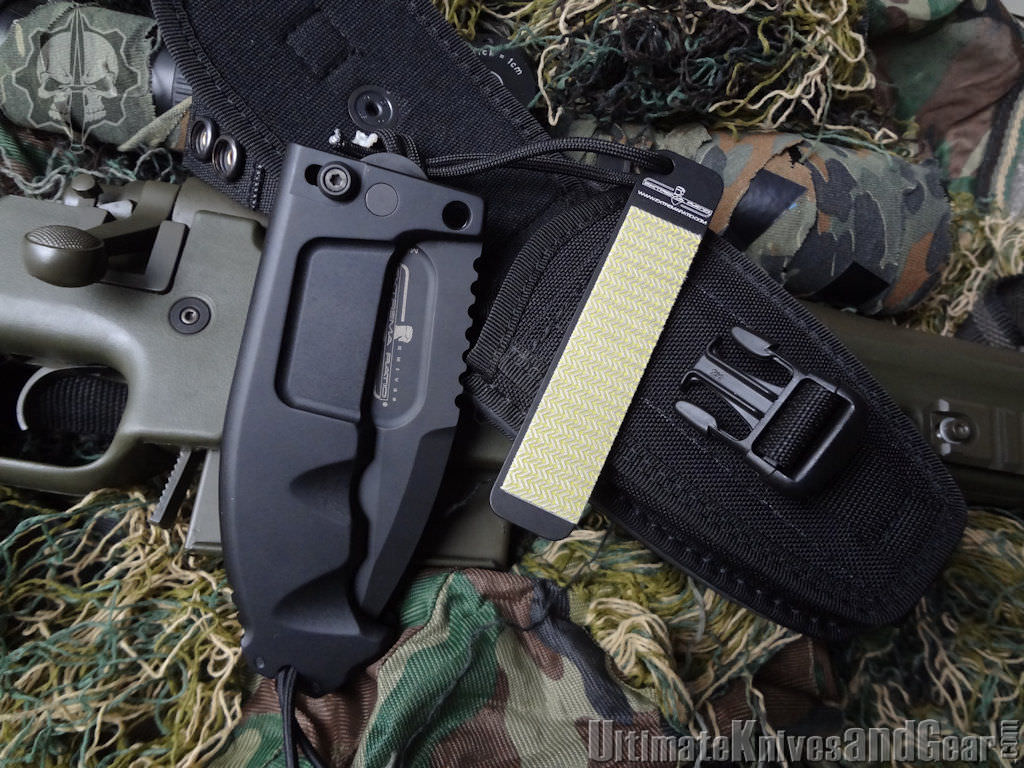 Given the substantial weight of the blade, exactly as in the first RAO, it is possible to use an additional safety pin to be screwed into the hole on the handle guard, thus avoiding any dangerous accidental closure of the blade when using the knife for heavy-duty operations (such as chopping or beating). The safety pin is fitted with an elastic lanyard that is also useful to ensure a better grip of the knife. 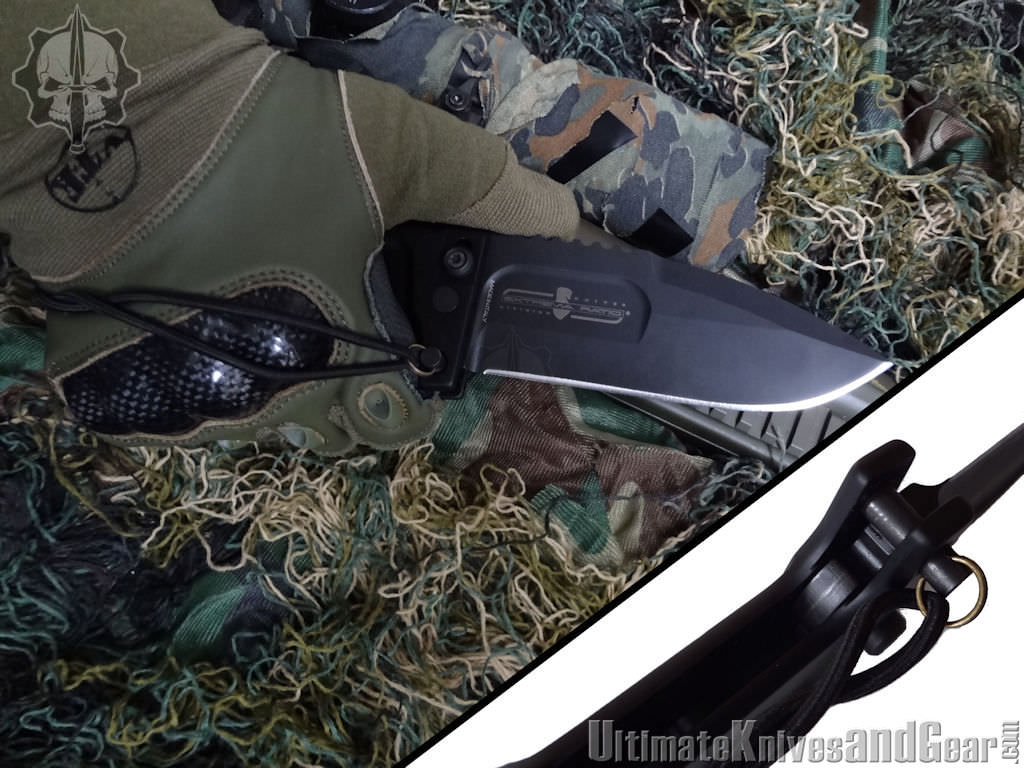 As in the previous version, with the RAO II there are still some aspects that could be taken into account to make improvements to the new product: the safety pin, when screwed in, causes an annoying twisting of the elastic lanyard (probably using an articulated head of the pin this problem would be easily resolved); the knife handle, in addition to having a very smooth surface, slightly undermines the grip in the absence of gloves (which is in any case something to avoid), is small in width (16 mm) compared to its overall size and the feeling is that when you grab the knife it doesn't fit the hand well. We understand that it was obviously a compromise to promote the compactness of the instrument.

The knife comes with a sturdy nylon sheath, well made with good quality materials and stitching. It is also MOLLE compatible and allows knife transport both in closed or open (like a fixed blade) positions, thanks to the presence of two distinct locations to house the instrument: the closed RAO II can be stored in the pocket, shaped on the knife (in tip-down position), with fastex closure; the seat of the knife has been made so as to be able to be carried in the open position in the back pocket, always ready to use. In a special pocket is placed a diamond pad emergency sharpener laminated on an anodized aluminum support. 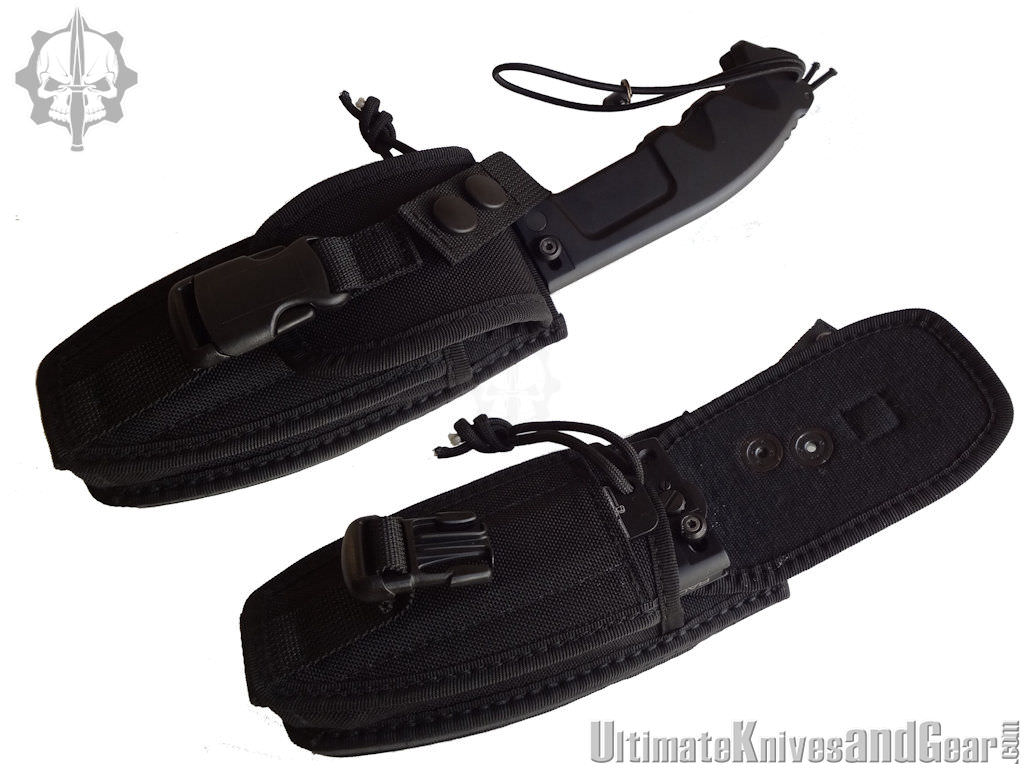 The RAO II not only has the appearance of robust knife, it is to, all effects and purposes, a tool able to withstand extreme usage. To test the knife we made some cutting tests on mooring ropes, with satisfactory results, and some chopping and beating tests which have demonstrated a surprising strength of the product, especially noting that it is a folding knife. 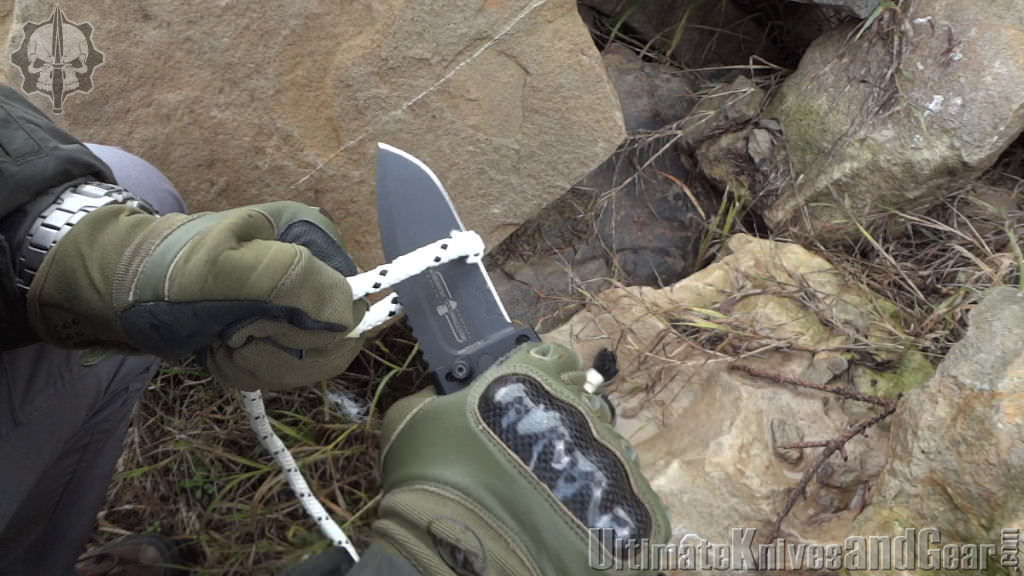 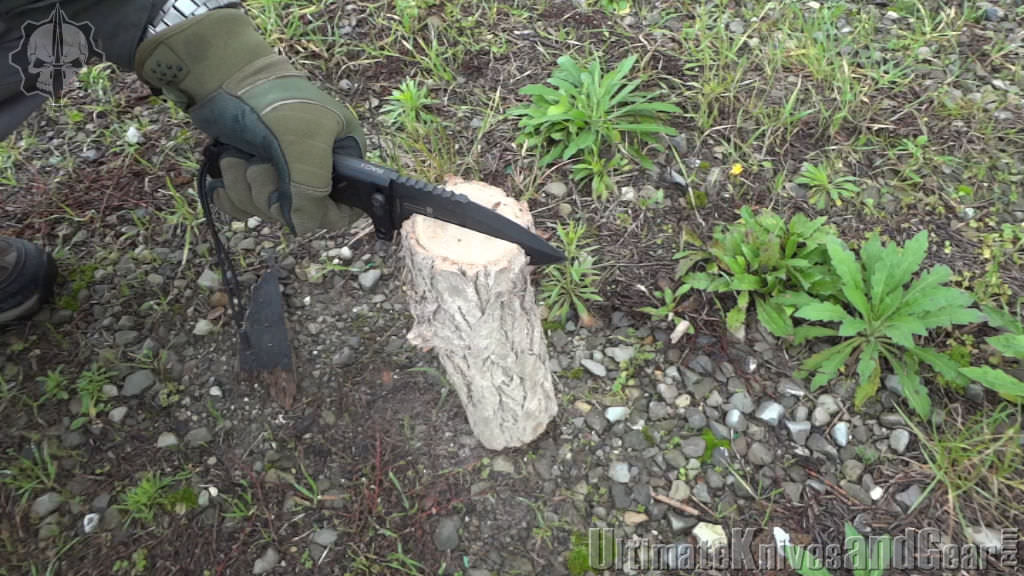 This mil-spec knife is in fact capable of combining hard use in the field, thanks also to the additional security system, with the convenience and versatility of transport, making it a reliable, durable and practical product.

This article has been published on the magazine "Armi&Balistica" n. 36