Created by the successful knife maker and designer Ken Onion, famous for his many collaborations with the world of production knives, the Halfachance is the modern version of the Parang of Southeast Asia.

The culture of the blades has always been deeply rooted in the lifestyle of the people of the Indonesian archipelago, which boasts a very wide variety of traditional machetes and swords. The people of Malaysia generally identify with the Parang , the jungle machete, a utility tool widely used for daily life in the rain forest.

There are numerous variations associated with these traditional blades, with forms that differ from region to region, sometimes in a very substantial way. In particular the Halfachance's blade seems to draw inspiration from a type of Parang widespread in the state of Sabah on the island of Malaysian Borneo, whose peculiarity is given by the convex edge and the blade that becomes wider and heavier towards the tip. 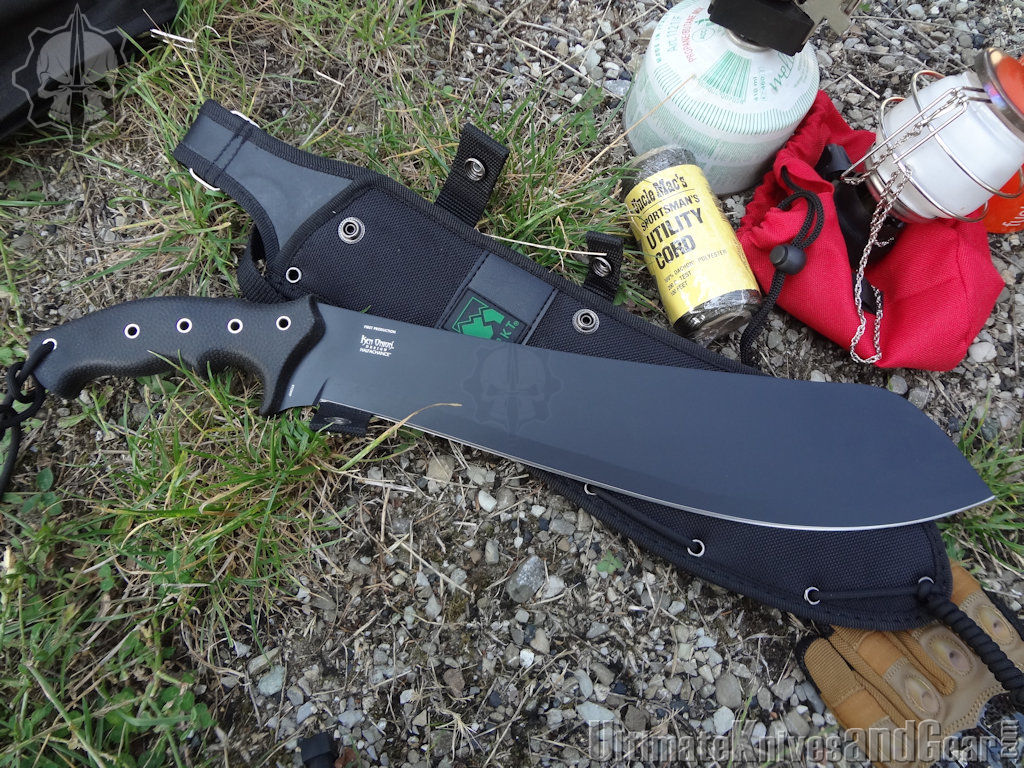 The Halfachance is one of the first machete produced by CRKT, along with the Chanceinhell machete, both presented by the renowned brand from Tualatin (Oregon - USA) in 2014 in their survival products line.
The full tang machete has a saber grind blade (at almost 1,2 cm from the edge), and is 36 cm length and 2.5 mm thick. The latter increases by a few tenths of a millimeter towards the tip.

The blade shape has been faithfully reproduced to that of the traditional Malaysian instrument, starting from a width of 5.2 cm at ricasso, and then gradually increasing up to a maximum of 7.5 cm at its widest point.
For its construction a Chinese spring carbon steel was used, the 65Mn hardened to 52-56 HRC. This material has a medium carbon content, formulated to achieve good wear resistance and good resilience, and it has been tempered at intermediate values to confer a good resistance to impacts.
The blade has a black powder coating, made after a prior bead blast (the surface preparation is in fact the most critical phase of the powder coating process). The advantage of the polymerization process from the powders is that it obtains a smooth and uniform surface which has excellent strength and durability, and is also capable of giving a pleasant finish from the aesthetic point of view.

The handle is formed by a polypropylene (PP) core coated with a thermoplastic rubber (indicated in a general way as TPR - Thermoplastic Rubber) that improves the grip handling, andthis gives it a faux pigskin texture. 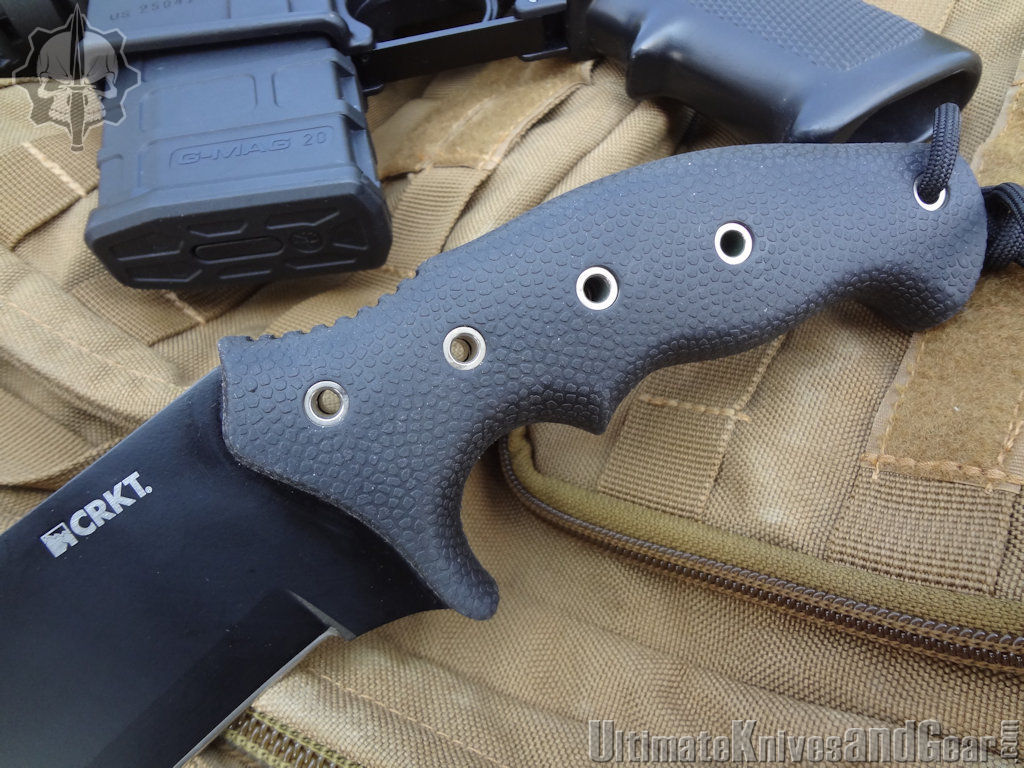 The handle has a catchy and forceful shape, with a negative angle which confers on the structure an almost pistol grip configuration. The handle is the most characteristic feature of this product and which immediately identifies Ken Onion's signature. The care of the handle design is rather unusual for a working tool such as a machete, but it gives it that extra touch that makes this tool very pleasant to look at.
Because of the handle shape peculiarity, with its pronounced curvature relative to the blade axis and with a thickness of about 3 cm, the assessment of its effective ergonomics becomes very subjective, and for each one of us it may be more or less comfortable than the conventional handles generally associated with these products.
Supplied with the machete is a good quality black paracord lanyard, which can be adapted in the preferred configuration, thanks to the presence of multiple holes along the handle (5 over the entire length). 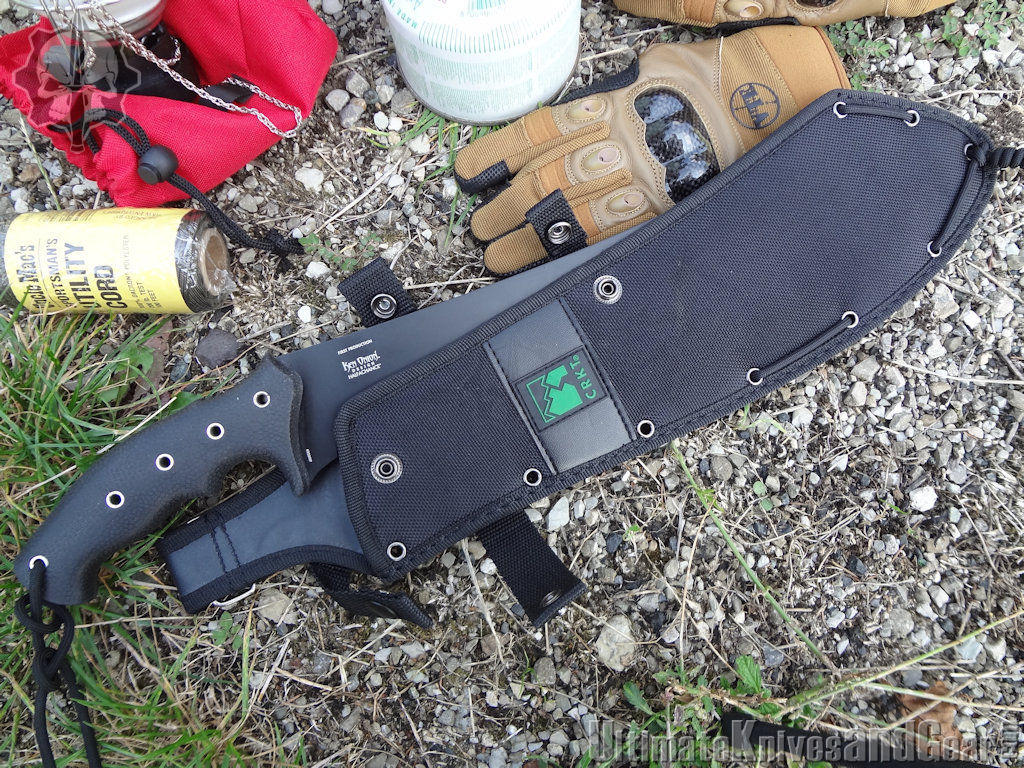 Particular attention has been paid to the creation of the semi-rigid sheath; it is well made and with reinforced stitching on the parts subjected to greater stress. This accessory is characterized by an external nylon structure reinforced with a leather-like insert, especially useful to simplify the maintenance and cleaning operations.
The sheath, shaped on the blade, has an upper side opening which extends to about 4/5 of its length. This solution significantly simplifies the tool sheathing and unsheathing. On the outside sheath, stitched on a leather-like strip, there is the company logo which is attractive without being ostentatious.
The machete retention on this sheath is guaranteed by 2 clips arranged along the opening side, and a third clip that acts on its guard. The sheath has been equipped with a single belt loop with a velcro adjustment; it also comes with paracord to facilitate mounting on backpacks or other media. The only critical observation for a really well made sheath is the single stitch used on the perimeter hem, that will inevitably unstitch (especially in the interior part of the sheath where the guard of machete goes to rub during its deployment) . 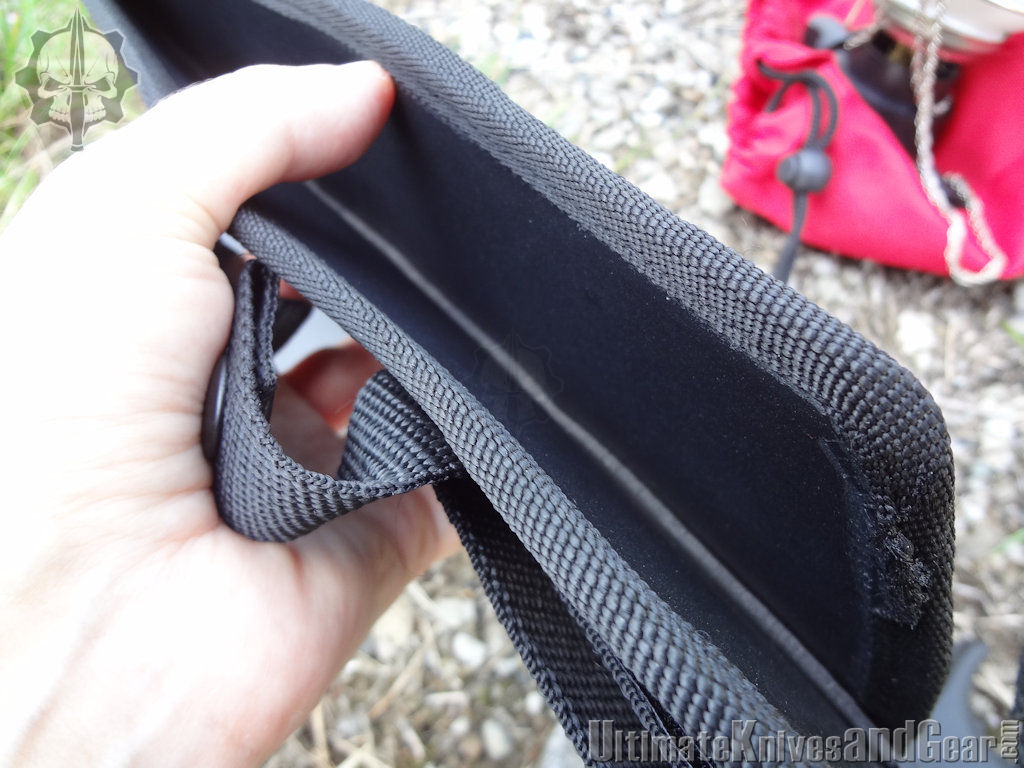 Despite us not having available the rich vegetation of rainforest, we tested the Halfachance in our woodland, clearing bushes and using it also on medium-small diameter branches and right up to chopping a seasoned hazel of about 15 cm diameter, going a bit over what would be the normal use of this tool. 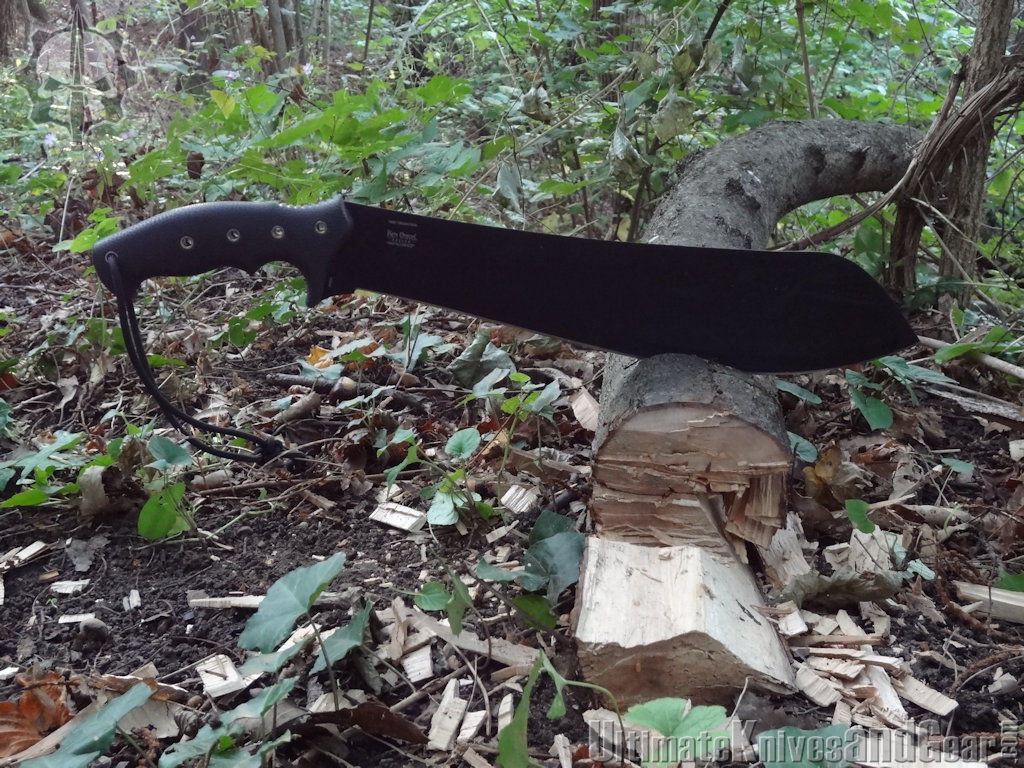 After a few hours of use we found, with some surprise, the excellent use of the handle, both from the ergonomic point of view on the shock absorption, without undergoing minimum hand fatigue, thanks also to the correct balance of the machete.
The blade is also provided with a good initial sharpness, but we still suggest sharpening it a little bit more before take it with you. It has also shown a good edge retention and at the same time also ease of sharpening, feature always welcome for this type of blades.

The Halfachance has proved to be a great outdoor and survival tool, designed and created for those who spend many hours in the bush, with a quality and an appeal that clearly is not comparable with the economic machetes on the market. Also this time Ken Onion has managed to reinvent a classical instrument like a machete, giving it an extremely attractive look.

This article has been published on the magazine "Armi&Balistica" n.38